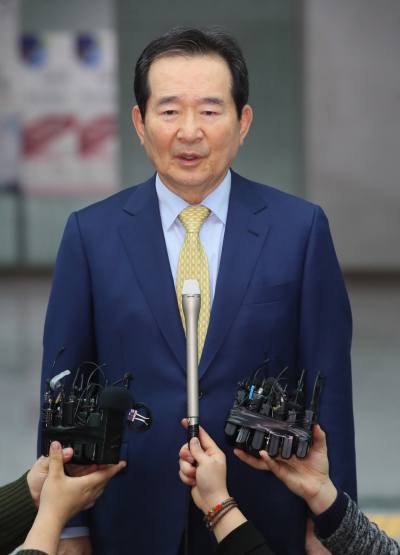 It was the first time for a former National Assembly speaker to be named prime minister. Chung, a former chairman of the ruling Democratic Party (DP), served as the speaker from June 2016 till May 2018.

Chung needs National Assembly approval after a confirmation hearing to be formally appointed to the post.

“I want to recruit Rep. Chung as the second prime minister of the administration,” Moon said Tuesday as he made the announcement in person in the press center of the Blue House.

Moon said he decided to nominate Chung because of his expertise in economics and politics. “Although the situations at home and abroad are difficult in various ways, the prime minister nominee will lead the cabinet by prompting reconciliation and cooperation and treating the people’s livelihoods and the economy as priorities,” Moon said. “He will give the people a sense of trust and stability.”

Moon said Chung is an expert in economics and politics. “He was a successful businessman,” Moon said. “As commerce minister in the Roh Moo-hyun administration, he opened the era of $300 billion in annual exports for Korea.”

“He is also a six-term lawmaker with abundant experience and political abilities, who served as chairman of a political party and speaker of the National Assembly,” Moon said. “Most of all, Chung is known for his gentle character. He values dialogue and compromise and always listens to others.

“I first had some reservations about recruiting a former head of the legislature as the prime minister,” Moon continued. “But I made the decision because his ability to respect and work with opposition parties and unite and reconcile people is important in this time of extreme political confrontation.”

Moon also thanked Prime Minister Lee Nak-yon, who has served in the post since May 2017. “Because he is deeply trusted by the people, I believe it is necessary to let him go to do his own politics,” Moon said, referring to Lee’s decision to return to the DP ahead of next year’s general election.

Following the announcement, Chung held a press conference at the National Assembly to accept the nomination. “I will do my best to revive the economy and unite the people,” he said.

Chung also addressed concerns about the separation of powers being violated if a former National Assembly speaker serves as prime minister. “I seriously thought about the concerns,” Chung said. “But I decided to accept the nomination if there are things I can do to serve the people.”

Chung, 69, is a native of Jinan County, North Jeolla. He started his career as an office worker at the SsangYong Group in 1978. He left the company in 1995 after serving as an executive.

He entered politics in 1996 by winning a parliamentary seat from his home district. Since then, he retained the seat in three consecutive elections. In 2012, he switched to Seoul’s Jongno District and won that seat. He was re-elected from the district in 2016.

The main opposition Liberty Korea Party (LKP) issued a statement urging Moon to cancel Chung’s nomination because it violates the spirit of the separation of powers.

“Nominating Chung as prime minister is an insult to the constitution and an outrageous act to disrupt the order in state affairs,” said Rep. Jun Hee-kyung, spokeswoman of the LKP.

She said it is a responsibility of a National Assembly speaker to check the president’s power under the principle of the separation of powers. “And yet, the president made the nomination, and Chung accepted it. They both shamelessly ignored the principles of the constitution and democracy,” Jun said.

Jun said Moon is running the country as a dictatorship by hiring a former speaker as his prime minister while using the incumbent speaker to operate the legislature to please his administration. She made clear that the LKP will resist the nomination in the upcoming confirmation process.