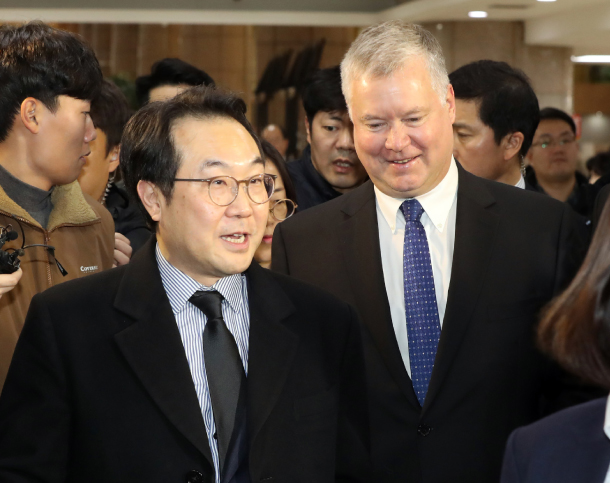 China and Russia are working on a resolution for the United Nations Security Council that would provide North Korea partial sanctions relief, ostensibly to encourage dialogue between Washington and Pyongyang.

On Monday, China and Russia circulated a draft resolution calling for the 15-member Security Council to lift a ban on North Korea’s exports of seafood, textiles and statues and exempt inter-Korean rail and road cooperation projects from UN sanctions.

The draft resolution also called for a lifting of a ban on overseas North Korean workers, lucrative sources of foreign exchange for the regime to fund its weapons of mass destruction programs. UN Security Council Resolution 2397 of December 2017 required such overseas workers to be repatriated by Dec. 22 of this year.

This draft also called for the exemption from sanctions of things related to “infrastructure construction” as well as for humanitarian and livelihood purposes because they “cannot be diverted” to the North’s “nuclear and ballistic missile programs.”

“We’re not rushing things,” Russian Ambassador to the UN Vassily Nebenzia was quoted as telling Reuters Monday, stressing that the sanctions they proposed lifting were “not directly related to the North Korea nuclear program” but rather “a humanitarian issue.”

He said “the whole idea” of the resolution was to “facilitate” dialogue between the United States and North Korea.

The draft resolution welcomed the continuation of dialogue between the United States and North Korea “at all levels” to build mutual confidence and encourage “efforts to build a lasting and stable peace on the Korean Peninsula in a staged and synchronized manner,” in accordance with the joint statement issued after the first North-U.S summit in Singapore on June 12, 2018.

This draft asks the so-called 1718 sanctions committee to “adopt the most favorable approach” on requests for exemptions on sanctions against North Korea for humanitarian and livelihood purposes, including exempting inter-Korean railway and road cooperation, an infrastructure project initiated in the April 27, 2018, inter-Korean Panmunjom Declaration. Seoul has faced difficulties going ahead with those projects because of UN sanctions. 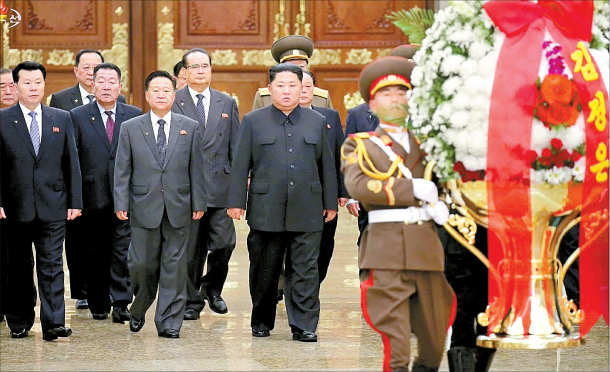 North Korean leader Kim Jong-un, third from left in front row, visits the Kumsusan Palace of the Sun in Pyongyang to pay tribute to his late father, Kim Jong-il, as the North marks the eighth anniversary of the former leader’s death in this photo released Tuesday by North Korea’s official Korean Central News Agency. [YONHAP]

It also calls for the “prompt resumption” of six-party talks among China, Japan, Russia, the United States and the two Koreas - stalled since late 2008 - or the launching of “multilateral consultations in any other similar format” aiming to facilitate “a peaceful and comprehensive solution through dialogue” to reduce tensions in the region.

However, a U.S. State Department official in a statement said “now is not the time” for the Security Council to consider “offering premature sanctions relief” to North Korea. The U.S. official noted the North’s recent threats to conduct an escalated provocation and refusal “to meet to discuss denuclearization” while “continuing to maintain and advance its prohibited weapons of mass destruction and ballistic missile programs.”

Pyongyang has set a deadline for Washington to come up with a different approach by the end of the year, warning it may take an alternative path otherwise. This could include possibly a test of an intercontinental ballistic missile.

U.S. President Donald Trump told reporters at the White House Monday on the situation with the North, “I’d be disappointed if something would be in the works, and if it is, we’ll take care of it.”

He continued, “North Korea, we are watching very closely.”

After the abrupt collapse of the second summit between North Korean leader Kim Jong-un and Trump in Hanoi, Vietnam, on Feb. 28, Pyongyang’s top diplomat in a rare press conference explained that his country had proposed partial sanctions relief in exchange for the permanent dismantlement of its key Yongbyon nuclear complex.

North Korean Foreign Minister Ri Yong-ho said, “What we asked was a partial lifting of sanctions, not the entirety.” He specified that Pyongyang sought relief from five UN sanctions imposed in 2016 and 2017 that hurt the country’s economy and particularly ones that hamper the livelihoods of ordinary people, out of a total of 11 Security Council sanctions.

In turn, Ri said North Korea would “permanently and completely dismantle” all its nuclear material production facilities, including plutonium and uranium, in Yongbyon in the presence of U.S. experts. The U.S. special representative for North Korea, Stephen Biegun, wrapped up a three-day visit to Seoul Tuesday on which he met President Moon Jae-in and officials from the National Security Office, Foreign Ministry and Unification Ministry.

There had been expectations that his visit could revive diplomacy with the North, and Biegun during a press conference in Seoul Monday said he briefed the Security Council last week saying Washington has offered “any number of creative ways to proceed with feasible steps and flexibility in our negotiations to reach balanced agreements” with Pyongyang, without elaborating further.

A South Korean Foreign Ministry official said specifying such steps was a topic of conversation during Biegun’s talks with his South Korean counterpart Lee Do-hoon.

China and Russia, who have traditionally backed North Korea in the United Nations, as well as France, Britain and the United States are the five veto-wielding permanent members in the Security Council but have been split on the sanctions issue.

Last week, the New York City-based Security Council convened a meeting on North Korea amid concerns over Pyongyang’s continued missile provocations, in which the top diplomats of China and Russia encouraged the lifting of some sanctions especially for humanitarian reasons. France and Britain supported retaining sanctions during this meeting. British Ambassador Karen Pierce stressed that Security Council sanctions will remain in place until North Korea takes concrete steps towards denuclearization.

Zhang Jun, China’s ambassador to the UN, said Beijing called for “adjustment” of the sanctions for humanitarian reasons and in order to create an atmosphere conducive to political settlement of the issues.

Seoul said it is in close communication with members of the Security Council. “I am aware that the resolution has been submitted and will be discussed in the Security Council,” said Kim In-chul, spokesman of the South Korean Foreign Ministry, in a press briefing in Seoul Tuesday. “Our government is closely communicating with key Security Council member states and monitoring the related situation. In the current stage, what is more important than anything else is resuming the North-U.S. working-level dialogue as soon as possible and making actual progress in the complete denuclearization and establishment of permanent peace on the Korean Peninsula, and it is important that the international community work in this direction.”