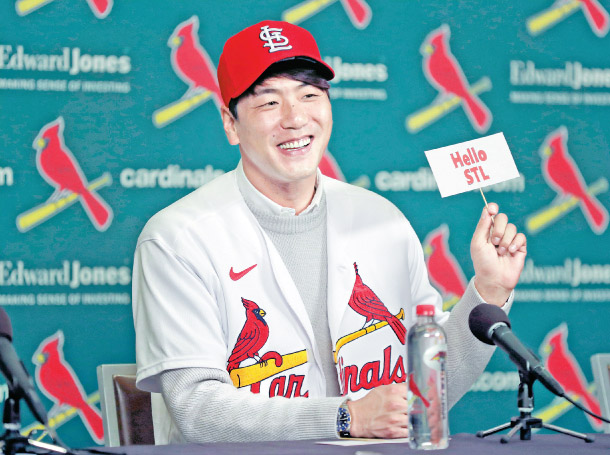 St. Louis Cardinals pitcher Kim Kwang-hyun smiles as he holds up a sign during a press conference at Busch Stadium in St. Louis on Tuesday. [AP/YONHAP]

Kim Kwang-hyun will be leaving the KBO and fulfilling his dream of playing in the major leagues after signing a two-year contract with the St. Louis Cardinals at $8 million, with up to $3 million in incentives, on Tuesday, local time.

“I am very excited and nervous,” Kim said during a press conference. “I think the 2020 season will be a very important season for me, so I’m very excited. Since I was young, even people who didn’t really know about baseball had heard of the St. Louis Cardinals. Since it’s the most prestigious club in the National League, I feel honored to be playing for them.”

The signing not only bestows Kim with the honor of wearing a No. 33 next season but also means he has become the fourth KBO player to join the major league through a posting system. After the World Baseball Softball Confederation (WBSC) Premier 12 ended last month, Kim announced his desire to play in the major leagues, and after a few meetings with his former KBO club, the SK Wyverns decided to post Kim. The Wyverns will receive a $1.6 million posting fee from the Cardinals.

“We had a lot of analytical support that backed up the success he’s having over in the KBO, and we looked at our needs, especially if you look at the left side of our pitching, it made a lot of sense to pursue this,” said the Cardinals’ president of baseball operations John Mozeliak at a press conference. “Over the past couple of weeks, as we were exploring the trade market, the free-agent market, it brought us back to KK [Kim’s nickname]. We’re really excited that we were able to get this done.”

Although Kim is not yet fully guaranteed a starting spot, his addition is expected to strengthen the Cardinals’ pitching team, which was in need of left-handed pitchers. As the Cardinals’ likely candidates for the starting positions are right-handed pitchers, Kim is expected to have a fair shot at becoming the club’s lefty starter, but he will have to compete for the spot in Spring Training.

“He’s going to come to camp, get stretched out and he’s going to get every opportunity to be a starter,” Mozeliak said. “Most importantly, I don’t want to represent him as a swingman, I want to represent him as a starter. He knows that if it doesn’t work out in the rotation, he can go to the bullpen. This is just an opportunity that gave us some protection going into Spring Training.”

Mozeliak said the Cardinals’ decision to sign Kim made it a lot easier as Kim was flexible playing in the bullpen. Kim’s primary goal is to become the club’s starter, but he said he is willing to take any role the Cardinals want him to.

If Kim does earn his spot as the Cardinals’ starter, he will have a shot at continuing the success of the Korean players in the major league before him, such as Park Chan-ho and Ryu Hyun-jin, who both played for the Los Angeles Dodgers.

“As a Korean pitcher, I first dreamed [of playing in the majors] after watching Park Chan-ho and Ryu Hyun-jin,” Kim said. “It’s an honor for me to play on the mound that they’ve played on. It’s very meaningful.”

Kim only played for the Wyverns during his KBO career. Although he took the entire 2017 season off due to an elbow surgery, he still made an impressive comeback in 2018, picking up 11 wins and eight losses with a 2.98 ERA. This season, Kim once again fulfilled his role as the Wyverns’ leading starting pitcher, picking up 17 wins and six losses with a 2.51 ERA.

This is actually the second time that Kim was posted. After the 2014 season ended, Kim was posted for the major league for the first time. Although the San Diego Padres showed great interest in Kim, he wasn’t able to reach an agreement on a contract within the negotiation period.

However, this time, his decision came earlier than expected. He was posted for the MLB clubs on Dec. 5 and he had until 5 p.m. on Jan. 5, next year to negotiate his contract. Kim’s contract was a quick one as he signed his contract less than a day after completing his physicals.

By joining the Cardinals, Kim is now the second Korean pitcher to play for the club. Before Kim, Oh Seung-hwan, now of the Samsung Lions, also made his big league debut with the Cardinals back in the 2016 season. Throughout Oh’s two seasons with the Cardinals, he picked up seven wins, nine losses and 39 saves with a 2.85 ERA throughout 138 games.

Kim said part of his decision to join the Cardinals was due in part to the good things he heard about the club from Oh.

“Seung-hwan told me that this was the best club that he played for [throughout his career in the United States],” Kim said. “When I go back, I’m going ask him more about the rules of this club.”