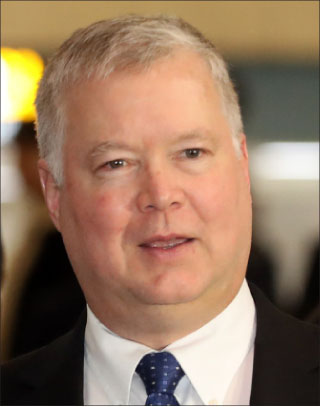 Stephen Biegun, the U.S. special representative for North Korea, will make a previously unannounced trip to China starting Thursday, seen as a move to make sure Beijing is on the same page as Washington on Pyongyang’s denuclearization.

The U.S. State Department said in a statement on Tuesday that Biegun, nominated as the next deputy secretary of state, will visit Beijing Thursday and Friday to meet with Chinese officials “to discuss the need to maintain international unity on North Korea.”

The State Department in their original press release of Biegun’s trip to Asia last week said that he will travel to Seoul and Tokyo from Sunday to Thursday and had not mentioned a stop in Beijing.

The trip comes as North Korea remains mum on the U.S. proposal to continue talks. Pyongyang set a year-end deadline threatening that it would take a different path if the Washington failed to come up with a different approach. The silence by North Korea during Biegun’s visit to the region contrasts to a string of bellicose statements by North Korean officials up until recent days.

China and Russia are pushing for a draft resolution in the United Nations Security Council calling on partial sanctions relief including the lifting of bans on North Korea’s exports of seafood and textiles.

The resolution also calls to lift a ban on North Korean overseas workers, who are expected to be repatriated by Dec. 22 of this year under a 2017 resolution and exempt inter-Korean rail and road cooperation projects from UN sanctions.

While China and Russia, veto-wielding permanent members of the Security Council, have often stood up for North Korea and backed an easing of the tough sanctions, this is the first time they have submitted such a draft resolution calling for relief on some of these sanctions.

The draft resolution calls on the council to lift some sanctions, namely those dealing with humanitarian and livelihood issues, from a series of tough resolutions passed by the council in 2016 and 2017, claiming it is to encourage dialogue between the United States and North Korea. But the U.S. State Department has called any sanctions relief at this time “premature.”

On Tuesday, the U.S. Senate passed a $738 billion defense bill, or the National Defense Authorization Act for 2020, which includes so-called secondary sanctions on financial institutions that conduct illegal business with North Korea, which especially affect Chinese banks. The Otto Warmbier North Korea Nuclear Sanctions Act is named after the American student who died in 2017 shortly after being released by North Korea in a vegetative state following 17 months of captivity.

During his visit to Beijing, Biegun is expected to meet with his Chinese counterpart, Vice Foreign Minister Luo Zhaohui, and other officials. He may ask China to maintain sanctions on North Korea during the trip.

Biegun stated in a press conference Monday in Seoul in a direct message to North Korea, “We are here and you know how to reach us,” while stressing that the United States “does not have a deadline” on the negotiations.

He noted that Christmas Day is “one of the most sacred holy days on our calendar” and that “it is our fervent prayer and hope that this day will usher in a season of peace.”

His remarks seemed mindful of North Korea’s promise of a “Christmas gift” to the United States, seen by analysts to be the possible launch of a long-range ballistic missile. This would be a turnaround from North Korea’s moratorium on nuclear and intercontinental ballistic missile tests since late 2017 in the spirit of dialogue with the United States.

While Biegun’s schedule Monday was jam-packed with a relay of meetings with Seoul officials topped by a dinner reception hosted by the Korean Foreign Ministry, Tuesday was more low-key and included a closed-door lecture at Yonsei University, western Seoul. South Korean top nuclear envoy Lee Do-hoon accompanied Biegun to the airport before the U.S. envoy departed for Tokyo Tuesday afternoon to take advantage of every moment to discuss North Korea matters.

Expectations that Biegun could meet North Korean officials at the inter-border village of Panmunjom during his three-day visit to Seoul were not met.