Defense cost being negotiated is lower than $5B: DeHart

Defense cost being negotiated is lower than $5B: DeHart 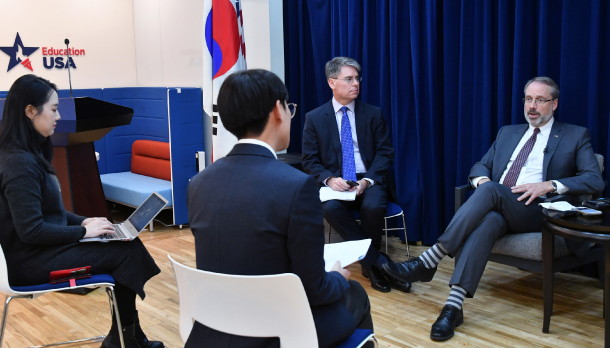 James DeHart, right, the U.S. chief negotiator for the defense cost-sharing agreement between Seoul and Washington, sits for an interview with Korean reporters at the American Center Korea in Yongsan District, central Seoul, Wednesday. [YONHAP]

James DeHart, the U.S. chief negotiator for the defense cost-sharing agreement, in a press briefing Wednesday, said that the total cost being negotiated currently is lower than the $5 billion that has been reported in media.

“I do want to say very importantly there have been some big figures that have been repeated many times in the Korean media, and those figures do not reflect where we are in our discussions with the Republic of Korea today,” he told Korean reporters at the American Center Korea in Yongsan District, central Seoul.

“We have adjusted and we have compromised as well because that is what happens in discussions between close allies and when both sides are trying to get to an agreement, he said. “We are looking for that compromise as well from the government, and I’m confident that we can have a successful result. So, we will keep working and continue the talks in January.”

Korea and the United States held a fifth round of talks in Seoul over Tuesday and Wednesday to renew their bilateral Special Measures Agreement (SMA) for the upkeep of the 28,500 U.S. troops here, as the current one-year deal is set to expire on Dec. 31.

This is the second time Jeong Eun-bo, Korea’s chief negotiator for the 11th SMA, and DeHart, the senior adviser for security negotiations and agreements in the U.S. Department of State’s Bureau of Political-Military Affairs, met this month.

The Korean Foreign Ministry in a statement Wednesday after the talks concluded said that the two sides stressed reaching a “fair, reasonable and mutually acceptable agreement.”

It added that “amid differences in positions between the two sides on various issues,” they will continue close consultations to widen their scope of understanding to come up with a deal acceptable to both sides. The next round of talks will resume in January, added the ministry.

Negotiations for the 11th SMA kicked off in September, and their meeting in late November in Seoul was cut short when DeHart walked away from the negotiating table and held a rare solo press conference calling for Seoul to come up with a “new proposal.” The fourth round of talks was held in early December in Washington. DeHart arrived in Seoul Sunday for the fresh dialogue as the two sides continue to work toward narrowing differences.

Washington has reportedly been demanding Seoul to pay a nearly fivefold increase in contributions, or nearly $5 billion. Under the current one-year 10th SMA signed in February, Seoul agreed to pay 1.04 trillion won, which amounted to some $920 million at the time of implementation, or around 8.2 percent more than what Korea spent in the 9th SMA.

The United States is seen to be pushing to include a new category in the agreement, first signed in 1991, to get Korea to cover areas beyond the cost of personnel, construction and logistics. Seoul is maintaining the current framework of the SMA must be preserved. Seoul has been mulling deploying its military forces to take part in a U.S.-led coalition to defend the Strait of Hormuz. Seoul has decided to initially shoulder the massive decontamination cost for the four U.S. military bases returned to the Korean government and also has been emphasizing its previous and future massive weapons purchases from the United States. Korea has also paid for 92 percent of the cost for building Camp Humphreys, the largest U.S. overseas base.