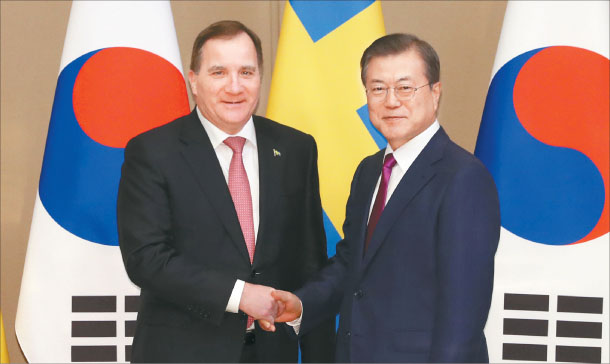 Korean President Moon Jae-in, right, and Swedish Prime Minister Stefan Lofven, left, pose for a photo in the Blue House before holding a summit on Wednesday. Lofven made a three-day official visit to Seoul to mark the 60th anniversary of diplomatic relations. [YONHAP]

President Moon Jae-in on Wednesday continued to push for his campaign of a peace economy at a forum attended by businessmen from Korea and Sweden.

Moon and Swedish Prime Minister Stefan Lofven, who is currently on an official three-day visit to mark the 60th anniversary of diplomatic relations, attended the Korea-Sweden Business Summit in the afternoon at a Seoul hotel. Following the event, Moon and Lofven held a summit at the Blue House.

“The peace of the Korean Peninsula will lead to the connection of continental and maritime networks,” Moon said in his speech at the business forum. “When roads and railroads of the two Koreas are linked, overland routes will be opened to Scandinavia through the Eurasia continent.”

“Sweden is proof that peace is economy and economy is peace,” Moon also said. “The Korean Peninsula’s peace will offer more opportunities to companies of Korea and Sweden.”

He, then, urged businessmen of Korea and Sweden to contribute to the peace of the peninsula and Northeast Asia and the advancement of free trade order.

Moon’s speech at the business summit was made as North Korea’s key allies are trying to exclude the inter-Korean railroad and road projects from a list affected by international sanctions. China and Russia are working on a resolution for the United Nations Security Council that would provide the North partial sanctions relief, ostensibly to encourage dialogue between Washington and Pyongyang.

China and Russia circulated a draft resolution on Monday, calling for the 15-member Security Council to lift a ban on North Korea’s exports of seafood, textiles and statues and exempt inter-Korean rail and road cooperation projects from UN sanctions. It, however, will unlikely pass, because the United States made clear that “now is not the time” to consider “offering premature sanctions relief” to the North.

In recent years, Sweden has also played a role in engaging North Korea in dialogue. In 2017, the country named Kent Harstedt, a lawmaker, as its special envoy for Korean Peninsula affairs. Stockholm was the venue for negotiations between the two Koreas and the United States in January this year and working-level negotiations between North Korea and the United States in October.