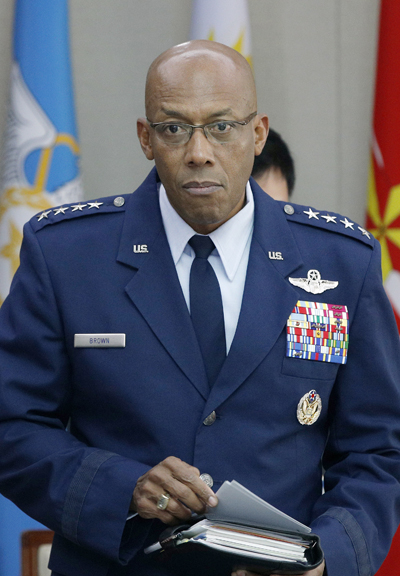 The top commander of U.S. aerial forces in Asia on Tuesday said the “Christmas gift” promised by North Korea will be a long-range ballistic missile test, to which Washington was considering “all complete options” in response.

Gen. Charles Brown, who commands the Pacific Air Forces, told reporters during a breakfast roundtable in Washington that while there were “a range of possibilities that could occur,” he expected a long-range ballistic missile test, adding it was “just a matter of” whether the provocation comes on Christmas Eve, Christmas Day or after the New Year.

Another possibility Brown mentioned was the North announcing it will backtrack on its self-imposed moratorium on nuclear and long-range ballistic missile tests - “but then doesn’t shoot.”

The commander’s predictions came after North Korea twice conducted tests at its Sohae Satellite Launching Station in North Pyongan Province on Dec. 7 and 13, escalating tensions as its self-imposed year-end deadline for denuclearization negotiations and a change in U.S. attitude draws near.

The United States and South Korea have attempted to dial down actions that Pyongyang could construe as aggression, including a decision to suspend a combined military exercise originally slated for December, but the North continues to insist Washington must lift its “hostile policy” threatening the country’s economy and security.

Saying the job of the U.S. military was to “backstop the diplomatic efforts,” Brown nonetheless stressed that the United States has “got to be ready” in case diplomacy does fail. The reason a major provocation is anticipated, Brown said, was “a pattern you see with the North Koreans ... Their rhetoric precedes activity, which precedes a launch.”

While the possibility of Pyongyang firing a long-range missile, possibly an intercontinental ballistic missile (ICBM), has been cited by many international experts as likely this year, some have raised doubts about whether the North is willing to risk any action that could impair its ability to return to future negotiations.

In a press conference on Wednesday, scholars from the Korea Institute for National Unification (KINU), South Korea’s government research institute studying the North, said the “new path” North Korea says it will pursue is not so much a fixed plan but an evolving process in which the regime considers a variety of different options to pressure Washington.

“If the North launches an ICBM from the beginning [of its pursuit of a new path], then its options become severely limited,” said Hong Min, chief of the North Korean research division at KINU. “This will in turn impel the United States toward a hard-line policy toward [the North].”

Kim Gap-sik, head of KINU’s unification policy research division, said it was also unlikely that a missile launch would come before Christmas, since a trilateral summit among South Korea, China and Japan is due to be held in Beijing on Dec. 24.

“Given the North’s improving relationship with China, it will not be easy for North Korea to risk a provocation at the year’s end,” Kim said.

“A major provocation would need to be preceded by a policy shift announcement of some sort, which will need to emerge from a plenary session of the Central Committee of the Workers’ Party.”

The North’s state media announced on Dec. 4 its ruling party would be convening a plenary meeting near the end of the month “in order to discuss and decide on crucial issues in line with the needs of the development of the Korean revolution and the changed situation at home and abroad.”

It is widely believed that North Korean leader Kim Jong-un may use the occasion to announce a pivot in his policy toward the United States to coincide with the year-end deadline, which Hong said could be a declaration by the dictator that dialogue with the United States has ended.

According to KINU, while the North could also be expected to conduct a provocation teetering on the brink of breaking its moratorium, a likely scenario is that it will try to “muddle through” with the present situation to prevent an irrevocable return to hostilities.