The $210 million is just the beginning. AstraZeneca committed a total of $630 million through 2024 to biotech and health care in Korea during the Korea-Sweden Business Summit held in Stockholm in June.

AstraZeneca, which reported $22.1 billion in total revenue last year, said the investment is geared toward contributing to Korea’s vision to raise its share in the global biohealth sector from 2 percent to 6 percent by 2030.

During another Korea-Sweden Business Summit, held Wednesday during Swedish Prime Minister Stefan Lofven’s visit to Korea, AstraZeneca Chairman Leif Johansson signed a memorandum of understanding for the investment and future collaboration with four agencies in Korea.

The signing ceremony was attended by Minister of Trade, Industry and Energy Sung Yun-mo and Minister of Health and Welfare Park Neung-hoo. 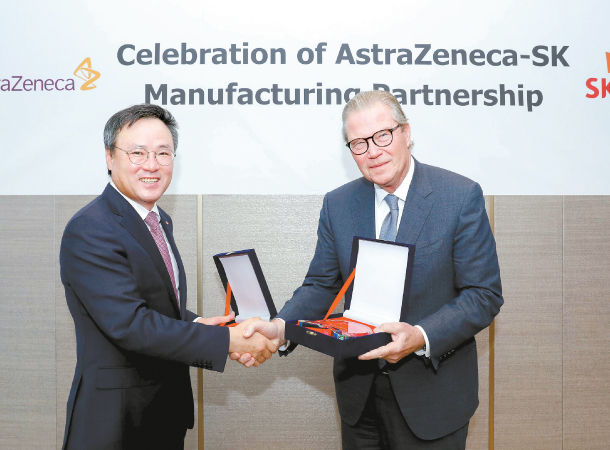 “As a major investor for Korea’s R&D projects and an innovative pharmaceutical company selected by the Ministry of Health and Welfare, AstraZeneca is honored to ink a partnering relationship with the four agencies trusted in Korea,” Johansson said in a statement.

“Through the agreement, we wish to strengthen innovation in the Korean biohealth industry and ultimately contribute to Korea’s health and well-being.”

The four entities are also planning to collaborate with AstraZeneca to find ways to utilize artificial intelligence technology in drug development.

During his visit to Korea, Johansson celebrated Thursday with SK Biotek, AstraZeneca’s partner for treating 3 million diabetes patients in 98 countries since January 2018.

Under the agreement, worth $100 million per year and signed last year, SK Biotek, a 100 percent owned subsidiary of SK Holdings, has been contract manufacturing active pharmaceutical ingredients (API) for AstraZeneca’s blockbuster Type 2 diabetes treatment Farxiga at its factory in Ireland.

“We expect to strengthen our partnership through SK Pharmteco by expanding our API manufacturing for more diseases,” said SK Holdings CEO Jang Dong-hyun in a statement.