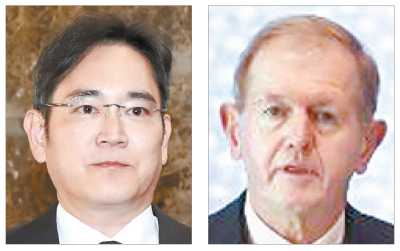 The meeting took place in a Seoul hotel on Wednesday, Samsung said. Wallenberg is visiting Korea this week as a member of the Swedish business delegation led by Prime Minister Stefan Lofven. Companies controlled by the Wallenberg family generates roughly one third of Sweden’s GDP. Its subsidiaries include Ericsson in telecommunications equipment, SEB for finance, Scania for commercial vehicles and AstraZeneca for pharmaceuticals.

The two corporate heads discussed future cooperation opportunities, Samsung said. Details on the discussion were not disclosed, but Wallenburg expressed his interests Wednesday in a speech given at a Korea-Sweden business summit held in central Seoul.

“The two countries should cooperate on developing new technologies for 5G, artificial intelligence and smart city,” he said.

Relations between Samsung and Wallenberg go back to 2003, when Samsung Chairman Lee Kun-hee met the Wallenberg family during a visit to Sweden. His son Lee Jae-yong was part of the team of top Samsung executives that accompanied him on the trip.

The visit spurred speculation that Chairman Lee sought to benchmark the Wallenbergs as a family conglomerate that successfully passed on the business to multiple generations and at the same time gained social respect. Marcus Wallenberg is the fifth leader of the family empire. Vice Chairman Lee and Wallenberg also met in 2012 when the Swedish businessman visited Korea.

Samsung Vice Chair Lee Jae-yong has been continuing meetings with head of states and corporate leaders despite an ongoing trial against him on bribery charges. Last month, Lee attended a meeting of Asean leaders hosted by President Moon Jae-in and also met with Vietnamese Prime Minister Nguyen Xuan Phuc. In July, he spoke with SoftBank founder Masayoshi Son.