Jo In-chang (played by Ha Jung-woo) is an EOD lieutenant on his way to be discharged when he is suddenly named the head of a secret mission, and now the Korean Peninsula’s entire fate is on his shoulders.

The mission is to get one of North Korea’s nuclear explosives to explode underneath Mount Paektu - which began to erupt after remaining dormant for decades - to ultimately have the nuclear explosion absorb the volcano’s explosion.

However, Jo must work with a double agent named Lee Jun-pyung (played by Lee Byung-hun) who remains skeptical of the plan and seems to have his own reasons for tagging along.

Meanwhile in Seoul, Minister of Civil Affairs Jeon Yoo-kyung and geology professor Robert Kang (played by Jeon Hye-jin and Ma Dong-seok) must guide Jo and Lee to the exact spot where the explosion will have the highest possibility to prevent the disaster. And they must do it while national interests and diplomatic clashes over North Korea’s nuclear weapon hangs in the air.

Although Woo-jung is always being sued for her plagiarism, she holds her head high and coolly says that her creations are art too.

The four people’s paths continue to cross while they each hide their true desires and goals. 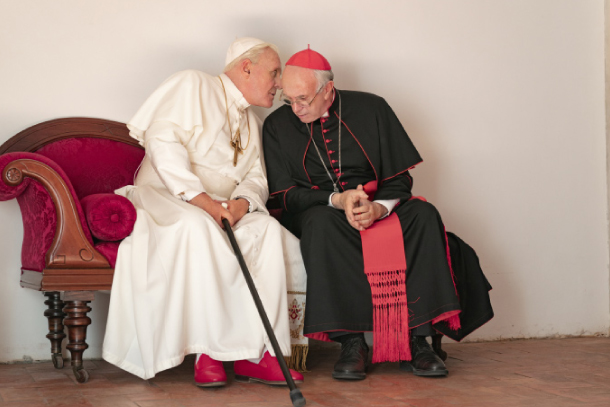 A biographical drama about a period of transition in the Roman Catholic church, in which Pope Benedict XVI resigns insisting that he cannot “take on the job” anymore due to his age and health, and a new pope is being selected.

By publicly announcing his resignation, Pope Benedict XVI becomes the first pope to resign since Pope Gregory XII in 1415, and first to do so on his own terms since Celestine V in 1294.

Cardinal Jorge, the future Pope Francis, is the most likely candidate to become the next pope, but he refuses, arguing that the resignation of Pope Benedict XVI cannot be accepted because it could damage the papacy forever.

However, the pope tells him that the church needs to change and he firmly believes that the cardinal is the right choice to lead the church in the right direction.

The two popes are convincingly portrayed by Anthony Hopkins and Jonathan Pryce. The film can be streamed on Netflix beginning Dec. 20.