Quality is not the problem for Korea’s AI, it’s quantity

Quality is not the problem for Korea’s AI, it’s quantity 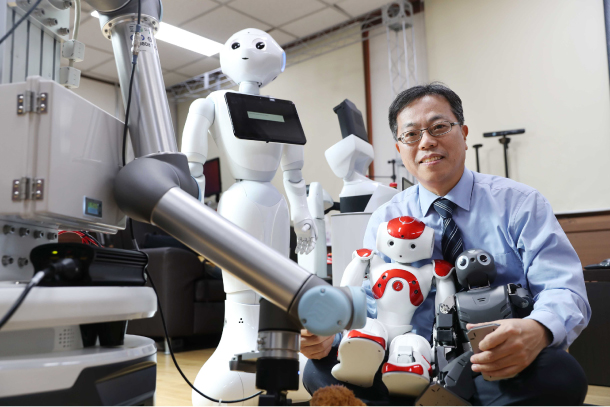 With the Moon administration’s announcement of its initiative to make artificial intelligence (AI) the country’s new growth engine, the government has been deploying funding and resources to transform the country into an “AI powerhouse.” Next year’s budget for AI has been set at 1.7 trillion won ($1.46 billion), a 50 percent increase compared to this year’s, and will focus on training next-generation AI researchers. Grassroots efforts are also underway, as the Seoul education office announced in November its plan to open 10 “AI-focused” occupational high schools by 2021.

But the actions that the government is currently taking seem to contradict their ambitious plans. The National Assembly supported by the Blue House is on the verge of killing the mobility service that incorporates AI technology by pushing for a legislation that would ban the ride service Tada, while the Education Ministry in 2018 scrapped classes on vectors and matrices in the high school curriculum for next year, which are essential in learning AI.

The three data bills that are to ease regulations on personal information as well as credit information have failed to be approved by the National Assembly. The question arises: Is Korea actually prepared for the dawning of the AI era?

Q. The Ministry of Science and ICT’s committee on new technology and services [of which you are part of] has agreed to lift AI-based mobility-service regulations requested by Hyundai Motor. But the National Assembly is trying to block Tada, which is already in service. It seems that the regulatory sandbox is meaningless.

A. The two are decisions that clash with each other, which I feel bad for. The government must come up with plans that would protect taxi drivers affected by the new mobility services while allowing companies to run their services so that the technologies could continue to be applied.

Companies need to try out their existing services in order to come up with new ones. If they are halted from the start, we will never know how far they can go. In an environment where the government nips start-ups in the bud, the regulatory sandbox can be a complementary measure.

The revised data protection law is pending in the National Assembly for the second time.

AI is based on big data. Companies need to move fast to collect more because the more data, the better. However, not only are local businesses struggling to create services or technologies using data, they are seeking out roundabout ways to avoid government regulations. For instance, China was able to use its stock of face image data to improve its face recognition technology, whilst in Korea, companies were not allowed to save face image data and develop their technologies. Even if Korean companies are allowed to utilize data, they are not allowed to use which already exists, meaning they will have to start collecting data from scratch. The technological gap is bound to worsen.

Some worry that Korea does not have enough talent in the AI industry.

The quality of the people is high, but we are short in numbers. There are just not enough researchers dedicated to basic sciences. This is a big problem since research in basic sciences is crucial to improve the machine learning process, which is at the core of AI. Unfortunately the country is used to seeing quick results and oftentimes is hesitant about making long-term investments in basic sciences, which is why Japan has a Nobel Prize winner, but we don’t. Japan had cultivated successful results through slow but steady investment. On the other hand, Korea has never had successful experiences like Japan and tends to give up midway out of frustration. The difference is even more evident when we compare ourselves to Canada. The Canadian government has been investing in Cifar, a Canadian organization aimed at nurturing AI strategy, since the 1980s. Those decades of continued investment is what created the huge difference we see today.

Then would more public investment be enough? Oh Se-jung, the dean of Seoul National University, points out the problem of researchers not being compensated enough.

International IT companies like Google and Facebook have already created a virtuous cycle of AI talents. They draw in scientists and researchers like a black hole and produce innovative technologies which draws in more likeminded talents. Since Korea was unable to create such virtuous cycle, what we can do is to pay more to recruit smart researchers.

I am still waiting to see how things will pan out, since President Moon pledged to increase the number of university majors in cutting-edge technologies, as well as allow professors to hold concurrent positions in companies. However, Korea still has a long way to go. American universities can increase students to match the demand of AI professionals, whereas in Korea, the total number of computer engineering students that Seoul National University can accept has been fixed at 55 for the past 15 years due to government regulations.

The Ministry of Education seems to be the main obstacle to AI development. There have been a lot of arguments over its recent decision to scrap classes on vectors and matrices from the high school math curriculum.

It’s hard to continue research in the liberal arts or social sciences if students fall behind in basic language skills. The same goes for science and engineering majors. Their basic vocabulary is math. How can researchers come up with discoveries if they don’t speak the language? However, the crux of the problem is not the curriculum changes itself but how our education system nurtures passive people. In this day and age, we don’t need teachers or schools to learn. In fact, anyone can find their own way to study the things they are interested in. In our country however, teachers lock students in the classroom and only teach them what they think is important. As a result, high-performing student in Korea are good at absorbing new information but do not have the ability to imagine their own wild ideas. We need talented individuals who are not afraid to mix different fields.

Seoul National University expanded its Big Data Institute early this month and opened the Artificial Intelligence Research Group. I am aware you will be the founding director of the research lab, so why did you decide to open this research lab?

Since the country is so short on AI professionals, unaccredited institutions churn out so-called AI professionals who have only gone through a couple months of training. This is a Band-Aid solution. If we continue to take such a superficial approach to AI, the technological gap will widen even more in the next decade. Investments should be made from the ground up. Seoul National University plans to include AI-related lectures in all undergraduate curricula starting as early as March next year.