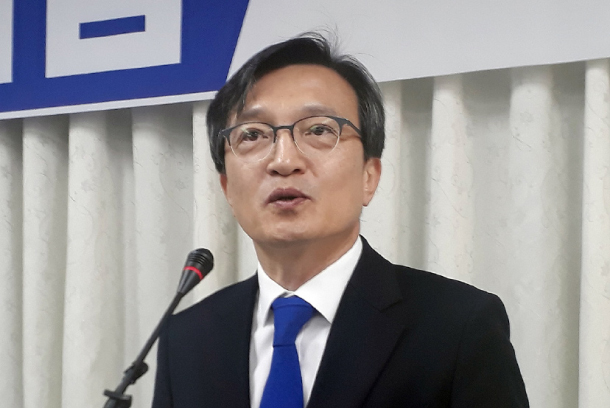 The ruling Democratic Party (DP) is facing a predicament as controversial political rookies are increasingly announcing their plans to run in next year’s general elections as the party’s candidates, despite a plan to reinvent its image.

Former presidential spokesman Kim Eui-kyeom, who resigned in March after an explosive backlash to reports that he dabbled in real estate speculation, possibly with inside information, declared his bid Thursday. In a press conference at the Gunsan City Hall of North Jeolla, Kim said he will run to become a lawmaker representing his hometown of Gunsan.

“I will give everything to complete the reform agendas of the Moon Jae-in administration and the victory of the DP,” Kim said.

The press conference came 18 days after his public promise to sell off the property in a redevelopment zone of Heukseok-dong in Dongjak District, southern Seoul, which prompted his resignation, and donate any profit he made from the deal to a charity. Shortly after the announcement on Dec. 1, Kim sold the controversial property for over 3 billion won ($2.6 million), earning about 800 million won in profit. The donation is yet to be made.

On the eve of his press conference to announce the election bid, Kim faced yet another scandal related to his family’s real estate speculation. A local media outlet reported Wednesday that Kim’s younger brother had also purchased a similar property inside the redevelopment district in the Heukseok-dong neighborhood, just one day before Kim’s purchase.

Kim posted a message on his Facebook to claim that it was not speculation, but a legitimate deal. “My younger brother’s wife had worked as a real estate agent in Heukseok-dong, so she knew the market in the area very well,” Kim wrote.

“When she met with her in-laws, she recommended buying properties in the neighborhood, and I and my youngest brother did so around the same time. I was not involved in my brother’s deal. He purchased the property at the recommendation of his sister-in-law.”

DP officials said Thursday that they did not welcome Kim’s announcement of his candidacy. “Kim did not coordinate with the party first before announcing his bid,” an official from the DP’s general election campaign team told the JoongAng Ilbo. “Because he is marred with real estate speculation scandals, we feel uncomfortable.”

The DP is also facing criticism about power succession after sons of political heavyweights increasingly declare their bids.

Moon Seok-gyun, son of National Assembly Speaker Moon Hee-sang, registered his candidacy with the party to run in the Uijeongbu A District of Gyeonggi, a longtime legislative district of his father. Rep. Moon has won five consecutive terms in the district.

After Moon Seok-gyun declared his bid and passed the DP’s primary screening on Wednesday, the opposition Liberty Korea Party criticized the practice as an attempt of hereditary power succession.

“If he insists on running, there is nothing we can do,” said a two-term lawmaker of the DP. “If I were Speaker Moon, I would not let my son do this.”

A son of the late President Kim Dae-jung is also preparing his bid. Kim Hong-gul, the youngest son of the late president, is reportedly demanding a nomination in a district in the capital region. During the 2016 legislative election, Kim had asked for a candidacy in Seoul’s Mapo B District, but the party did not grant his wish.

The DP had offered the ticket to run in the district to Sohn Hye-won, a close associate of President Moon Jae-in and his former campaign manager in 2017.

She, however, left the DP earlier this year as she was indicted over alleged real estate speculation. The independent lawmaker recently said she won’t seek reelection.

Noh Seung-il, a whistleblower of the abuse of power scandal involving former President Park Geun-hye and her associate Choi Soon-sil, also announced his bid on Tuesday to run in the Gwangsan B District of Gwangju. Noh said he will run as an independent candidate and win and then join the DP.

“Noh’s plan doesn’t really matter to the party,” a DP official told the JoongAng Ilbo. Min Hyung-bae, former presidential secretary for social policy, is currently planning his bid in the district as a DP candidate.

Although the DP launched its general election campaign planning team last month, it was unable to create a strategy for nominations due to the stalled revision of the election law.