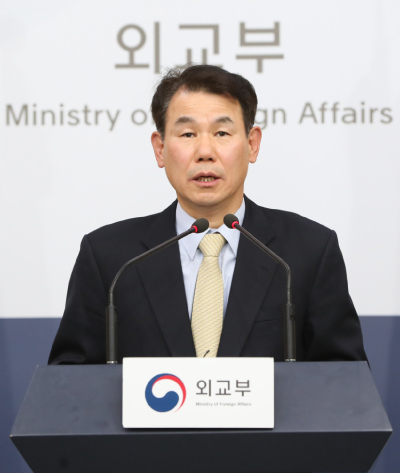 Jeong Eun-bo, Korea’s chief negotiator for the defense cost-sharing talks with the United States, stressed Thursday the importance of adhering to the current bilateral Special Measure Agreement (SMA) framework despite Washington’s push to expand its scope and get Seoul to contribute to U.S. forces’ operations outside of the country.

Jeong said in a press briefing at the Korean Foreign Ministry in central Seoul, “We strongly adhere to our stance that we must maintain the existing SMA framework, which has been in place for 28 years.”

The two countries have been locked in tense negotiations to renew the defense cost-sharing agreement for the upkeep of 28,500 U.S. troops in Korea as the current one-year deal is set to expire on Dec. 31.

Korea and the United States had been narrowing their scope of differences in their fifth round of talks in Seoul over Tuesday and Wednesday. Jeong and his U.S. counterpart James DeHart, the senior adviser for security negotiations and agreements in the U.S. Department of State’s Bureau of Political-Military Affairs, will resume their next round of talks for the 11th SMA in January in the United States.

“Fundamentally, the SMA is comprised of three categories,” said Jeong. “We have made clear in regard to readiness posture and such matters that we cannot accept the defense cost-sharing for U.S. troops stationed abroad.”

The current SMA covers the costs for Korean personnel working for the U.S. Forces Korea, construction and logistical support, but Washington has called on Seoul to pay beyond this, such as expenses for the rotational deployment of U.S. troops.

Seoul, Jeong said, maintains the position that there should be “fair and reasonable burden sharing within the framework of the SMA that ultimately contributes to strengthening the Korea-U.S. alliance and the combined defense posture.”

Jeong however agreed with DeHart that a multiyear agreement was desirable.

The previous evening, U.S. chief negotiator DeHart in an interview with the Korean press corps described that the total contribution currently being negotiated is lower than the $5 billion that has been named in media and that he hopes to reach a multiyear deal, adding, “We are not interested in extending for only one year. … It should be longer.”

Washington has reportedly demanded that Seoul pay a nearly fivefold increase in contributions, or nearly $5 billion, but DeHart confirmed “that is not a number we are currently focused on in the negotiations.”

But he said Seoul could pay more, noting, “It’s in part because of the forward presence that the United States has had for many decades that countries like Korea have succeeded democratically, economically and today are in a position, we think, to contribute more to the alliance.”

When asked about the exact figures being discussed, DeHart told reporters at the American Center Korea in Yongsan District, central Seoul, that there have been “long, very detailed discussions of the Korean contributions within the SMA and also of the contributions that are made outside of the SMA.”

DeHart noted the existing direct costs to pay for Korean personnel working for the U.S. Forces Korea, construction and logistics are “a relatively small part of what it costs in its entirety to defend Korea.”

He added that there also is a “larger set of costs that are not captured within the current SMA framework,” which includes rotations of U.S. military personnel to the Korean Peninsula and temporary deployments, as well as training and appropriate equipping of personnel and their transportation.

“This is all about maintaining an extremely high status of readiness for the readiness of the Republic of Korea [ROK],” he added.

DeHart said that Korea’s consideration to partake in the U.S.-led coalition to protect the Strait of Hormuz “has not been a topic of discussion in our talks at all.”

However, he acknowledged that Korea acquires “a significant level of American weapons systems” and said that “this is an important consideration for us in the burden-sharing context” but that it is just “one factor among many that we are considering.”

Washington has been pushing to add another category to the SMA in addition to the existing three categories.

DeHart said that the current agreement “does not capture the real cost …associated with the defense of Korea, so we proposed that the SMA framework be adjusted so that it really can capture the full range of costs.”

He said that it is “reasonable” to share some of the costs of some of the military operations that take place off the Korean Peninsula but still help defend Korea.

When asked if this includes the cost of transporting rotational troops and their equipment or any off-peninsula or offshore activities, DeHart replied, “We are asking that the ROK share in the cost, as opposed to taking on all the costs of any category and that all of the costs that we are talking about are those that are directly associated with defense of the ROK, not activities that are separate from that.”

But he said it is a “very appropriate discussion” to have with Seoul whether “they are willing to share in the large cost of transporting American service personnel on and off the peninsula” and to be equipped and trained to operate on the Korean Peninsula “because it is all about the defense of Korea.”

DeHart noted that it is not “unprecedented to make changes” to the SMA, “where language has been changed to reflect the evolving view of the two parties.”

But DeHart said that U.S. President Donald Trump’s remarks suggesting retaliatory trade actions on American allies that do not pay more for defense, or the withdrawal or reduction of U.S. troops from Korea, are not under consideration.

Seoul and Washington previously passed the deadline in the negotiations for the 10th SMA, which was signed in February this year, and under the current deal, Seoul agreed to pay 1.04 trillion won ($891 million).

DeHart said, “We are working very hard to try to conclude this agreement as quickly as we can; so we will be working very energetically in the New Year and January to try to get it done.”