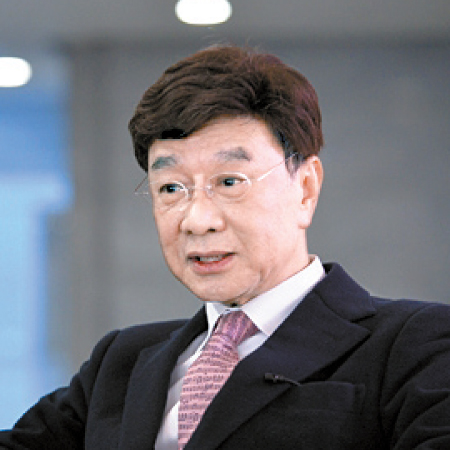 The Ministry of Education announced Thursday that it requested Dongyang University in Yeongju, North Gyeongsang, to fire its president for lying about his academic track record to the government, saying three out of five degrees he claimed to hold were fake.

The ministry made the announcement as part of its conclusion of a two-month probe that looked into alleged irregularities by Dongyang University President Choi Sung-hae. The investigation was launched after lawmakers of the ruling Democratic Party (DP) accused Choi of lying about his bachelor’s, master’s and doctoral degrees.

The DP’s attack was a reaction to Choi’s bombshell revelation in early September when he told local media that Chung Kyung-sim, an English professor at Dongyang who’s the wife of scandal-plagued former Justice Minister Cho Kuk, forged a Dongyang presidential award — without his knowledge — to help her daughter get into medical school.

The daughter submitted the award as part of her application to Pusan National University’s medical school, which she currently attends.
Choi’s statement played a critical role in the prosecution’s probe against ex-Justice Minister Cho and Professor Chung, and Chung was formally indicted days later.

Choi testified against Chung when Cho was still a minister nominee, but despite Chung’s indictment, Cho was appointed as the justice minister on Sept. 9. However, he resigned 35 days later as the accusations against him and his family continued to snowball.
Around the time of Cho’s resignation, the Education Ministry, pressured by DP lawmakers to dig into Choi, kicked off a probe scrutinizing his degrees.

The ministry said it had asked those universities for verification on Choi’s degrees and also used a system from the state-backed National Research Foundation that tracks foreign degrees.

In a telephone interview with the JoongAng Ilbo Thursday, Choi acknowledged lying about his degrees but denied it being intentional. Choi, who’s been the president of Dongyang since 1994, largely blamed his school faculty members for botching his records. Choi also mentioned he felt he was being falsely accused and that he would file a formal objection with the government to explain himself.

When Choi gave out awards to students at Dongyang, said the ministry, his title was also wrongly inscribed as “Dongyang University president, education Ph.D. Choi Sung-hae.”

The ministry also found out that Choi disobeyed the law in the process of becoming a board member and said it will ask the school foundation to kick him off of the board.