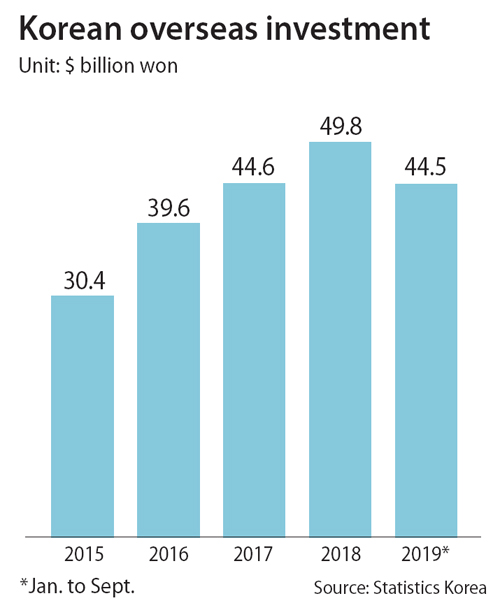 Investment is shrinking domestically, but Koreans’ investments abroad are seeing a sharp increase, particularly in finance.

According to the Finance Ministry on Friday, Koreans’ overseas investment in the first nine months grew 21.6 percent to $44.5 billion, including investments by individuals.

This is a record amount for the first three quarters of a year. At the current rate, overseas investments will almost undoubtedly exceed last year’s $49.8 billion.

The biggest decline was in wholesale and retail, which dropped 18.2 percent, to $1.44 billion.

The only area that saw a decline was the Middle East, which saw a 35.7 percent drop to $360 million.

By country, the United States remained the top destination for investment. Koreans in the first nine months of this year invested $10.3 billion, up 20.4 percent.

Even with three months left, Korean investment in the United States had almost reached the $10.8 billion made in 2018.

The country that saw the sharpest increase in investment was Singapore, which surged 111 percent to $2.5 billion. China trailed behind with a 55.7 percent increase to $4.8 billion.

Among the top five countries that Koreans invested in, Vietnam was the only one that saw a drop. Investment in Vietnam declined 7.2 percent year-on-year to $2.32 billion.

“Due to an increase in liquidity, investment in short-term financial products [overseas] and in major real estate for stable profits has increased,” said a Finance Ministry official.

The domestic market has been suffering from shrinking investment since the second quarter of 2018.

While the decline recently has eased, third-quarter investments of companies dropped 4 percent.

When releasing its top economic priorities for next year on Thursday, the government emphasized investment domestically.

“Our first priority in breaking through [the stagnant economic situation] is investment,” Finance Minister Hong Nam-ki said Thursday. “The recovery of investment will determine the depth of next year’s economic rebound.”

In the third quarter alone, overseas investment actually declined 5.8 percent compared to the same period a year ago, reaching $1.28 billion.

Overseas investment in manufacturing fell 32.5 percent year-on-year to $3.1 billion on worries over the U.S.-China trade dispute.

Investments in the United States declined 26.5 percent and China saw a sharper drop of 31.8 percent in the third quarter.

On the flip side, investments in finance rose 10.6 percent to $5.3 billion while investment in real estate surged 61.2 percent to $2.16 billion.