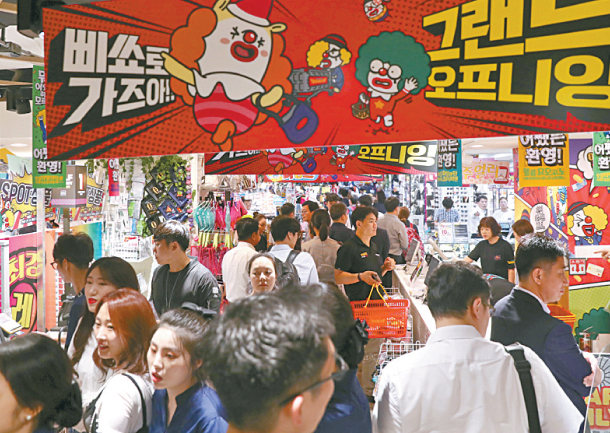 Emart is shutting down Pierrot Shopping, its unsuccessful take on Japan’s much-loved and quirky Don Quijote, and rethinking much of its brick-and-mortar strategy.

In the 2020 restructuring, which is seen as a direct result of customers flocking to e-commerce alternatives and away from physical shops, the retailer will also be refurbishing 30 percent of its discount shops nationwide.

“The restructuring plan is aimed to increase business efficiency by focusing assets on our strong points,” the company said in a statement.

Emart’s business has two main elements, its discount chain and the so-called specialized stores, which focus on a single product category or has a specific concept.

Specialized stores were aimed at attracting younger customers, which were not so interested in the company’s traditional cash-cow discount outlets. But some stores were unsuccessful and were a drag on performance.

“Specialized stores were generating around 90 billion won ($77.6 million) of operating loss a year, so we decided it’s time to reconsider profitability,” Emart said.

Pierrot Shopping is one of the specialized stores slated for closure. Rolled out in 2018, the brand was a virtual clone of Don Quijote, with a dizzying array of products, from cosmetics to foods, stacked floor to ceiling.

All seven branches will be shut.

Boots, a health and beauty retailer Emart imported from Britain, was restructured in July, when 18 stores were closed, leaving 15 today.

Electromart, a store specializing in electronics, smart devices and toys, will be expanding. Emart plans to open about 10 more next year. This year, it opened 13. The company says that Electromart has a loyal customer base and an established brand identity among consumers.

Emart itself will refurbish 30 percent of its existing 140 branches nationwide. The Emart branch in Wolgue-dong, northern Seoul, will be transformed to a mall-like grocery with stores inside the discount chain.

Emart’s general direction for the year will be back to basics: pricing and fresh food.

This year, Emart achieved good results with its low-price strategy of offering deep discounts on a number of items for a limited time. On Nov. 2, a major promotion was held and sales were up 71 percent on year.

Emart’s in-house No Brand brand has proved successful in Southeast Asia, and its products are now sold in 40 countries. Next year, eight No Brand stores are planned for overseas, adding to an existing two in the Philippines.