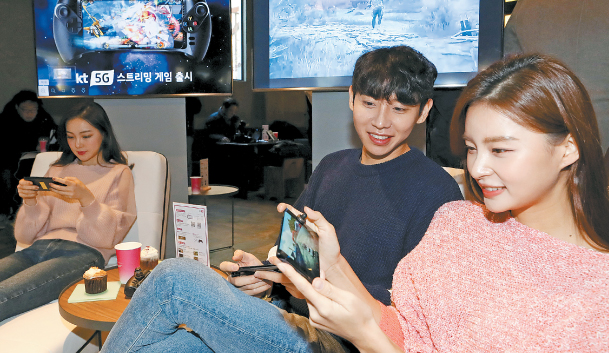 Models play KT’s “5G Game Service” in Seongsu-dong, eastern Seoul, on Friday. The game service, which allows users to stream games instead of downloading them, started a two-month test run on the same day. [KT]

KT is offering customers a service for playing data-heavy games via the cloud instead of downloading them onto personal devices.

Its “5G Streaming Game” is a subscription-based mobile app that grants users unlimited access to more than 50 games. Genres include role-playing, first-person shooter, racing, action, adventure and fighting games. Most of them being famous PC and console games that were too heavy to smoothly work on smartphones.

“We still haven’t inked it yet, so I can’t reveal details, but we’re already in talks with major game publishers to include big title games on our platform,” said Park Hyun-jin, KT’s senior vice president for 5G service department during a media event held in Seongsu-dong, eastern Seoul, on Friday.

In the long run, KT plans to include recommendations to suggest games according to personal taste.

The advantage of cloud gaming is that it doesn’t eat up storage. Similar attempts have been made in the past, but the infrastructure wasn’t there to support high-speed data transmission. According to IHS Markit, the cloud gaming market is estimated to jump sixfold from 2018 to 2023 and hit $2.5 billion.

“I believe the next big item for streaming services would be games - game streaming existed for console games, and there has been research in the field for two decades, but it never became mainstream due to lack of infrastructure,” Park added. “Low-latency 5G with stable bandwidth will open a new generation for cloud gaming.”

A two-month test run of the service started Friday. Before the official introduction in March, the service will be offered free of charge to the first 10,000 users that download the app.

KT is the latest among the Korea’s three mobile carriers to start a cloud gaming service that works on 5G network. LG U+ was first in September, when it started beta services of Nvidia’s cloud gaming platform, GeForce Now. SK Telecom partnered with Microsoft to allow a limited pool of users to stream Xbox games through Project xCloud in October.