How Gachon University got its tech groove

How Gachon University got its tech groove 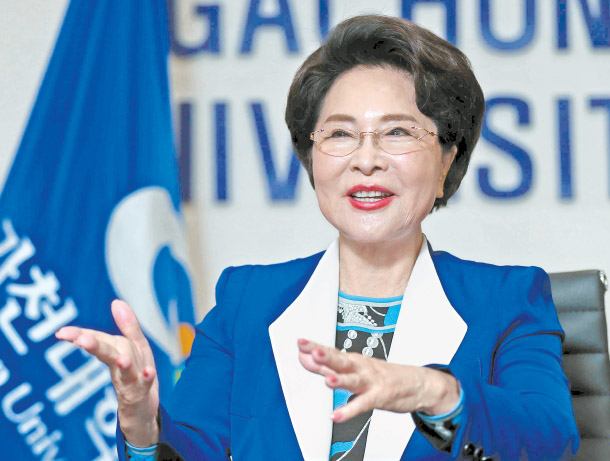 Lee Gil-ya, president of Gachon University, says that she plans to expand the school’s artificial intelligence education for students during a recent interview with the JoongAng Ilbo at the university’s main campus in Seongnam, Gyeonggi. [KIM SANG-SEON]

Gachon University is one of the fastest growing universities in Korea today, according to its president Lee Gil-ya.

Along with a merger between Kyungwon University and Gachon University of Medicine and Science in 2012, Gachon University improved their education conditions significantly and hired 500 more professors. As a result, it gained a competitive advantage on professors’ research over other four-year universities and saw an improved employment rate compared to previous years.

Gachon University has ranked 29th in the JoongAng Ilbo comprehensive university assessment rankings for 2019, up 10 from two years ago.
Lee, after spending her childhood hearing people say that “women don’t have to be educated,” always thought that she had to be “different from others” and applied herself to study.

Lee earned her bachelor’s degree in medicine from Seoul National University and opened an obstetrics and gynecology hospital in 1958 in Incheon.

“In the early 1970s, when doctors had no other instruments but treated patients only with their hands and ears, I bought an ultrasonic device at an exorbitant price,” Lee said. “A mother was so delighted to hear her baby’s heart beat at the time.”

In a recent interview with the JoongAng Ilbo, Lee said she will strengthen the university’s corporation with industries using its geographical advantage. The university is located near Teheran Valley, where Korea’s high-tech companies are clustered in Gangnam District, and Pangyo Techno Valley, a hub of art and innovative technology in Gyeonggi.
Below are edited excerpts of the interview.

Q. Is it true that Gachon University is the first in Korea to establish a department of artificial intelligence (AI)?

A. Yes. [It is a new department starting in 2020, and] we are in the process of selecting 50 freshmen. It had a high competition ratio of 18.2:1 for early admissions. Our professors and curriculums are ready. During the freshmen and sophomore year, students will be given some basic education on AI including mathematics and computer coding. When they become juniors and seniors, students must take intensive courses such as robotics, natural language process and data science. Gachon University aims to foster talented software engineers through cooperation with industries so that many students can have hands-on experience.

Many Korean universities have difficulties establishing a new department and inviting professors despite their interest in AI technology. Did Gachon University have the same difficulties?

Everything went smoothly for us as we prepared everything beforehand. Gachon University established its department of software in 2010. As one of the key factors of the fourth industrial revolution is AI, we have been making steady and persistent efforts to invite qualified professors. Gachon University currently has five professors who have specialized knowledge in AI technology and plan to hire five more who have considerable expertise in big data and Internet of Things. In order to establish a new department, a university must reduce their enrollment quota for other department. Many Korean universities might have some conflict during this process. However, Gachon University never had any resistance as our employees and students fully understand the need for change in the school system in order to be more responsive to the future.

Watson has been used to diagnose 1,191 cancer patients since it was first adopted in 2016. We use Watson for training students in the college of medicine as well. Also, our medical center has introduced an AI-based robot for orthopedic surgery, Navio, for the first time in Korea, and successfully conducted a knee replacement using the new technology. Gachon University and its medical center will lead AI technology in medical fields.

Will only students who major in the department of AI be able to receive education related to AI technology?

Starting this semester, we opened a new course called AI-Big Data as a general course. About 627 students from seven departments including business, medicine and nursing are currently taking the course. We will definitely expand its size so that more students can register. Also, we made software education mandatory for all students to graduate, four years ago. There are about eight courses and 80 lectures as general courses that students are required to take. The school only allows the top students who complete four to eight credits in each course to graduate.

Just teaching students AI technology doesn’t mean that they can be talented software engineers in the future.

I agree. Education on the fourth industrial revolution aims to develop humans’ capabilities in aspects that cannot be controlled by machines or AI. For this, creativity, critical thinking and ability to collaborate are very important factors. To enhance these factors, students should be given training on how to learn. Gachon University’s new students have to go to a two-day creative camp called ‘Ntree’ staring this year. During the camp, students are given some problematic social issues. They must come up with solutions through group discussions. There was time when I visited the camp; I felt very satisfied seeing them having discussions all night long.

Many people say that old-fashioned ways of university education should be changed. What do you think about this?

I agree. Gachon University has a new course system starting this semester. Among 16 weeks of courses, students will be given lectures for only 12 weeks. For the remaining four weeks, they will be given opportunities to complete a project or work experience utilizing the knowledge that they learned through lectures.

In order to bring a change in education, what is the most important factor for professors?

First of all, professors must love students more than anything. Parents usually say that their child is the apple of their eye. I don’t understand why professors cannot say that to their students. For professors, students are just the same as their children. If professors accept this by heart, they would have no other choice but to feel very passionate about teaching their students and conducting research.

If there’s anything you want to say about current difficulties that many Korean universities are facing, what would it be?

A rapid reduction in the number of students and tuition that has been frozen for over 10 years brought serious financial difficulty to universities. Also, Korea met high a unemployment rate due to a mismatch between the number of university graduates and demand from society. This is the crisis of the country and of universities as well. Instead of being passive on the fourth industrial revolution, universities must throw away old-fashioned ideas and go for change. The government should also help universities through deregulation and financial supports.