Lee Nak-yon will do whatever party asks

Lee Nak-yon will do whatever party asks 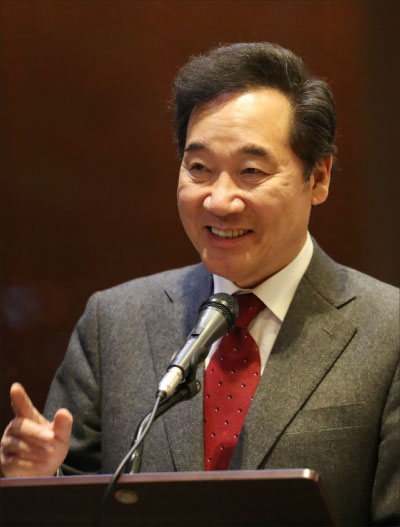 Outgoing Prime Minister Lee Nak-yon has said he will accept whatever the ruling party decides over his role in next year’s general elections.

Lee, a former four-term lawmaker, plans to return to politics after President Moon Jae-in named Chung Sye-kyun, a former parliamentary speaker, as his successor Tuesday. The nomination is subject to parliamentary approval.

There is growing speculation that Lee may run in a district for the April 15 parliamentary elections or assume the position of co-chief of an election preparation panel to help the ruling Democratic Party (DP) win the polls.

“Nothing has been decided over my role for the general elections. I think it is right to follow a decision by [the DP], rather than for me to request or propose it,” Lee told reporters Thursday in the prime minister’s residence of the administrative city of Sejong.

Lee said he will strive to become a politician who can meet people’s expectations and help upgrade the level of Korean politics.

“The place to which I will return is like a jungle, but I will do political activity [that can meet] people’s aspirations,” he noted.

As for the issue of Japan’s wartime forced labor, Lee voiced hope that the leaders of Korea and Japan may reach “some agreement” in mending strained bilateral ties during their upcoming summit set for next week.

President Moon and Japanese Prime Minister Shinzo Abe will hold their first one-on-one meeting in 15 months on Monday amid tensions over trade and history issues.

“It is hard to resolve everything, but I believe the two leaders may be able to reach some agreement,” Lee said.

Lee held talks with Abe in Tokyo in late October and agreed to kick off diplomatic efforts in earnest for an early resolution of their frayed ties.

“If there is some anticipation for my role, I will do whatever in improving relations between Korea and Japan,” he added.