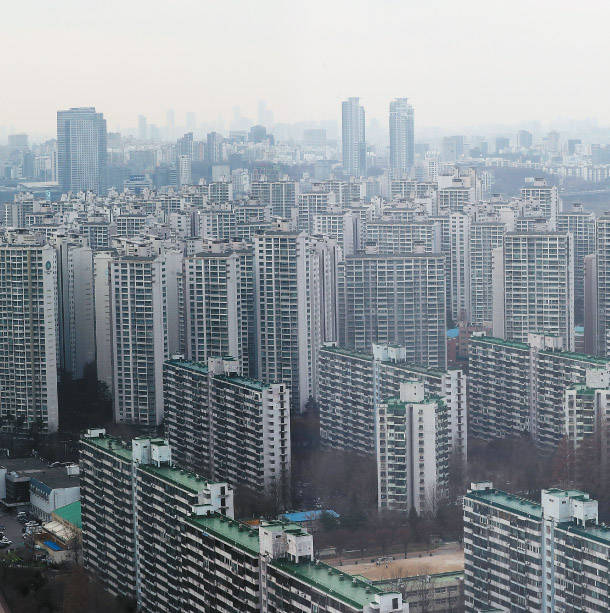 It’s been a week since the government surprised the country with its announcement of new real estate measures, and the controversy is showing few signs of simmering down as potential homebuyers and high-ranking government officials with multiple residences become increasingly frustrated and confused.

The backlash against the latest attempt by the Moon Jae-in government to curb rising housing prices is also affecting the ruling Democratic Party, which is worried about losing votes in next year’s general election.

A gift they didn’t ask for

Calls from potential homebuyers inquiring about loans and available apartments have flooded banks and real estate agencies after the government not only blocked fresh mortgage loans on apartments whose values exceed 1.5 billion won ($1.3 million), but also dramatically lowered the loan-to-value (LTV) ratio of apartments exceeding 900 million won from 40 percent to 20 percent in areas labeled as speculative or overheated, which includes the entirety of Seoul.

“We’ve been getting calls asking about loans as the ban on mortgage loans for apartments valued at 1.5 trillion won or higher went into effect immediately on Tuesday,” said a bank official. The LTV loan limit goes into effect today.

“Some people who have already signed a contract to buy such priced apartments and were planning on taking out loans to pay off the rest of their contract payments are panicking,” the bank official said.

According to KB Kookmin Bank, there are 213,000 apartment units whose market value exceeds 1.5 billion won. That’s 15.5 percent of all apartments in Seoul. 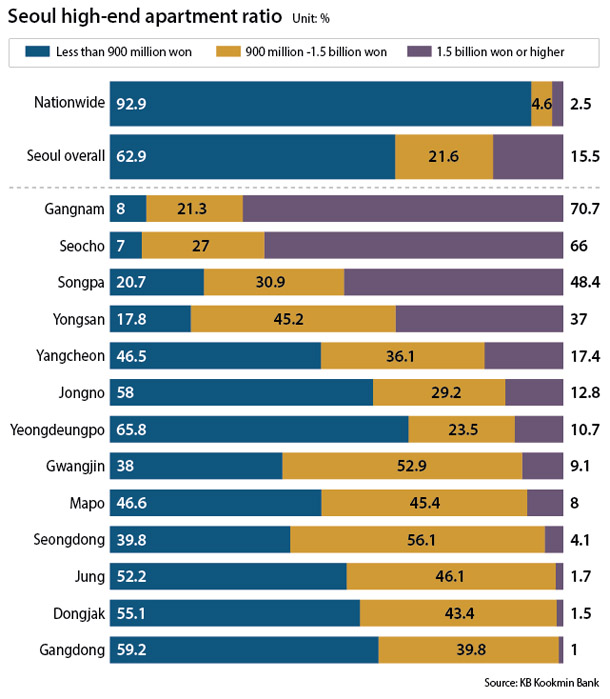 Those whose value is between 900 million won and 1.5 billion won account for 21.6 percent.

“The government is just telling everyone, ‘You can’t move into Seoul or to a larger apartment in Seoul unless you have that much cash,’” said a 40-year-old, who requested anonymity. “With my children growing up, we were planning to move from our current 84-square-meter [904-square-foot] apartment to an 114-square-meter apartment in the same neighborhood, but now that goal has become impossible.”

A career woman in her 30s, who currently lives just outside of Seoul, was planning to move back to the capital due to the long commute. But she said her dreams have been crushed.

“My husband and I both work, so we always have trouble tending to our daughter,” the woman, who asked not to be named, said. “We were planning on moving back to Seoul and buying our first apartment.”

She said that with the change of plans she might have to quit her job, despite enjoying what she does. ?

“This is a policy that only allows rich people full of cash to buy apartments in Seoul,” said an official at a major construction company that requested anonymity.

The construction company official said that while the government’s latest effort could put a stop to the so-called gap investment - where speculative investors buy up apartments with little investment, including mortgage loans, by using jeonse, or long-term deposits, as capital - the actual home buyers would be affected.

Experts agree that it will take some time before the effects of the recent measure surface. However, so far, no major changes have been spotted.

According to the real estate information provider Budongsan 114, Seoul apartment prices last week when the government measures were announced rose 0.23 percent compared to the previous week. Apartments in neighborhoods set to be redeveloped rose 0.31 percent.

“Since the government’s announcement, the market atmosphere has changed to sellers and buyers staying on the fence,” said Lim Byeong-cheol, a senior analyst at Budongsan 114. “However, real estate prices have continued to rise due to the shortage of apartments that are on sale.”

The analyst said more time is needed to see if the measures will affect apartment prices.

Not only homebuyers are expected to be affected by the government’s measure.

There is a growing concern that the tough measures will spill over to the rent prices, especially with the government announcing an increased tax burden on high-end apartments and those who own multiple residences.

“As [the government] made housing transactions itself [relatively] impossible, various tax burdens for owning an apartments have increased,” said Suh Jin-hyung, business management professor at Kyungin Women’s University. “As a result, these tax burdens could have the side effect of transferring that burden [to housing prices and jeonse],”

Jeonse, or long-term rent, prices in Seoul were up, especially in Gangnam.

The area south of the Han River, simply referred to as Gangnam, which includes districts like Seocho and Gangnam, is in high demand due to its concentration of elite schools and private institutions.

Another neighborhood in Seoul that is being affected is Gangseo District in western Seoul, whose jeonse prices rose by as little as 5 million won to as much as 20 million won.

On the way to a freeze?

Realtors are worried that the government’s recent measures could quickly freeze the market, which has recently been showing signs of recovery.

“We could face a sharp drop in any real estate transactions due to the latest measure,” said a realtor in Seoul, who requested anonymity. “While the housing market in rural areas has been struggling, Seoul was at least showing signs of recovery.”

The realtor said there would likely be an increase in the number of real estate agencies that would be closing shop.

The local construction industry is also expected to face a heavy blow from the recent announcement.

“While the construction market is struggling, the recent announcement added another negative factor,” said Lee Dong-joo, director at the Korea Housing Association. “We’re regretful that the government continues to roll out policies that regulate supplies when we’ve asked for increases.”

Construction companies’ orders in the first nine months of this year has fallen 2.8 percent compared to the previous year according to the Construction Association of Korea.

While other industries have expanded this year, the construction industry continued to decline.

A Bank of Korea report found that the construction industry, which declined 7 percent year-on-year in the first three months, retreated 3.6 percent in the second quarter and 2.7 percent in the third quarter.

The recent struggle was also evident in the hiring of foreigners, according to a recent Statistics Korea study.

In last week’s report, the total number of foreigners that were employed in Korea as of May this year amounted to 863,000. That’s a 2.4 percent drop compared to the same period a year ago, or 21,000 less. Out of that number, 76 percent, or 16,000, were people who worked in the construction industry.

Banks also likely to be affected.

Korea Investment & Securities estimated due to the measure, banks’ loan increase rate will slow roughly between 1 to 2 percentage points, faster than previous measures.

Profits generated from loans take up the largest portion of local banks’ profits.

According to the Financial Supervisory Service, interest profits account for 85.1 percent of banks’ total profit.

Especially with low interest rates, banks are already facing large amounts of pressure on their earnings.

The Korea Institute of Finance estimated that due to tighter regulations on loans and low interest rates, interest profits at banks next year are likely to shrink a maximum of 3.5 trillion won, with net profit rates dropping 0.1 percentage points to 1.45 percent.

Last week’s measure even came as a surprise to many public servants, as planning for the measure was conducted covertly. Not even many government officials or lawmakers in the ruling Democratic Party were aware of the measures that the government was cooking up.

“It was a low-key operation that seemed to have been communicated only among a small group of people even with related departments,” said a high-ranking government official, who requested anonymity. “Many of us were in the dark.”

Although Blue House Chief of Staff Noh Young-min’s comment that top officials needed to sell their additional apartments was targeted at Blue House employees, the burden has already spread to other public employees.

The number of Blue House top officials who are believed to own two or more apartments is believed to be 11, and they have been given roughly six months to sell off all of their properties except for one.

The Financial Services Commission (FSC) Chairman Eun Sung-soo was the first top government official to announce that he would be selling all of his apartments except for one in support of the government’s efforts.

“I called up the tenant around 5 p.m. personally,” Eun told reporters the day after the government announced its measures.

Eun has two apartments - one in Gangnam and another in Sejong.

The following day, Finance Minister Hong Nam-ki expressed his intention to sell off his other apartment. He has one home in Euiwang, Gyeonggi, and another in Sejong.

“The Blue House is leading by example in stabilizing the housing market,” Hong said on Wednesday. “High-ranking government officials shouldn’t pretend like nothing is happening [and should participate as well].”

“Some of us didn’t have a choice in owning two apartments,” a mid-level government official said. As is with the case of the FSC Chairman Eun and Finance Minister Hong, many government employees purchased apartments in Sejong when the government relocated some departments to areas outside of Seoul, including Sejong. Some government employees with older children live alone near their offices in the rural areas while their families, especially those with children who are in high school, remain in the greater Seoul area.

“The burden of being misunderstood as speculative investors has increased,” the government official said. “It seems that to be promoted to high-ranking positions, public servants will have no other choice but to only own a single apartment.”

The conservative party criticized the measures as policies that violate people’s right to private property.

“[The government real estate measure], which is a socialist solution that ignores market principles, will only worsen the problem,” said the head of the Liberty Korea Party Hwang Kyo-ahn. “If you have tried 18 times and it didn’t work, it means it won’t work.”

The ruling Democratic Party also raised concerns over the government’s recent real estate measures and the impact it would have on its general election next year.

In a meeting with Land Minister Kim Hyun-mee last week, Rep. Yoon Gwan-seok of the Democratic Party raised concerns over the public’s support.

Yoon asked the government to come up with measures that would supply apartments for homebuyers in their 30s and 40s as quickly as possible to ease the growing frustration of people in this age group whose chances of buying apartments in Seoul have been cut off.

“While the recent measure is a comprehensive package with the principle of cutting off speculative investors and protecting actual buyers [who plan on living in the apartments that they buy] the government needed to have structured the measure to include housing supply plans that makes it possible for those homebuyers to purchase an apartment in Seoul.” Yoon said.

“Whether people who own multiple apartments will put up the extra apartments for sale or not in the first half [of 2020] will determine whether the policy was a success or not,” Yoon said. “We hope that the government will also come up with housing measures for potential [home] buyers.”

Some of ruling party lawmakers have added that the recent measure was too one-sided.

“The recent policy, while it could curb the rising housing prices, is an overarching regulation and is not a policy that could be used for an extensive period,” said Lee Hyun-seok, Konkuk University professor of real estate studies. “It’s because excessive intervention in the market could lead to side effects by distorting the market.”