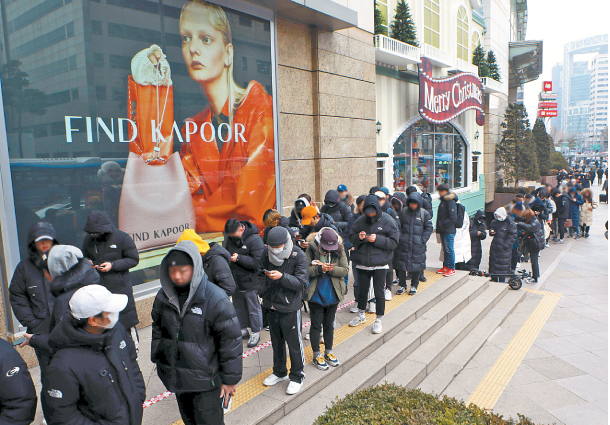 Kim Han-joon, a 31-year-old office worker, purchased a pair of Nike Air Force 1 Par-Noise for 219,000 won ($190) last month. The sneakers were developed in collaboration with G-Dragon of Big Bang, who was recently discharged from mandatory military service. Only 10,000 pairs were manufactured globally, which raised interest in the shoes both inside and outside of Korea.

“The competition to purchase these sneakers is super high,” said Kim. “People say you had to have saved a country in a previous life to get your hands on them.”

Kim said he had to wait more than 12 hours at a shop in Hongdae, western Seoul, to buy them. 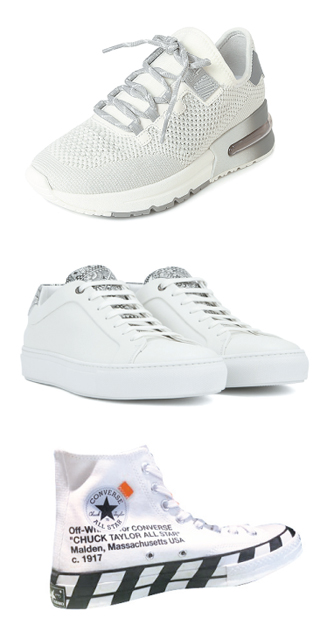 From top to bottom are limited editions of Krush Bis from Ash, the trainer edition of Boss x Meissen and Off-White x Nike Chuck Taylor 70s.

Young people didn’t hesitate to wait in line a day ahead of the scheduled start of sales. They called the experience of waiting in line “camping.”

The shoes were sold out in three hours.

They went initially for about 100,000 won, but they are now being resold at three times that price online.

A growing number of people have turned to fashion as an investment strategy.

According to Thredup, a U.S.-based online thrift store, the resell market worldwide will grow to 48 trillion won next year from 28 trillion won last year. Reselling has grown from simply exchanging products and money to a kind of collectable business.

The collectable sector has now expanded to sneakers.

Brands like Off-White, Nike, and its Air Jordan sub brand, as well as the Adidas Yeezy Boost series are particularly well-received in Korea. Nike shoes made in cooperation with contemporary artist Tom Sachs hit the market in the 100,000 won range. They now go for 4.5 million won.

To capture the demand, retailers are striving to offer limited editions. At the Lotte Premium Mall, the Korean limited edition of Krush Bis from Ash and the trainer edition of Boss x Meissen are being sold this month.