Trump and Xi talk Pyongyang over the phone

Trump and Xi talk Pyongyang over the phone 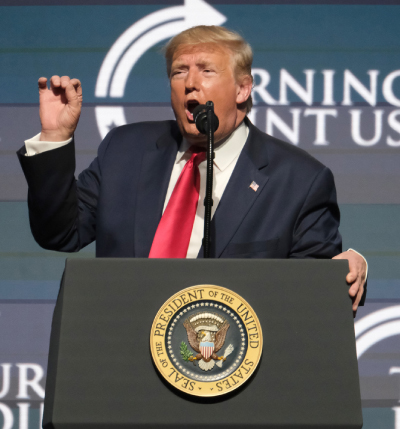 U.S. President Donald Trump and Chinese President Xi Jinping discussed North Korea over the phone Friday, days ahead of an upcoming trilateral summit between the leaders of Seoul, Tokyo and Beijing and as Pyongyang forecasted a “Christmas gift” for the United States.

The phone call came upon the request of Trump, and the two leaders discussed, among other issues, the U.S.-China trade deal and North Korea situation, amid Beijing’s push for some sanctions relief for Pyongyang.

Trump tweeted Friday he had “a very good talk with President Xi of China concerning our giant Trade Deal” and added “Also talked about North Korea, where we are working with China, & Hong Kong (progress!).”

China’s state-run Xinhua News Agency reported that Xi “stressed that it is imperative to stick to the general direction of a political settlement, saying all parties should meet each other halfway,” apparently urging compromise on each side. Xi also called to “maintain dialogue and momentum for the mitigation of the situation, which is in the common interests of all.”

Last week, China and Russia submitted a draft resolution to the United Nations Security Council to provide North Korea partial sanctions relief such as easing a ban on North Korea’s exports of textiles and seafood and exempting inter-Korean rail and road cooperation projects from UN sanctions.

This has led to speculation that China, a veto-wielding permanent member of the Security Council along with Russia and the United States, is looking to play a more assertive role on the North Korea issue amid the standstill in denuclearization talks between Washington and Pyongyang.

The draft resolution notably calls for the “prompt resumption” of six-party talks among China, Japan, Russia, the United States and the two Koreas, which have been defunct since late 2008, or the launching of a multilateral consultation platform.

Pyongyang has remained mum on Washington’s offers to resume working-level dialogue and has called on the United States to come up with a different approach to the negotiations before the end of the year, threatening further provocations which could include a long-range ballistic missile test.

The U.S. State Department has maintained that it is premature to consider lifting any sanctions at the moment.

Trump, who was impeached by the U.S. House of Representatives last Wednesday on charges of abuse of power and obstruction of Congress, has hailed the halted nuclear and intercontinental ballistic missile testing by Pyongyang since late 2017 as a key result of his administration’s diplomacy with North Korea.

U.S. Defense Minister Mark Esper said in a press conference at the Pentagon Friday, “Clearly, we think that the political solution is the best solution to denuclearization of the peninsula and to address North Korea’s programs.”

Gen. Mark Milley, the chairman of the U.S. Joint Chiefs of Staff, alongside Esper, stressed U.S. security cooperation with South Korea and Japan and said, “So the tripartite alliance, if you will, between the U.S. and the ROK [Republic of Korea] is rock-solid, and I think it’s prepared to defend the interest of the U.S., Japan and South Korea at a moment’s notice.” Beijing has had concerns about Seoul signing onto a U.S.-led trilateral security alliance.

Stephen Biegun, the U.S. special representative for North Korea, returned from Beijing, the last leg of his three-country Asia trip which did not bring him closer to resuming dialogue with Pyongyang officials. Biegun was sworn in as deputy secretary of state on Saturday, immediately after returning from his weeklong trip which also took him to Seoul and Tokyo.

Biegun indicated to reporters Saturday upon arriving at Dulles International Airport in Washington from Beijing that he continues to remain open to diplomacy with North Korea.

He referred to his speech made in South Korea and said “those remarks stand,” in response to reporters’ questions whether he made contact with North Korean officials while in China.

While in Seoul, Biegun in a press conference on Dec. 16 reiterated that there is no “deadline” for the United States and said in a direct message to his North Korea counterparts: “Let’s get this done. We are here, and you know how to reach us.”

Biegun is expected to continue to helm denuclearization negotiations with the North, but his elevated position as the U.S. State Department’s No. 2 position could provide him more leverage in negotiations and also makes him a suitable counterpart for North Korean Vice Foreign Minister Choe Son-hui. Should U.S. Secretary of State Mike Pompeo decide to step down from his post to run for Senate next year in Kansas, Biegun could potentially take over leading the department as acting secretary of state.

President Moon Jae-in is expected to discuss the North Korea situation with Japan’s Prime Minister Abe and Chinese Premier Li Keqiang during their trilateral summit in Chengdu, China, to prevent Pyongyang’s further provocations and also encourage an early return to negotiations between the North and the United States.