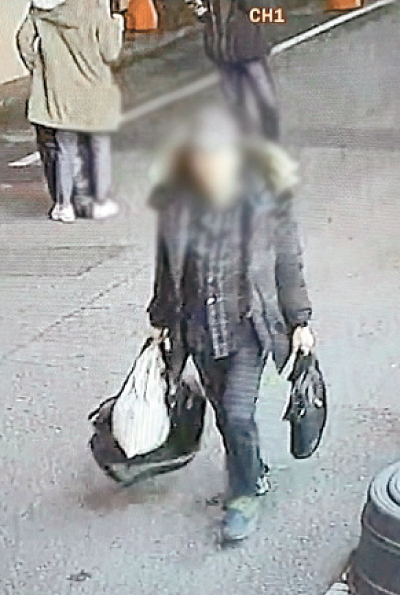 CCTV shows the suspect, a 39-year-old man identified only by his surname Kim, heading to the motel on Saturday. The police said that the suspect started the fire on Sunday morning by setting a pillow alight and then used toilet paper to spread the flames. [NEWS1]

A fire at a motel in Gwangju on Sunday claimed two lives and caused 31 injuries, though police say they have apprehended the alleged arsonist that started the blaze.

According to fire authorities, the blaze started on the third floor of the building at around 5:45 a.m. but quickly spread to reach the fourth and fifth floors.

A total of 53 people - 49 guests and four staff - were occupying the building, but 20 managed to escape once the fire started, with at least one person jumping out of a window from the fourth floor to reach safety.

While a large squad of around 200 firefighters and 48 vehicles put out the blaze in just over 20 minutes and rescued those remaining inside, two victims eventually died from asphyxiation and burns.

Eight others were severely injured, with one of them in critical condition at the hospital, while the remainder suffered less serious injuries, police said.

After tracing the origins of the fire to room 308 at the motel, police arrested its occupant.

The suspect, a 39-year-old man identified only by his surname Kim, admitted to police that he started the fire by setting a pillow alight and then used toilet paper to spread the fire around the bed, after which he covered the fire in a blanket and left the room.

Kim told police he returned to the room to gather his belongings but became frightened after he saw the size of the fire. He then fell unconscious after inhaling fumes from the blaze. Firefighters rescued him along with the other victims, and police later arrested him at the hospital he is being treated at after confirming his identity.

While the motive for the alleged arson remains entirely unclear, police say Kim claimed he felt desperate and cited various contradictory reasons for his actions. Police say they are looking into the suspect’s background to see whether he has a history of mental illness.

The fact that the fire happened on the Sunday before the Christmas holiday may have raised the casualty rate, since the motel was nearly full at the time of the fire. Witnesses at the scene described people flooding out of the burning building with their faces covered in soot, with many of them not even properly clothed due to how quickly the fire spread.

While an automatic fire detection device triggered an alarm that alerted guests of the emergency, no sprinkler system had been installed in the building. According to the fire department, the motel had no sprinklers because its building license was issued before 1996, when it was not mandatory to install such safety system.