Go icon Lee bows out to HanDol in final match

Go icon Lee bows out to HanDol in final match 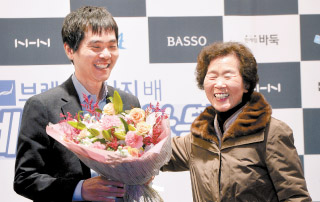 Go player Lee Se-dol, left, receives a bouquet of flowers from his mother after his retirement match against the AI program HanDol at El Dorado Resort in Sinan on Saturday. [YONHAP]

HanDol, developed by Korea’s NHN Entertainment, took down the 36-year-old master after 181 stones in Lee’s final match, held in his hometown of Sinan, South Jeolla.

Lee, who turned pro at 12 and went on to capture 18 international and 32 domestic titles, defeated HanDol in the opener of the three-match series on Wednesday in Seoul. He started that match with a two-stone advantage. The second match on Thursday was played without any handicap, and HanDol was victorious then.

With his family watching, Lee was again handed a two-stone advantage at the start of Saturday’s match. Lee Hwa-seop, an amateur Go player who handles operations of NHN’s online Go game, placed the stones for HanDol on the board.

After his swan song, Lee lamented some of his moves in the early and middle stages of the match.

“I should have done better early, and then the match would have played out much like the first one,” Lee said. “To be honest, I don’t think HanDol is particularly strong when playing with an advantage. I think some of the younger players would have beaten HanDol.”

HanDol took down five of the country’s best Go players in January. Lee beat AlphaGo, developed by Google’s DeepMind, once in their five-match series in 2016, and remains the only human Go player to have defeated AlphaGo.

Lee announced his retirement from Go, or baduk in Korean, in November, saying he felt helpless against AI programs and didn’t think he could beat them.

Looking back on his career, Lee said, “I’ve enjoyed this ride.”

“In the past, I used to say, ‘Baduk is my life,’” he said. “But now, I think there’s more to my life than baduk. I take away a lot of fun memories. Even though I lost today, I was happy to have played a good match.”

He said it was “meaningful” for him to play the final match in his hometown, adding that it would have been difficult to have his family on hand in Seoul, which is about five to six hours away from Sinan.

Lee said he doesn’t yet have specific plans for his post-playing days. For now, he just wants to be remembered for the good things he’s done.

“I can’t begin to describe the gratitude I have for my fans,” Lee said. “If I had done something wrong in the past, I hope people will see that as a youthful indiscretion on my part. I’d appreciate it if they will remember me for positive things.”