No news hasn’t been good news for Korean slugger Kim Jae-hwan, who was made available to 30 major league clubs via posting on Dec. 5, but has generated virtually no buzz since. 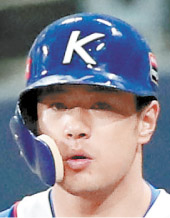 But this could well change, a source privy to the situation told Yonhap News Agency on Saturday.

Under the posting rules, the 30-day negotiating period for any interested Major League Baseball (MLB) club will end at 5 p.m. Eastern Time on Jan. 5.

If he can’t reach a deal by then, Kim, the 2018 MVP in the Korea Baseball Organization (KBO) for the Doosan Bears, won’t be eligible to be posted again until November 2020.

One other KBO player who was posted on Dec. 5, left-handed pitcher Kim Kwang-hyun, has signed a two-year deal with the St. Louis Cardinals. But Kim Jae-hwan, a 31-year-old outfielder/designated hitter, has been a forgotten man in the MLB rumor mill, with no speculation about his potential landing spots available.

But the source predicted the market will start developing for Kim in coming weeks.

“In the first couple of weeks in December, it was time for bigger names to get off the board,” the source said on condition of anonymity. “I think things will start moving along for Jae-hwan next week.”

He was also rushed into the open market. Kim wasn’t even in line to be eligible for posting this year. KBO players must complete seven full seasons or their equivalent - one full season equates to 145 days spent on the active roster - to be posted, and Kim, who made his debut in 2008 but only became a full-time player in 2016, had fallen 47 days shy of his seventh full season at the end of 2019.

Kim received 60 bonus days of service time after helping Korea finish runners-up and qualify for the 2020 Olympics at the World Baseball Softball Confederation Premier12 tournament last month. And as soon as he gained his posting eligibility, Kim sat down with the Bears to ask them to post him.

The Bears agreed to post him with only about 24 hours to spare before the Dec. 5 deadline.

Several major league scouts acknowledged they were caught off guard by Kim’s posting. The source said two major league teams have approached Kim’s U.S. agency, Creative Artists Agency Sports, for additional information on Kim recently, though it wasn’t clear if those teams were simply doing their due diligence or were showing real interest in the player.

When Kim was posted, he drew some comparisons to a posted Japanese player, Yoshitomo Tsutsugo. Both profile as power-hitting corner outfielders with on-base skills but limited defensive upside. Tsutsugo is three years younger than Kim.

And Tsutsugo has signed a two-year, $12 million deal with the Tampa Bay Rays. And the source said, with the Japanese star off the market, teams who might have been scared off by the price tag - Tsutsugo received larger offers from other clubs before joining the Rays - can now shift their focus to Kim.