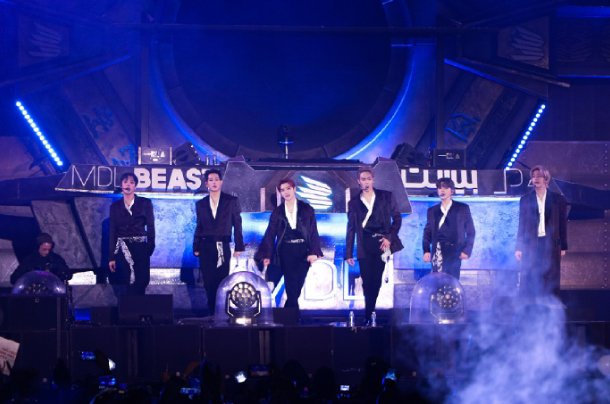 Boy band Monsta X lit up the night at their very first performance in Saudi Arabia during the MDL Beast Festival on Saturday.

The MDL Beast Festival, held from Dec. 19 to 21 in Riyadh, Saudi Arabia, is the region’s biggest music festival of the year.

Monsta X was the festival’s only Korean act. The group opened its set with “Follow,” and went on to fill the hour with its biggest hits such as “Middle of the Night,” “Someone’s Someone” and “Who Do U Love?”

The band also appeared for a surprise collaboration with Steve Aoki for “Play It Cool,” a track that came out in February. The two acts had performed together for the first time in September at the iHeartRadio Music Festival in Las Vegas.

It closed its performance with “Rodeo,” performing a total of 13 songs.

“It was the first time for us to perform in Saudi Arabia,” said member I.M. “We were both excited and worried, and so many Monbebe [fan club members] showed up. We were so happy to see the audience enjoying our stage.”

“Thank you to all of the Monbebe and the audience. We hope to see you again during our Monsta X world tour,” he said.