Arrest for Cho Kuk is requested

Arrest for Cho Kuk is requested 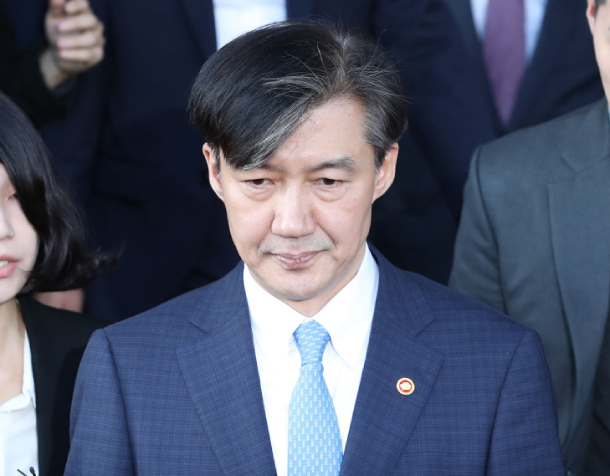 State prosecutors on Monday requested an arrest warrant for former Justice Minister Cho Kuk on allegations that he covered up bribery accusations against an ex-Busan vice mayor while working in the Blue House.

According to the Seoul Eastern District Prosecutors’ Office, the arrest warrant for Cho was sought on grounds of suspicions that he abused his power as presidential senior secretary for civil affairs to curtail a Blue House probe of Yoo Jae-soo, Busan’s former mayor for economic affairs.

Cho’s warrant hearing has been scheduled for Thursday morning and will be presided over by the same judge from the Seoul Eastern District Court who put Yoo under arrest on Dec. 13 for allegedly taking around 49.5 million won ($42,500) in bribes.

This will be the first time prosecutors have directly sought Cho’s detention after successfully detaining his wife, Chung Kyung-sim, in a separate investigation of alleged irregularities in their daughter’s academic career and private equity investments.

Cho, who resigned after a short and scandal-plagued tenure as Justice Minister in October, was questioned twice last week in the Yoo probe by prosecutors, who subsequently obtained Prosecutor General Yoon Seok-youl’s approval to seek his arrest.

To prove Cho deliberately misused his power, prosecutors must determine how much he knew about corruption allegations against Yoo before allowing him, then a high-level official at the Financial Services Commission (FSC), to submit his resignation to the FSC.

Prosecutors argue Cho’s actions represented a usurpation of the authority of the Blue House anticorruption office, whose secretary, Park Hyoung-chul, claimed Cho made the decision on his own.

According to prosecutors, Cho told them during questioning that he would accept “ultimate political responsibility” for Yoo’s resignation. But analysts say this can be interpreted to mean he does not accept criminal responsibility.

The Blue House on Monday released a written statement appearing to criticize the prosecution’s warrant request, saying it was up to the court to “rule on whether it was justified and fair to seek” Cho’s arrest.

“At the time, the office of the secretary for civil affairs had no authority to investigate, so Yoo Jae-soo himself had to agree to a probe. But Yoo refused, so the relevant information about his corruption allegation was relayed to the appropriate institution,” the statement read.

“It was the civil affairs secretary’s authority to make a judgement on whether to seek a prosecutorial probe or inform the [FSC], and we say once again that the Blue House is not an institution that makes these political decisions based on the prosecution’s permission.”

Both the prosecution’s attempt to detain Cho - the legal grounds for which have been questioned by many analysts - and the Blue House response testify to just how politically sensitive Cho’s fate has become in the context of the Moon Jae-in administration’s attempt to curb the powers of state prosecutors.

The disproportionately large scale of the prosecutorial probe into Cho’s wife - who was unprecedentedly indicted twice for a single allegation by prosecutors this month - and now with a pair of major investigations of the Blue House’s involvement in the Yoo scandal and alleged meddling in the Ulsan mayoral election last year, prosecutors have been taking aim directly at the administration in ways that seem to reflect a political motive, analysts say.

With a fast-tracked prosecutorial reform bill pending at the National Assembly, prosecutors may be aiming to demonstrate that no elected or appointed official can be allowed to challenge the agency’s control over law enforcement in Korea.