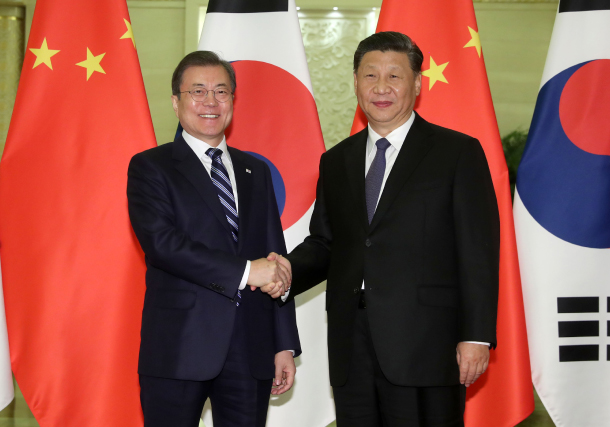 Korean President Moon Jae-in, left, shakes hands with China’s President Xi Jinping, right, before a summit in the Great Hall of the People in Beijing on Monday. [JOINT PRESS CORPS]

The leaders of South Korea and China discussed efforts to maintain diplomacy to denuclearize North Korea during a summit in Beijing Monday, on the eve of Pyongyang’s threat to give Washington an unwelcome “Christmas gift.”

In opening remarks for the meeting, Moon expressed concerns about the stalled dialogue between Washington and Pyongyang and escalated tensions on the Korean Peninsula.

“I highly appreciate that China has played a crucial role in denuclearization and the establishment of peace on the Korean Peninsula,” Moon said. “The recent situation, where the North-U.S. dialogue was suspended and tensions on the peninsula are escalating, is not beneficial for our two countries or North Korea. I hope we will cooperate more closely so that this rare opportunity will produce an outcome.”

Seoul sees Beijing as instrumental to reviving the stalled diplomacy. Expectations were high that Moon would ask Xi to play a role to revive stalled talks between North Korea and the United States ahead of North Korean leader Kim Jong-un’s year-end deadline for the Donald Trump administration to change its strategy. Kim and Trump have met three times including their historic first meeting in Singapore in June 2018, but no substantial progress was made in the denuclearization negotiations.

Over recent weeks, Pyongyang staged a series of provocations and intensified its rhetoric. Earlier this month, the North threatened an ominous “Christmas gift” for Washington unless it gives up its “hostile policy,” fueling speculation that it may resume nuclear or intercontinental ballistic missile testing.

In his opening remarks, Xi made a roundabout mention on the North Korea issues. “We have consensus that we should work to advance bilateral relations and that we should stimulate peace, security and prosperity of the region and protect multilateralism and the free trade order,” Xi told Moon according to the Blue House’s pool report. Efforts to promote regional peace, security and prosperity appeared to relate to North Korea issues, while multilateralism and the free trade order appeared to relate to the United States.

Xi said China and South Korea share the same interests in Korean Peninsula issues. “Both countries support peace and stability of the Korean Peninsula and demand to resolve the problems through dialogue and negotiations,” Xi was quoted as saying by CCTV. “This is a clear ability to maintain stability and stimulate dialogue.”

In their opening remarks, both Moon and Xi expressed hopes for improving bilateral ties. Beijing punished Seoul economically after it allowed the installation of a U.S.-led Terminal High Altitude Area Defense (Thaad) antimissile system in 2016, and Moon made an appeal that bilateral relations be restored.

“The two countries might have felt disappointed at each other temporarily, but we share a long history and culture, and we can never drift apart from each other,” Moon said.

Moon noted that bilateral relations have improved this year, and he hopes for better. “Because exchanges between Korea and China were revived, bilateral trade was over $200 billion, and over 8 million people are traveling between the two countries like neighbors,” he said.

“China’s dream has become an opportunity for Korea, and I hope Korea’s dream will be helpful to China too,” Moon said.

He said Seoul and Beijing recently adopted a joint study that illustrated specific cooperation measures based on his earlier agreement with Xi to work together to link China’s “One Belt, One Road” initiative and Korea’s New Southern and Norther policies.

“I hope various cooperation projects will be implemented as soon as possible for the two countries to jointly enter markets in third countries and see synergy,” Moon said.

Moon also extended an invitation to Xi to visit Korea. “I hope to see you again in Seoul at the nearest date next year,” Moon said.

Calling Korea a “friend and partner of close cooperation,” Xi expressed his hope for better ties.

“We should reinforce and advance our strategic cooperative partnership in the face of global turmoil never seen in the century and protect and expand mutual interests of the two countries,” Xi was quoted as saying in the Blue House pool report. “With President [Moon], I will play a role to lead the way for the bilateral relations to reach a new and higher level.”

According to the CCTV report, Xi said bilateral exchanges in education, sports, media, youth and at a regional level should be expanded to improve mutual understanding and friendship of the two countries’ peoples. Conspicuously missing, however, was a plan to restore economic and cultural exchanges. One of China’s retaliations for the Thaad deployment was a ban on K-pop imports, and that sanction, although eased a little over the past years, remains intact. Moon expressed his hope that bilateral cooperation will expand in the areas of economics, trade, cultural and sports exchanges and environmental protection, CCTV said.

Another politically sensitive topic was also mentioned at the summit. According to CCTV, Moon, a former human rights lawyer, told Xi that Korea views the situations in Hong Kong and Xinjiang as part of China’s internal affairs.

The remarks came amid some conflict between the United States and China over the issues. The U.S. Congress recently approved a bill criticizing Beijing’s mass crackdown on ethnic Muslims in Xinjiang, following U.S. President Donald Trump’s signing of a human rights legislation on Hong Kong.

“Protectionism, unilateralism and hegemony have flown backward to disrupt global governance and threaten global peace and stability,” Xi said, according to CCTV, apparently attacking the United States. “China, as a responsible superpower, adheres close to the principle of reciprocity and equality with each country and puts efforts to create a community.”

At the summit, Moon responded that Korea understands China’s stance on key issues and supports free trade. “We want to strengthen communication and cooperation with China on regional and international issues,” Moon told Xi.

The summit, originally scheduled for 30 minutes, went on for 55 minutes. Following the talks at the Great Hall of the People in Beijing, the two leaders had a working luncheon with their key aides.

It was Moon’s sixth summit with Xi. Their last meeting took place six months ago in Osaka, Japan, on the sidelines of a Group of 20 summit. The two-day visit is Moon’s second presidential trip to China. He had a state visit to the country in December 2017, within months of his inauguration.

Following the talks and a working luncheon, Moon headed to Chengdu, the capital city of southwestern Sichuan Province, for a bilateral meeting with Chinese Premier Li Keqiang later in the day.

Today, Moon will attend a trilateral meeting with Li and Japanese Prime Minister Shinzo Abe and a bilateral summit with the Japanese leader.