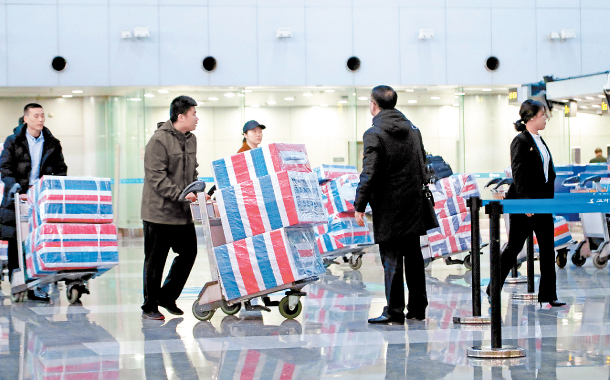 People suspected to be North Korean overseas workers are spotted at China’s Beijing Capital International Airport Saturday, a day ahead of the deadline for their repatriation in accordance to a 2017 UN Security Council sanctions resolution. [YONHAP]

While masses of North Korean overseas workers have been spotted flocking back home ahead of the Sunday deadline for their repatriation in accordance to a 2017 United Nations Security Council resolution, others are remaining abroad thanks to loopholes in the sanctions.

A South Korean government official said Sunday, “As of last month, North Korean workers in China, Russia and the Middle East were spotted returning home one after another, and there has been movement to avoid hiring them.”

The official added, “North Koreans are flocking to airports and train stations with routes to Pyongyang” such as China’s Beijing and Dandong, and Russia’s Vladivostok and Khasan. In the past, such North Korean overseas workers spotted at airports were just traveling back and forth from Pyongyang, but recently there were indications that they were moving back to the North permanently.

North Korea is operating special flights once or twice daily aside from regular flights between Pyongyang and Vladivostok that are scheduled twice a week, in order to transport its citizens.

The JoongAng Ilbo on Sunday checked the schedule at the Vladivostok airport and found that on Monday, aside from the regular Air Koryo flight JS272 to North Korea, there was also a special flight JS372 to Pyongyang scheduled.

The airport even had a separate area for the North Korean workers to wrap their luggage to accommodate the increased number of passengers.

The rush home for these North Koreans working overseas is in compliance with the UN Security Council’s Resolution 2397.

The resolution was unanimously adopted on Dec. 22, 2017, in response to North Korea’s launch of an intercontinental ballistic missile the previous month, and ordered the repatriation of North Korean overseas workers earning income abroad within 24 months, with some humanitarian exceptions. North Korean overseas laborers have been viewed as a lucrative source of foreign currency for the cash-strapped regime, and their repatriation was a part of the international community’s push to cut off funding for the North’s weapons of mass destruction program.

A UN estimate in 2017 indicated there were over 100,000 North Korean laborers working overseas said to have earned annually $500 million. Most of these workers, who often work long hours for low wages, are based in China and Russia, so these countries’ active implementation is crucial for the effectiveness of the sanctions.

However, the effectiveness of the sanctions has been questioned because despite China and Russia appearing to partake in the implementation, there is evidence that they are exploiting loopholes to continue using the low-cost workers.

An analyst with a South Korean state-run think tank who recently visited China and Russia said these two countries have “sent home some North Korean workers but their low-wage labor is beneficial to the Chinese and Russian economy, thus all kinds of methods to work around this are rampant.”

In contrast to the Chinese central government’s orders to comply with UN sanctions, regional governments seem to be getting more lax on their crackdown for the sake of supporting local economic vitality.

“Without North Korean laborers, China’s border area economy will face difficulties,” said an ethnic Korean living at the border between China and North Korea, adding that such short-term visas are “inconvenient because they have to travel back and forth from North Korea frequently, North Koreans are getting hired covertly through such illegal and evasive methods.”

Earlier this month, China and Russia submitted a draft resolution to the Security Council calling for a partial easing of sanctions on North Korea including the ban on overseas workers. The United States has stressed the importance of maintaining sanctions on the North.

Nonetheless, as North Korean workers can’t be openly hired anymore, the cash flow into Pyongyang is expected to decrease.

Thus, North Korea has been busy luring Chinese tourists, seen as a move to compensate for the squeeze in foreign currency.

In anticipation of this setback, Pyongyang is seen to have used the two-year delay for the repatriation of its overseas workers to find a way to expand tourism and bring in other sources of foreign currency.

Another expert with a state-run research institute said that “starting from last year, there has been a sweeping increase in Chinese tourists making two-day trips” to North Korea’s Chunggang County in Chagang Province, Samjiyon in Ryanggang Province and Sinuiju in North Pyongan Province.

Likewise, the spa resort in Yangdok County in South Pyongan Province, visited by North Korean leader Kim Jong-un earlier this month, is also seen to be a popular Chinese tourist destination, and the expert added, “Chinese authorities are not trying to stop them.”