“The Cloud,” a work by Leandro Erlich, in his exhibition currently ongoing at Buk Seoul Museum of Art in northern Seoul. The work shows the artist’s interpretation of the two Koreas expressed through clouds. His exhibition “Both Sides Now” will run until the end of March 2020. [BUK SEOUL MUSEUM OF ART]


When we try on something new in the changing room, we half expect to see ourselves in the mirror and half someone else — an image of who we want to be.

In his latest exhibition, artist Leandro Erlich places visitors in a maze of changing rooms made of walls, mirrors or entrances into each other. When you expect to see yourself in the mirror, more often than not, you see another visitor staring back at you.

“We usually think [that] the shadow or reflection is secondary value to the thing itself,” said Erlich at the opening of the exhibition at Buk Seoul Museum of Art in northern Seoul on Dec. 17. “So we give more value to the material existence of something than the reflection or the shadow of it. This is also what ‘Both Sides Now’ is about.”

A conceptual artist from Argentina, Erlich is known for using mirrors and water to create reflections in his work. His work “Dalston House,” exhibited in London in 2013, placed a façade of a Victorian house on the ground and suspended a large mirror at 45-degree angle above it. As a result, people could lie down on the facade to create the effect of having their reflections in the mirror show an image of them hanging upside down or dangling from the terrace on the exterior of the house.

“Both Sides Now,” a collection of eight works by Erlich, runs until March 31 and is also designed around the theme of reflections and shadows. 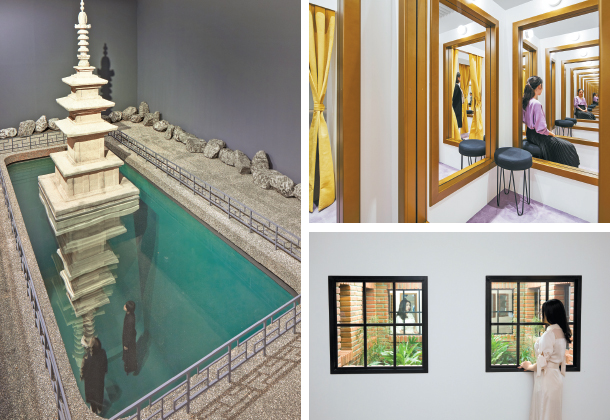 Left: “In the Shadow of the Pagoda” by Erlich was designed to reflect the story of Seokgatap, a stone pagoda in Gyeongju, North Gyeongsang. Right top: A maze of changing rooms created by Erlich as part of his exhibition “Both Sides Now” in Seoul until end of March 2020. Right above: A visitor looks into “Lost Garden” at the exhibition. [BUK SEOUL MUSEUM OF ART]

Those who are familiar with his works will be able to make connections between “In the Shadow of the Pagoda” at the Seoul exhibition with his previous project “Swimming Pool,” which created the illusion of a pool that one can view both from above and inside while staying completely dry.

Viewers can see the pagoda standing upright and its reflections in a pool, but also walk inside the pool and see an upside-down pagoda. The effect is strange, as visitors both inside the pool and above it can see each other through a thin sheet of water.

“We believe that the reflection of the world as we see it, projected through our own perception, is true reality, just as in the legend where the stone mason Asadal’s wife Asanyeo drowns herself in sorrow after she failed to see the shadow of her husband’s pagoda, which she believed to signal his return,” said Bang So-yeon, curator of the exhibition. “By recreating the story’s image of the shadow in physical space, the artist paradoxically highlights the instability of human perception.”

The pagoda’s motif is Seokgatap, a stone pagoda in Gyeongju, North Gyeongsang, and a national treasure of Korea.

A lot of the works come alive when they are enjoyed with others. Works such as “Elevator Maze” and “Lost Garden” invite visitors to step inside a maze of elevators or look inside a garden, both of which use mirrors to play with the reflections of the visitors and their perceptions.

Those who are familiar with Erlich’s works worldwide will be able to make connections throughout the Seoul exhibition especially in the beginning part. “Coming Soon” places visitors in a room full of movie posters, designed and painted by Erlich using his previous artworks and exhibitions as motifs.

“Car Cinema,” a total of 13 life-size vehicles made of sand, will remind visitors of his installation piece in Miami Beach earlier this month, where he placed 66 sand sculptures of cars on the beach, his largest installation work so far and a work he designed to raise awareness about climate change.

The finale of the exhibition comes at the end, where Erlich makes a connection with a situation unique to Korea.

“Inspired by the maps of South and North Korea, ‘The Cloud’ reflects the themes of borderless-ness and transience,” said Bang. “The work consists of nine glass panels on each side showing clouds gathering and dispersing, echoing how the meaning and essence of an individual subject may change according to its surrounding environment.”

“It’s not just about the political relations between the two Koreas but also about this idea of you and me, us and them, the idea of the other,” Erlich told a group of reporters at the exhibition. “I am the other to you and you are the other to me. It’s an exchange of positions.”

The work uses clear glass on which ceramic ink was printed digitally, so that when several of these glasses are stacked together, it creates an effect that appears as if the glasses are holding clouds in their midst.

“When we think about countries, we think they are shaped a certain way,” Erlich said. “But 2,000 years ago, all territories and boundaries existing today were not shaped the same way. I tried to show that by showing clouds shaped like how South Korea and North Korea look like today. Because clouds have one shape at one moment, but they change very quickly.”

Erlich said he stumbled upon the title of the exhibition while pondering several ideas.

“I thought, why not call it ‘Both Sides Now’ and decided to look it up to see how the expression had been used before,” he said. “That was when I came across the title of the song by Joni Mitchell and I thought the lyrics went perfectly with my work because it was also talking about the clouds.”

Mitchell’s “Both Sides Now” (1966) is about seeing things from both sides — about clouds, love and life:

“I’ve looked at clouds from both sides now

From up and down and still somehow

I really don’t know clouds at all.”