A view of a so-called innovative city in Gwangju. The cities were built to host the headquarters of public institutions and help balance development in rural areas. [YONAHP]

When the Korea Institute of Science and Technology Evaluation and Planning moved from Yangjae-dong in southern Seoul to North Chungcheong this month, the grand project of relocating all 153 government institutions out of Seoul and the surrounding Gyeonggi area was complete.

The project took all of 16 years.

According to the Ministry of Land, Infrastructure and Transport on Wednesday, the science and technology institute was the last and 153rd public institution to move out of Seoul and its surrounding area.

The institutions included state-owned research and promotion agencies run by larger government departments such as the Finance or Trade Ministry.

In total 52,000 employees of such institutions are now working in other parts of the peninsula outside of the greater Seoul area.

Among the 153 institutions that moved, 112 are now in so-called innovative cities. 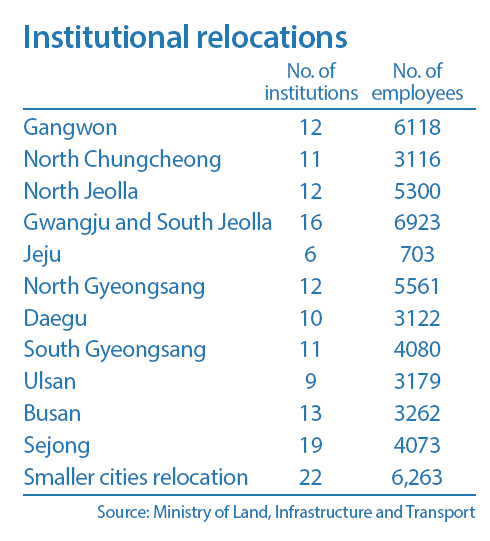 Innovative cities were created for employees of public institutions that relocated to rural areas. They provide housing, education and cultural centers. They are designed to boost cooperation between public institutions, local governments, local universities and research centers as well as local companies.

In Sejong there are 19 public institutions that have relocated. Some 22 agencies including the Korea Centers for Disease Control and Prevention, the Korean National Police University and the National 119 Rescue Headquarters moved to non-innovative cities such as Osong in North Chungcheong, Wonju in Gangwon and Daegu in North Gyeongsang.

“The completion of public institutions relocating outside of greater Seoul will serve as the opportunity to boost innovative cities,” said Joo Hyun-jong, the vice chief of the Land Ministry’s innovation city development task force.

The Land Ministry said the first blueprint for relocating all 153 public institutions was created by the Roh Moo-hyun administration in 2003 to reduce overpopulation in the greater Seoul area and try to balance economic development geographically.

“We will push innovative growth in the new regional growth centers,” the ministry’s Joo said. “We are currently working on an innovative city comprehensive development plan that will include strategic development as well as joint development with neighboring regions.”