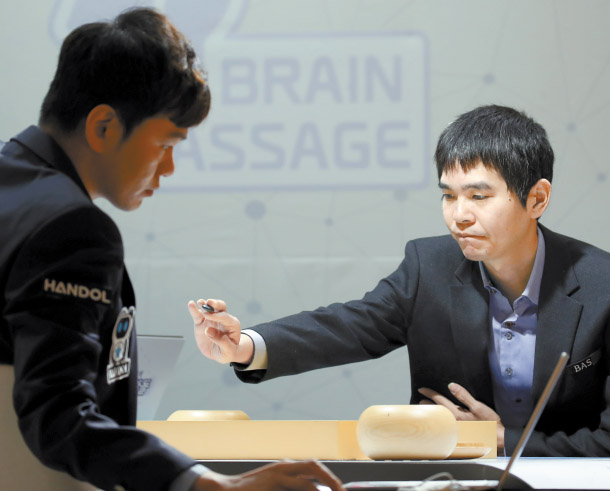 Lee Se-dol, right, plays against the HanDol Go, or baduk, program, which is run on the laptop, during their second game on Sept. 19 in Gangnam District, southern Seoul. While Lee won the first game, he lost the remaining two games. The match with HanDol was Lee’s last game before retirement. [YONHAP]

Lee Se-dol, the only human to beat AlphaGo - a Go-playing computer program developed by London’s DeepMind Technologies, which is now owned by Google parent Alphabet - threw in the towel last month, saying that the machines are just too good.

But in a retirement match last week against a locally developed computer challenger, the champion managed to win one match out of three. The victory suggested that computer development in the country is not quite where it should be.

HanDol, which was developed by NHN Entertainment, made a surprising mistake in the first round, though it went on to take two out of three.

The retiring Go, or baduk, player was given a two-stone advantage in two games, one in which he won, while the third was on a level playing field. The 2016 tournament with AlphaGo was not handicapped.

In introducing its program, NHN claimed that HanDol has scored higher than AlphaGo in the Elo rating system, a method used by DeepMind for calculating the relative skill levels of players in Go. When compared to AlphaGo Zero, a more advanced version, HanDol is on a comparable level, according to the Bundang, Gyeonggi-based company.

The 36-year-old world champion was skeptical in his review of HanDol, saying that the program appears to be weaker than other similar programs, such as Tencent’s Fine Art.

“I thought it would be hard to take down China’s Golaxy and Fine Art,” Lee said after finishing Game 2 last Thursday despite his loss that day. “I thought HanDol was far from complete, especially in a handicapped match.” 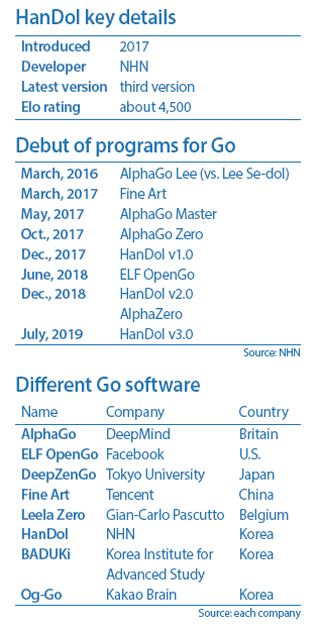 His assessment was primarily based on HanDol’s performance in the first game last Wednesday, where the human player landed a surprise win after merely 92 stones. The game turned on Lee’s Move 78, the exact same move in which he gained the upper hand in Game 4 against AlphaGo three years ago.

Experts and players of the board game at the time praised the move, saying it was beyond what a machine could fathom.

But this time’s Move 78 was easily predictable, according to Lee.

“In the match with AlphaGo, Move 78 was something that most players won’t make,” he said in a postgame press conference. “But this time around, the move was predictable and a conventional action that any professional player might take. It is surprising that HanDol didn’t recognize it.”

NHN explained that HanDol’s loss could be attributed to its relatively short practice time for a handicapped match. Handicaps are used to level the playing field between people of different skill levels, giving the weaker player a head start.

“It has been only two months since HanDol learned to play a handicapped match,” said Lee Chang-yul, head of the artificial intelligence (AI) game team at NHN. “The more data processing and learning are done, the higher the capacity of machine learning is. But this time, it was not the case.”

Tencent’s Fine Art, which debuted in March 2017, beat Chinese Go master Ke Jie last year with a head start given to the human player, although it is not known how long or many hours Fine Art practiced for the handicapped match.

Go experts have mixed views on Lee’s victory over HanDol. Cho In-sun, a live commentator who serves as a coach for the national team, said that many Go players could not make the same decision as Lee.

“Lee said that the move was sort of an easy shot, but many professional Go players and AI programs couldn’t expect it,” Cho said.

The 2016 match between the Go master and AlphaGo inspired NHN Entertainment to develop HanDol.

The first version came out in December 2017, and since then, the software played more than 100 million games using data from online game portal Hangame.

What distinguishes it from the peers, NHN says, is a technique called ensemble inference, which allows only high-performing neural networks to choose the next move.

Shin’s current Elo rating is 3,697, the highest for human players, while HanDol’s rating is estimated to be over 4,500, according to NHN.

Despite the great feat, its performance with Lee fell short of expectations given its perceived lack of skill in handicapped games.

Lee Joo-young, an advanced computing professor at the Korea Institute for Advanced Study who developed a Go program called BADUKi, said that not all programs require significant time and effort to master a different format of Go.

“I don’t know fully about how other companies develop and upgrade their Go programs,” he told Korea JoongAng Daily.

“But in the case of BADUKi, I let it play handicapped games with Go players starting this March, and it won two-thirds of 50 games, and no extra work or input of data was needed,” he said.

A spokesperson at NHN said that it will continue to improve HanDol and plans to install HanDol on a server.

“The platform will let anyone interested play Go with HanDol,” the spokesperson said. “It could be launched as early as next year.”

Park Geun-han, a senior research and development official of NHN Entertainment, said in January that HanDol’s application could be broader.

“The AI program could be applied to any sector involving success or failure,” Park said. “It could be used to measure the level of a certain game and help in making better shopping recommendations.”