Retailers do well as the Sales Festa event helps

Retailers do well as the Sales Festa event helps 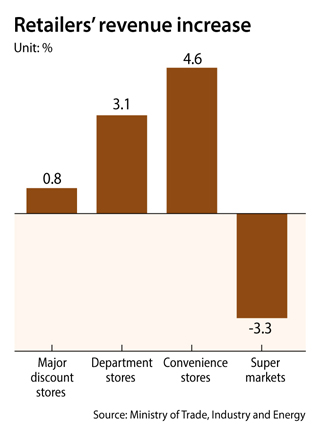 Sales at retailers grew at a rapid rate in November, in part due to the Korea Sales Festa event, which was held last month.

According to the Ministry of Trade, Industry and Energy on Wednesday, the revenue of retailers in November rose 7.5 percent to 11.9 trillion won ($10.2 billion). That is the sharpest increase since May this year, when growth was also 7.5 percent.

The combined revenue of the department stores detailed in the study - Lotte, Hyundai and Shinsegae - greatly contrasted the performance of the three major discount stores - Emart, Homeplus and Lotte Mart - for which revenue grew at 0.8 percent.

“The offline retailer revenue increase was largely the result of the shopping events in November, including the Korea Sales Festa,” said a ministry official.

The increase in sales at department stores came as a surprise as there have been growing concerns over the lack of participation from major companies as well as a lukewarm response from consumers to Korea’s Black Friday.

The government not only moved the date of the sales event from September and October in previous years, but the sales event period was also doubled in duration, to run more than 20 days to encourage more consumers to participate.

One of the reasons for the relative lack of interest was the size of the discounts, which are not as deep as those offered during Black Friday in the United States and China’s Singles’ Day.

The one-month-long sales event was first introduced during the Park Geun-hye administration in 2015 to encourage consumers to spend after consumption dropped sharply that year due to the public’s fear over the Middle East Respiratory Syndrome, which claimed 38 lives and resulted in the quarantine of 12,208 people.