Top-heavy chaebol prune at the top

Top-heavy chaebol prune at the top 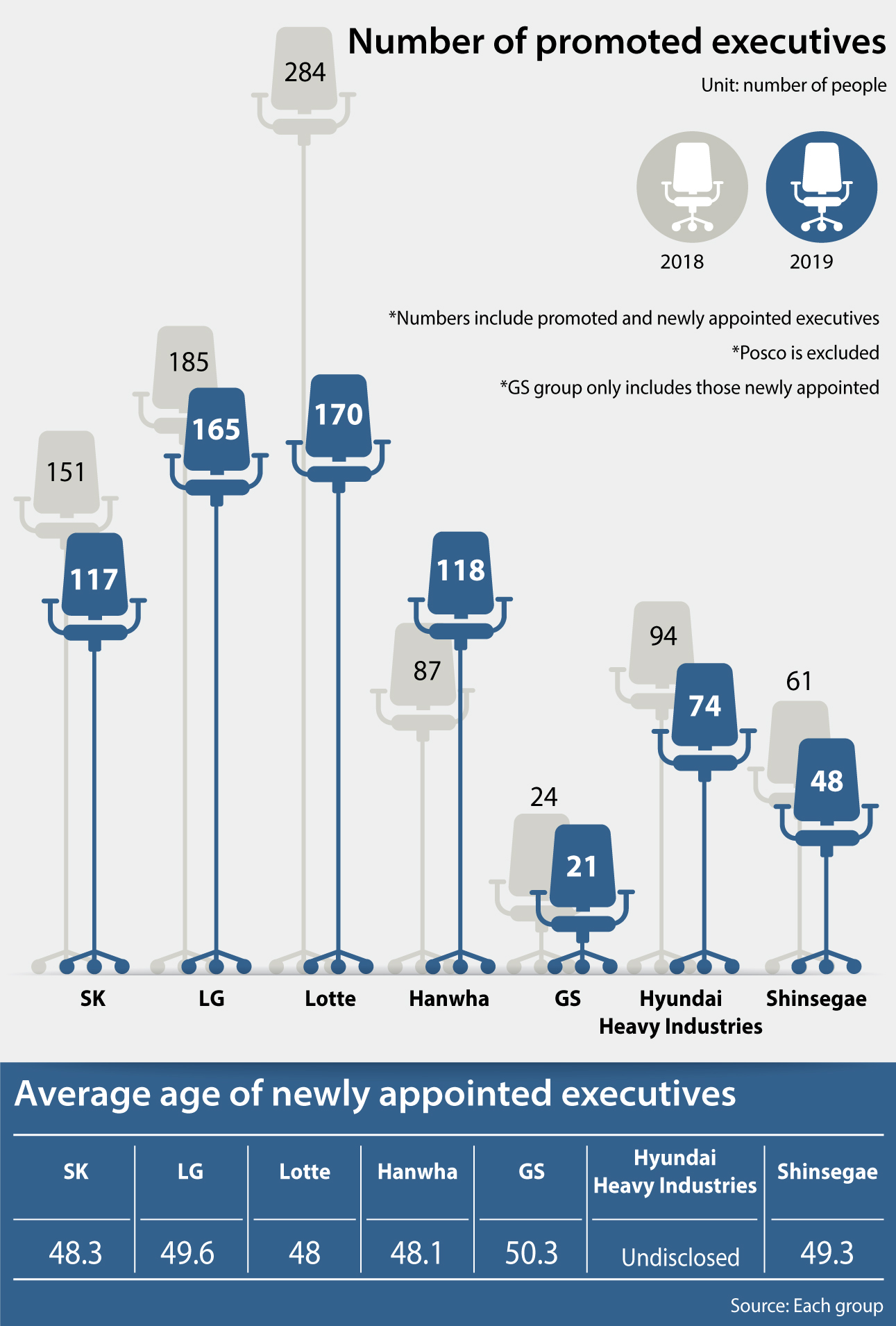 As Korean companies economize, they are becoming less top-heavy, and the annual reshuffling ritual is leaving fewer people at the top of the chaebol.

This year, Lotte Group promoted or appointed 170 executives. That’s down 40.1 percent from last year’s 284. The reduction can only be partly explained by the sale of the group’s financial units. In 2019, Hotel Lotte unloaded majority stakes in Lotte Insurance and Lotte Card.

SK Group this year only promoted or newly appointed 117 executives, which is down from last year’s 151. Only nine current executives got promotions, while 39 did last year.

According to JoongAng Ilbo’s analysis of reshufflings completed by eight chaebol, becoming an executive in a big group is more difficult than ever before. Fewer executives are getting promotions, while young CEOs are increasing in number. CEO positions in the groups are dominated by those born in the 60s.

So as companies grant fewer promotions and as the average age of executives falls, it is getting far more difficult to stay employed at one of the large groups over the long term.

Among the groups on the top-10 list, Hanwha was the only one with more promotions than last year, up from 87 to 118.

LG Group, which gave 185 promotions last year, granted 165 this year. Hyundai Heavy Industries reduced the number from 94 to 74, and Shinsegae from 61 to 48.

Despite the lack of promotions, totals in management are generally stable. SK Group’s executive numbers increased from 770 to 780, while LG Group is at 900, a slight decline from last year’s 906. Lotte Group is not much different, keeping the number around 600 to 700 executives this year and the last year.

“Companies are giving one more year for existing executives to show proper results,” said an industry source who requested anonymity.

As the generational transition takes place, CEOs born in the 1960s are now on the frontlines of management. Among newly appointed CEOs of SK Group, Park Sung-ha of SK Holdings C&C, Lee Young-wook of SK Materials and head of Investment Center 2, Choi Jin-hwan of SK Broadband and Cha Gyu-tak of SK Lubricants, are all in their 50s.

Lotte Home Shopping’s sales head Hwang Beom-seok has been appointed as Lotte Department Store’s new chief. Lotte Mart Executive Director Nam Chang-hee is to lead Lotte Super, and executive Director Cho Young-je is to take the helm of Lotte e-commerce. All of them are in their 50s.

Emart appointed Kang Heui-seok as the new chief of the discount chain. Born in 1969, the 50-year-old CEO is the same age as general managers.

After GS Group Chairman Huh Chang-soo stepped down, his youngest brother and the GS Home Shopping CEO Huh Tae-soo was appointed to lead the group. CEO of GS Retail Huh Yeon-soo, nephew of newly-appointed Chairman Huh and second son of late Chairman Huh Shin-koo, was promoted to be vice president of the group.

Lotte Group is using competition as a management strategy. Vice president Song, who was the head of Lotte’s hotel and service business unit, became the co-CEO of Lotte Corporation together with vice president Hwang Gak-kyu.

Dramatic shifts have been most evident at companies that are struggling. After LG Electronics Vice President Cho Sung-jin and Jung Do-hyun stepped down, Kwon Bong-seok was appointed as the new CEO.