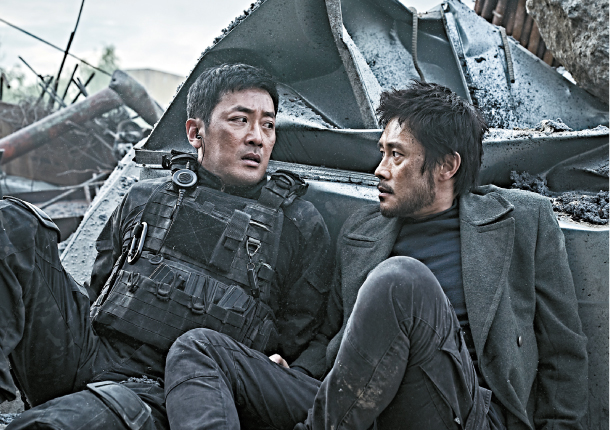 Local blockbuster “Ashfall” was released in theaters last week with a great deal of anticipation from local audiences, but the film turned out to be more of an untimely buddy film between North and South Korean agents. [CJ ENTERTAINMENT]

One of the most important factors of a good film about natural disasters or apocalyptic situations lies in creating convincing motives for the characters’ survival.

Other elements, such as the validity of their sacrifices or how the disasters happen, are up to the actors and scriptwriters to stretch peoples’ imaginations and have it play out on screen.

In that sense, the local blockbuster “Ashfall” failed spectacularly to convince audiences why the main characters needed to survive, instead relying on the rapport between the film’s two stars - Ha Jung-woo and Lee Byung-hun - to provide laughs and keep the story moving. Ha plays Jo In-chang and Lee plays Lee Jun-pyung.

The film poses an interesting question - what would happen to the Korean Peninsula if the dormant volcano Mount Paektu erupts again?

The exciting first 10 minutes or so may trick audiences into believing that this will be a good film. The movie’s co-directors, Lee Hae-jun and Kim Byung-seo, said at a press conference that it took them 10 different takes to shoot the five-minute-long scene that takes place in the streets around Gangnam station in southern Seoul, and I applaud them for their effort.

The computer-generated imagery (CGI) technology vividly shows how the earthquake begins to destroy one of the country’s most recognizable areas, and Jo escapes while the ground is breaking apart beneath him. The vividness and reality of the event was enough to immediately hook audiences on to the magnitude of the catastrophe.

However, their second attempt to film in a familiar location turned out to be just a ruse to show off their advanced CGI technology. In the scene, a pregnant Choi Ji-young (played by Bae Suzy) is stuck in her car while a large wave from the Han River is about to hit the bridge. The next scene immediately shows that she escaped as she resurfaces from the water.

Even if Choi knew how to swim, it still seems like an impossible task for a pregnant woman close to giving birth to escape a sinking car that she couldn’t get out of even on land.

I also had to prevent myself from rolling my eyes when Bae first appeared in the film with a large belly. I understand that making Jo’s wife pregnant gives him more motivation to make it back to Seoul alive to see his loved ones, but I don’t understand why Bae was cast in the role.

The youthfulness of Bae is highlighted in the brief scenes when Ha and Bae show up together. I winced at the scenes where they appear together because of their obvious age gap (16 years) that could not be covered up by the actors’ superb performances. Next to Bae, Ha looks awkward.

What the film fails at most of all is setting a motivation for the characters to act the way that they do. Instead, the movie focuses too much on the humor between the characters Jo and Lee.

Lee is also set as a lonely figure whose paternal love inspires him to sacrifice himself to save the nation. The movie’s biggest cameo, Jeon Do-yeon, gives off a breathtaking performance as Lee’s charismatic wife that I became curious for the first time to find out more about their story, but that ends abruptly when Jo and Lee are whisked away for their mission and I slumped back in my seat, feeling bored again.

I don’t understand why the directors chose to focus on comedy during a natural disaster film. Throughout their mission to stop the volcano from erupting again, Lee and Jo continue to bicker with each other, and I suppose the comical elements were added to balance out the seriousness of the situation.

But the constant jokes and bickering were out of line when the fate of the peninsula lies on the shoulders of the two characters.

At the film’s press conference, Ha said that he was attracted to the script because the characters found humor even at the brink of a calamity. But I thought that there were too many laughs and the comedy was untimely, merely a tool that the directors seemed to be obsessed with.

I also don’t understand how Lee and Jo began to trust one another in the midst of their squabbles, but suddenly, seemingly out of nowhere, it’s them versus the rest of the world.

As the story nears the end, more and more the film seems to be a repeat of cliches commonly found in films about natural disasters: the sacrifice of a lonely hero and a survivor who still manages to get a happy ending with his family.

All in all, the directors failed to use the good ingredients they had at their disposal - veteran actors and an interesting plot - to cook up a good story. I don’t know why the directors bothered to include stars such as Jeon Hye-jin, Ma Dong-seok and Bae when their characters are not very important to the story. If the film was going to stick to the predictable theme of familial love, it should have at least had a more interesting story instead of only focusing on the developing buddy relationship between the two agents.

The film currently sits atop the local box office, having sold more than four million tickets in a week since its release. But perhaps the film’s commercial success is largely influenced by its monopolization of movie screens - it was shown in more than 1,900 screens during its first week in theaters and the film is currently being screened in more than 1,500 screens. Compared to the ruckus caused over the dominance of “Frozen 2” at local theaters, the local film industry seems to be relatively subdued in the case of a domestic film.