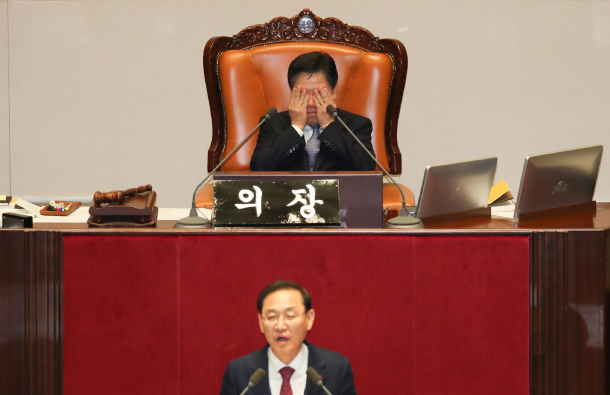 Joo Seung-yong, the deputy speaker of the National Assembly, rubs his eyes as Rep. Jung You-sub of the main opposition Liberty Korea Party speaks at the podium on Wednesday, three days into a filibuster to block an election law revision bill. [LIM HYUN-DONG]

Korea’s legislature spent Christmas Day locked in a raucous filibuster debate over a contentious - and inevitable - electoral reform bill formally introduced to a vote by the ruling Democratic Party (DP) and its minor allies Monday evening.

After arriving at a hard-fought compromise agreement on the final contours of the bill with other members of its “four-plus-one” alliance on Monday, the DP opened a plenary session at the National Assembly to vote on the proposal, which, packaged together with another set of prosecutorial reform bills, were put on the fast-track in April amid fierce backlash from the main opposition Liberty Korea Party (LKP).

With the bill now on the precipice of being made into the law that would govern next April’s general elections, the LKP responded on Monday by kicking off a filibuster debate that it had warned would follow if the fast-tracked bills were ever put to a vote.

In order to prevent the LKP and its minor conservative allies monopolizing intense media scrutiny through hours-long filibuster speeches, DP lawmakers countered by joining the debate with their own speeches expounding on the need for electoral and law enforcement reform in Korea.

For three days, legislators on rival sides traded off in lengthy speeches filled with political tirades that diverged far from discussions over the actual bill. LKP lawmakers in particular focused much of their attacks on Speaker Moon Hee-sang, who they accused of being responsible for a “legislative coup,” and protested what they claimed was the DP’s infringement of the opposition’s “exclusive right” to a filibuster.

While testifying to the deep polarization that defines modern politics in Korea, this week’s filibuster debate however does little to prevent the fast-tracked bills from being voted on.

Parliamentary rules dictate that during extraordinary sessions like this, filibusters on certain bills can only run until the end of that plenary session and that the bills in question must be voted on at the beginning of the next plenary session.

This means that the filibuster debate must end with the expiration of the current plenary session at midnight on Wednesday, and that the DP and its allies can open a new plenary session on Thursday to vote on the bills without any obstruction. This process is likely to again be repeated in following days with the second set of fast-tracked reform bills, concerning reform of the powerful state prosecution service.

Together, the “four-plus-one” coalition - which includes the DP, Justice Party, Party for Democracy and Peace, a pro-reform faction of the Bareunmirae Party and a splinter group of Jeolla region lawmakers - have the necessary majority to pass the reform measure.

In truth, however, no member of the coalition was satisfied with the ultimate deal they came up with on Monday, which, after months of partisan scuffling, was heavily whittled down from a host of ambitious plans conceived in April.

The final bill does not make any adjustments to the number of single-member constituency seats to proportional representatives (PR) among the 300-member legislature, largely because of heavy backlash from pro-reform lawmakers from rural districts that would likely get cut.

Instead, of the 47 proportional representative seats, 30 are to be apportioned using a new calculation method in which parties that fail to win enough constituency seats that correspond to their nationwide support margin could be compensated with PR seats. Smaller parties would thus be more likely to expand their seat share in the National Assembly, while the two major parties - the DP and LKP - will likely gain fewer proportional representatives.

Given the zero-sum aspect of the new system - and the prospect that it would be further weakened in April’s legislative races - the LKP on Wednesday formally announced it will create a satellite party, which it tentatively calls the “Proportional Korea Party” purely to exploit the advantages given by the new method to parties with few or no district seats.

The plan, according to the party’s chief policymaker Rep. Kim Jae-won, is to ask LKP voters to transfer their PR votes to this new party, which would then be unaffected no matter how many seats the LKP wins in district races. After the elections, the parties can merge into a single entity that could outnumber any other bloc in the legislature.

While the DP and minor parties have vocally come out against the LKP’s plan, analysts say the threat of the LKP exploiting the system to its benefit may impel the DP to make its own satellite party to expand its seat share. If such a scenario comes into play, it could strengthen both major parties and effectively nullify the rationale behind the reform in the first place, leaving small parties as the ultimate losers.