Moon and Abe agree to disagree

Moon and Abe agree to disagree 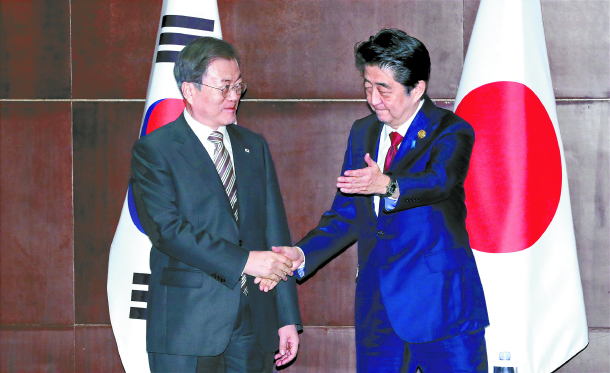 The leaders of Korea and Japan returned to top-level diplomacy Tuesday, but disagreement over a key issue from the countries’ bitter past remains unresolved.

Moon and Abe stressed their intentions to have a “candid” dialogue before the summit, and their hopes to repair deeply strained ties.

“For the two countries to resolve pending issues, a face-to-face meeting and a candid dialogue are the most powerful means,” Moon said in opening remarks for the summit.

“I hope we can exchange our opinions candidly today,” Abe also responded.

After the talks, Abe’s office said the mood was very tense but not hostile. It said the two leaders had a very candid and frank dialogue.

“The largest significance is that Abe and Moon sat down for a face-to-face meeting, had a frank exchange of opinions and agreed to continue dialogue,” it said.

The two sides failed to narrow down their differences on outstanding and interlinked issues - compensation for forced laborers during World War II and a serious trade row.

Korea and Japan share a bitter history, including Japan’s 1910-45 colonial rule of Korea. Enslavement of Korean women in wartime brothels and conscription of forced laborers have been thorny issues.

Bilateral relations deteriorated after Moon took office in May 2017 and scrapped a bilateral agreement settling the issue of Japan’s wartime sexual enslavement of Korean women, signed in 2015 by his predecessor. The diplomatic chill worsened after the Supreme Court of Korea ruled last year that Japanese companies must pay compensation to individual Korean victims of wartime forced labor.

The dispute eventually spilled over to a tit-for-tat trade spat between Seoul and Tokyo as Japan tightened export restrictions on materials crucial to manufacturing semiconductors and displays and removed Korea from a list of trusted trade partners.

Following Tuesday’s summit, the offices of Moon and Abe each made announcements. While the Blue House stressed that Moon urged Abe to withdraw all export restrictions imposed since July 1, Abe’s office highlighted that the Japanese leader mainly addressed the forced labor issue.

According to Blue House spokeswoman Ko Min-jung, Moon urged all export restrictions to be lifted. “It is progress that Japan has taken a voluntary step,” Moon was quoted as telling Abe about Tokyo’s decision last week to partially ease export curbs against Korea for one of the three materials subject to the restrictions. “Japan showed a willingness to resolve the issue through dialogue.”

According to Ko, Abe replied that the export authorities of the two countries should continue talks to resolve the trade spat.

“Abe told Moon that the fundamental reason behind strained Korea-Japan relations is the Supreme Court rulings on the forced laborer issue,” Okada said Tuesday evening. “Because it is an issue concerning the basis and legal grounds for the two countries’ relations, Abe told Moon that Korea must create an opportunity to restore healthy bilateral ties.”

Japan has maintained that a 1965 bilateral agreement on property and claims settlement resolved the forced laborer issue.

Abe also warned against forced labor victims’ selling seized assets of Japanese companies in Korea. “Liquidation of the seized assets must be avoided,” Abe was quoted as telling Moon.

According to the Blue House, Moon told Abe that the Korean government must respect the decisions of the judiciary. Moon and Abe did not discuss any specific resolutions, including a proposed settlement by National Assembly Speaker Moon Hee-sang, the Blue House said. Speaker Moon has proposed that companies and individuals from the two countries could voluntarily create a fund to compensate forced labor victims.

While the foreign ministers of Seoul and Tokyo had a heated debate on the forced labor issue Tuesday morning ahead of the summit later in the day, Moon and Abe tried their best to downplay the discord.

The two countries’ statements both stressed that Moon and Abe agreed to resolve the issue through talks.