Trump laughs off the North’s threat of a ‘gift’

Trump laughs off the North’s threat of a ‘gift’ 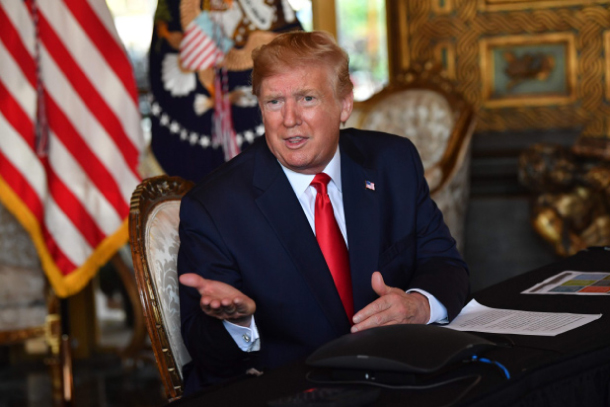 North Korean leader Kim Jong-un’s “Christmas gift” could be “a beautiful vase” instead of a long-range missile test, said U.S. President Donald Trump jokingly about the possibility of a major provocation from the regime before the year’s end.

“Maybe it’s a present where he sends me a beautiful vase as opposed to a missile test,” Trump said Tuesday at his residence in Mar-a-Lago in Florida. “I may get a vase. I may get a nice present from him. You don’t know. You never know.”

While the president may have started off with flippancy to warn the North against taking drastic actions, he added that he would be undaunted by any kind of threat Pyongyang presents, saying he would “deal with it very successfully.”

“Everybody’s got surprises for me, but let’s see what happens. I handle them as they come along,” Trump said.

Yet not all in the U.S. government appear to share their leader’s insouciance.

On Wednesday - Christmas Day in Korea - four U.S. reconnaissance planes were spotted in flybys over the peninsula, signaling that Washington was keeping a close watch over any actions from Pyongyang.

The United States flew four surveillance planes over the Korean Peninsula Wednesday amid tensions and the possibility that North Korea could test a long-range missile as a “Christmas gift.” On the left is an image of the RC-135W U.S. surveillance aircraft and on the right a U.S. Air Force E-8C plane. [YONHAP]

According to Aircraft Spots, a Twitter handle tracking military aircraft movements worldwide, U.S. RC-135W, RC-135S and E-3C planes, as well as an RQ-4 Global Hawk high-altitude drone, conducted surveillance flights in and around Korean airspace, making this a rare instance in which nearly all key components of the United States’ aerial reconnaissance fleet in the region were deployed to a single hotspot.

With several North Korean senior officials warning of disastrous consequences at the year’s end if the United States does not retract its “hostile policy” toward the regime’s economy, Washington has spent the last few weeks trying to keep diplomacy alive. Newly appointed U.S. Deputy Secretary of State Stephen Biegun, who doubles as the U.S. special representative for North Korea, attempted to draw his North Korean counterpart to the negotiating table while on a visit to Seoul this week but failed to get a response.

Yet contrary to many predictions by U.S. analysts that Pyongyang would conduct a high-stakes provocation on Wednesday morning - possibly in the form of an intercontinental ballistic missile (ICBM) test - the moment passed without any notable actions on North Korea’s part.

Another possibility experts like Evans Revere, a former top U.S. State Department official on East Asia, have raised is that the North would fire a satellite using a rocket that can be used to carry long-range missiles rather than an ICBM itself. But satellite launches by Pyongyang in the past involved an advance notification to the International Maritime Organization, which has received no word from the North recently.

The only hint of a possible satellite launch came from the country’s official party newspaper, the Rodong Sinmun, which published an article Wednesday stressing the importance of space development. Citing satellite launches by various countries like Egypt, China and India, the report argued that space development was once monopolized by advanced countries but is now open to all and that technologies necessary for such projects are “intricately linked to economic development.”

While North Korea’s “gift” for Trump may not have arrived in time for Christmas, it is still widely believed that Kim may announce a major policy shift at a plenary meeting of the country’s ruling Workers’ Party expected sometime within the week.

If not, Kim may wait to deliver a bombshell announcement through his yearly New Year’s address.