Gwangju project is off to an inauspicious start

Gwangju project is off to an inauspicious start 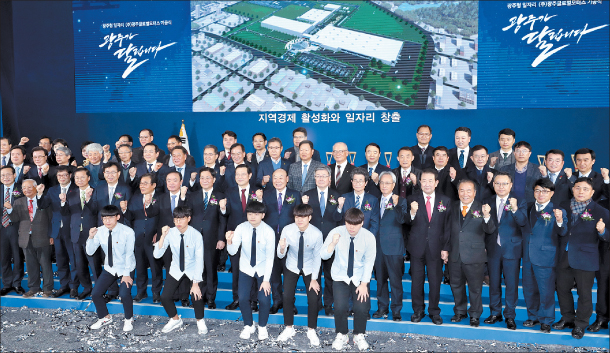 Officials pose for a photo during the groundbreaking ceremony for the Gwangju Global Motors auto assembly plant. The venture involving 36 entities is the first co-growth job-creation project under the Moon Jae-in administration’s Gwangju model. [YONHAP]

The Gwangju model, heretofore but a vision, is becoming a reality as ground was broken on Korea’s first automobile assembly plant in 23 years.

A major initiative under the Moon Jae-in administration, the model seeks to create a win-win relationship between labor and management. It is seen as a template going forward as Korea tries to remain a manufacturing powerhouse in the face of climbing wages and an aging population.

But even before the party started, trouble was apparent, with a key labor group refusing to show up for what was to be a celebration.

The city government is investing 48.3 billion won ($41.6 million) in the project, while Hyundai Motor is pouring in another 43.7 billion won. With investments and loans from others, Gwangju Global Motors is taking in a total of 575.4 billion won to start operations in 2021.

It is the first automobile assembly plant to be built in Korea since the construction of the Renault Samsung Motors plant in Busan in 1998.

As local automobile production volume falls below 4 million units per year following the closure of GM Korea’s plant in Gunsan, North Jeolla, and the reduction of production at Renault Samsung Motors and SsangYong Motor, opening another plant in Korea is seen as a major win for the country.

Gwangju Global Motors is unique in that it employs a low-wage co-growth model, which was inspired by the Auto 5000 project in Wolfsburg, Germany.

The job creation model under the Moon government is providing employees around 70 percent of the average wage of workers at other car plants to reduce the burden of management. But employees at Gwangju Global Motors are to be given better benefits.

Signs of trouble are already evident.

The Federation of Korean Trade Unions (FKTU), one of the two major umbrella labor unions in Korea which participated in project negotiations, has been refusing to attend the opening.

“Our hearts are heavy from hearing a notice that the labor side, the one that should be joining us to celebrate together, is not going to participate in the groundbreaking ceremony,” said Gwangju Mayor Lee Yong-sup in a statement Tuesday, two days before the groundbreaking ceremony took place. “This Gwangju job creation model is now facing a challenge as the labor side, one of the major pillars for this project, announced it will not come to the ceremony.”

As the project is a co-growth model for labor and management, labor’s participation is crucial. The Gwangju city government would be unable to solely handle future wage disputes and direct business initiatives.

The Gwangju city government is the majority shareholder in Gwangju Global Motors, and Hyundai Motor will be in charge of managing the assembly plant and supplying manufacturing and quality control technologies.

The FKTU has been demanding since Gwangju Global Motors was founded that the company establish a board of directors with citizen directors and set a wage limit for executives. It has also asked to have labor union leaders sit as directors and that Hyundai Motor employees be barred from executive-level positions.

Another worry is whether Gwangju Global Motors will be able to get enough orders to make money while in operation.

The market share for mini-size SUVs in the local market dropped from 13.2 percent in 2012 to 7 percent last year, meaning that the vehicle type is not in such high demand in Korea.