Gangwon students dive into the world of analytics

Gangwon students dive into the world of analytics 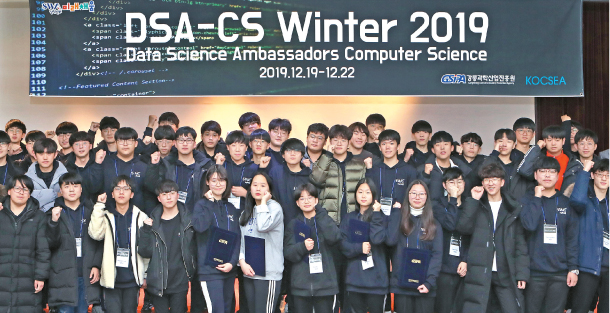 Students from seven high schools in Gangwon pose for a photo together at the Gangneung Green City Experience Center at the end of a four-day camp on data science and programming run by the Gangneung Science and Industry Promotion Agency and funded by the government. [PARK SANG-MOON]

GANGNEUNG, Gangwon - Korea needs more people who understand and can wield data analytics if it wants to excel in a post-fourth industrial revolution world, according to a number of experts who met with high school students in Gangwon over the weekend.

“You heard many times by now that computers are going to take over some work that people do today,” Kim Seon-ho, associate director of the Integrated Media Systems Center at the University of Southern California, said to a class of students from across Gangwon at the Gangneung Green City Experience Center on Sunday.

“But this change also means a plethora of opportunitie20s as new technology will open doors to new paradigms in businesses,” he said. “Many countries like China, India and the United States understand this and are training more students in computer science and engineering. Korea will have to catch up.”

From Dec. 19 to 22, professors who are members of the Korean Computer Scientists and Engineers Association of America and a number of teachers based in Korea taught classes to 50 students from seven high schools in Gangwon.

The seven high schools that participated in the four-day “Data Science Ambassadors Computer Science Winter 2019” camp were selected as part of a government-funded program for software education.

The experts emphasized that the fourth industrial revolution does not necessarily mean an end to human capacity.

“If you want to study engineering, you will have to study computer engineering at some point because you will be required to know how technology works in a world increasingly dominated and connected by emerging technologies like artificial intelligence [AI],” said Shin Hye-won, an employee at education institute Albatross Education Lab in Incheon. “But I want you to remember that it is always going to start with humans. No AI is made without humans. I want you to think about this. Do you want to be run by programs or do you want to be someone who decides what kinds of programs to make?”

The students spent four days learning the basics of data science and the programming language Python, while also finding answers to questions they had about consumer behavior on YouTube, Twitter and other platforms by creating programs that can take in consumer data and produce basic analytics.

Does public opinion of brands such as Starbucks, Disney and Apple have a sway in their stock values?

Does public opinion about refugees vary across Europe and Asia?

These were some of the questions the students tried to answer by creating programs that can run data analysis.

“We designed a program that can recognize positive and negative expressions on Twitter,” said Kim Dong-hyuk, a student at Gangneung High School. “Then we collected the data on the rise and fall of stocks at Starbucks, Disney and Apple and tried to see if there was a correlation in the stock values with consumer opinions.”

“We were only able to run the data of the past two days, so our findings are quite minimal,” said Cho Young-hoon, a student at the same high school and a member of Kim’s team. “But you can tell that, at least for Starbucks and Disney, there is a direct correlation between the two factors - you can see that the scandal Disney was embroiled in regarding the Hong Kong protests and the ensuing public opinion had a negative impact on its stock value, for instance.”

Another group consisting of first- and second-year students from Bukwon Girls’ High School analyzed the public perception of refugees.

“We collected around 1,000 public opinions posted on Twitter from France, Mexico, the United States, Korea and other Asian countries over the past two days and analyzed the positive and negative language used to describe refugees,” said Kim Min-ji, a student at Bukwon. “We were able to find that more negative language was used regarding refugees by users in Asia.

“And part of the reason for that, we thought, was because of a lack of institutional and legal measures for the refugees to resort to,” Kim said. “The more the refugees are able to find security through various institutional means, the less of a threat they will be to the locals.”

Kim’s team placed first among the teams for posing an interesting question, the quality of source codes used, the size of data collected, the analysis of the results and presentation quality. The professors and experts who taught the classes scored the projects.

“It wasn’t easy to try to learn the programming language and create a working program that can analyze data within a span of just a few days,” said Lee Ye-na, a student at Bukwon and a member of Kim’s team. “We stayed up some nights to make sure the program was up and running and our data analysis was solid. It’s nice to see that our efforts paid off.”

The winter camp on Python and data analytics was sponsored by a government initiative to train more students to be IT savvy.

In 2019, the National IT Industry Promotion Agency (Nipa), a quasi-government organization that operates under the Ministry of Science and ICT, designated regions in Korea whose schools would receive special funding for IT-related education programs.

The five regions that were chosen were Incheon, Gangwon, North Chungcheong, South Gyeongsang and South Jeolla. A 35 billion won ($29.4 million) budget has been set aside just for these five regions to use over the next three years.

In these regions, Nipa created so-called SW Future Centers that offer computing lessons to children after school and provide time and space to play with state-of-the-art technology. SW is a common acronym used in Korea to refer to software.

Besides constructing the physical centers and equipping them with programming devices, an integral part of Nipa’s project is to train people to become qualified teachers of computer education and to run programs for students.

The Gangneung Science and Industry Promotion Agency, a research institute run by the Gangneung city government, decided to try something new with the funding and run a four-day camp for high school students in the province with professors from the United States.

The camp also provided some counseling time for the students and their parents to consider pursing a career in the field of computer engineering.

“Experts in the areas of science, technology, engineering and mathematics - known as STEM in the United States - will be increasingly sought after in the job market,” Kim told a group of parents who joined their children on the final day of the four-day programming camp in Gangneung. “There is a reason that the White House plans national security strategies with STEM experts. The world is going to need more experts in STEM and especially those who can approach problems holistically by putting together ideas from different sectors to solve a problem.”

It may also create opportunities for the young and unemployed in Korea.

Youth unemployment in the country climbed to 10 percent in August this year, the highest number since August 1999.

“We are looking at a different generation of people facing different means to survive and make ends meet,” said Lee Jeong-kyu, professor of computer science and engineering at University of Bridgeport in Connecticut, while addressing the parents. “It is our responsibility to help them rise up to these new problems. We have to teach them new skills. That’s what we have been doing in running this camp for the past four days, and I hope that more parents will get involved in helping interested students find careers in this field.”

For Sim Go-eun, a student at Bukwon Girls’ High School, the program helped her narrow down what she wants to do with her interest in computer science.

“The camp helped me decide what I wanted to do with my life, which is to put together engineering with education,” she told the Korea JoongAng Daily. “Especially in this time of the fourth industrial revolution, I think this is something that I can do that I will enjoy, but will also benefit society.”

Some of the experts called on the need for more government-funded education about software.

“Some of the students, when they first join these classes on programming that I teach, they’re just not interested because they have no idea how these things work,” Shin said. “But give them a few weeks of learning the basics about programming, and you can see that some students catch on very quickly and realize this is an area that they can excel in if they put in some hard work.

“That in itself gives so much hope to these students who face, every day, the pressures of the need to get into good schools and get a job at the end of it,” she added.

“I just hope more government funding will be allotted for these types of programs so that we can give more students the same opportunities.”