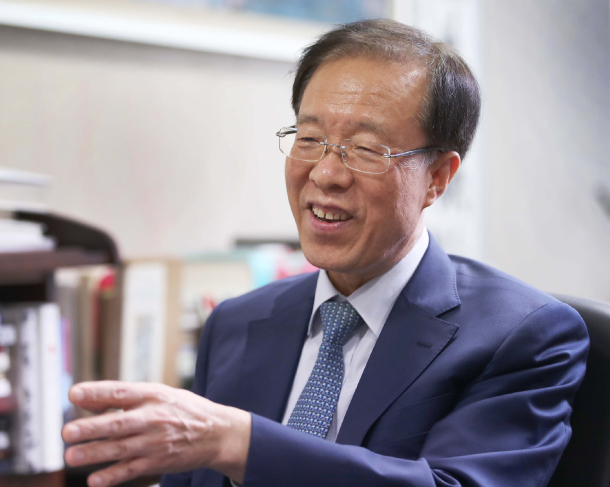 A constitutional appeal was filed just 24 hours after the announcement of the 18th set of real estate measures on Dec. 16, characterized by heavy taxes and strict control of mortgage loans. As the measures took effect on the very same day, a lawyer filed an appeal to the Constitutional Court to seek legal judgment on his claim that “the government’s infringement of property rights that are not governed by law is unconstitutional.”

The JoongAng Ilbo reached out to several lawyers for their professional opinion on this matter, but many were reluctant to talk. One lawyer responded back saying “In a hostile political climate like today, how can someone dare to publicly criticize the government?”

There is increasing speculation that the Moon administration is trying to change the country’s economic system from a free market economy that’s stipulated in the constitution to a socialist system. The JoongAng Ilbo met with lawyer Lee Seok-yeon, the former minister of government legislation and a constitution expert, known to be a “man of principle.”

At his office in Seocho District, southern Seoul, he started off by mentioning the recent real estate ban. Describing its many elements as “unconstitutional,” he said “I would like President Moon and the key leadership of this administration to read the impeachment statement of ex-president Park thoroughly.” Lee said that “when the government implements their various policies, it acts as if it was a ‘bull that ran into a china shop’ since it is obstructing the basic frame of a free market economy nation.” The following are edited excerpts of the interview.

A. It’s not just one or two. The basic ideas of our constitution is to respect the freedom of economic activity, of individuals and enterprises. The recent real estate measure is the exact opposite to that. The government can limit individual rights under the basis of enhancing “public welfare” [Article 37] and “preventing the domination of the market and the abuse of economic power” [Article 119], however, even for those cases I’ve mentioned, the law stipulates the four major principles of the proportion that prevents the government from invading the fundamental parts of one’s basic freedom and rights. Not only did the recent measures have no legal grounds nor go through a legitimate process to refer to public opinion, but they also violated individuals’ private rights by not giving any grace period and obstructed the principle of proportion in the “appropriateness of its method,” “minimization of damage” and the “balance of the benefit and protection of the law.”

Are there any legal grounds for the government to ban real estate loans?

None. The principle of freedom of economic activity is clearly stated in the Korean Constitution. According to Article 126, the management of private enterprises “shall not be controlled or administered by the State, except in cases as prescribed by Acts, to meet urgent necessities of national defense or the national economy,” and will need a legal basis and lawful measures to restrict it. It’s not right to directly limit individuals’ and enterprises’ freedom of economic activity just because Deputy Prime Minister Hong Nam-ki said so. It’s also throwing the blame of its policy failure on to “the haves” [or the wealthy]. Stabilizing house prices is just an excuse. In my eyes, this is a dangerous political move to stimulate the public’s envy to seize victory in the next general election. The current administration is politicizing the economy up to a serious level.

What exactly does “politicizing the economy” mean?

Politics are based on the rule of “absolute democracy” which guarantees one vote for each person. If we apply the same rule to the economy, it loses momentum. Under the system of the free market economy, we will inevitably have a class of people who fall behind others due to unfair results [inequality]. What the government should do is try to bring up those who fall behind. Dragging those above to help those in need is a thoughtless attempt to apply the “one person, one vote” logic of politics to the economy. Our economy is suffering because “the laws of market economy” stipulated in the constitution (Article 119, 126) are collapsing. Accountability and predictability are the two pillars of a market economy. The law of market economy guarantees the two main elements, but the president and the current administration are ignoring them as if it wasn’t big of a deal.

Those are strong opinions.

I used to support the decision to impeach President Park Geun-hye. These days, I am re-reading the impeachment statement over and over again. The reason behind it wasn’t something special. Contrary to popular beliefs, it wasn’t the Sewol ferry disaster nor the black lists. The only reason behind President Park’s impeachment is that the president, as a public servant, exercised her constitutional authority without legal procedures or grounds to mobilize high-ranking officials and private companies that had no obligation to do so and created the K-Sports Foundation for a particular political faction or a certain person [Choi Seo-won]. Even though she had the public purpose of promoting sports in mind. Let’s look at the nuclear phase-out policy or the income-led growth policy the Moon administration unilaterally pushed forward with. Even though the interested parties are in sharp disagreement over these issues, President Moon is only looking at his supporters and refusing to give in, rocking the basic frame of a market economy country.

Why is the Moon administration implementing policies that shake up the market economy?

The basic value that constructs the core of our country’s Constitution is “liberal democratic order.” “Free democracy” and “free market economy” are its two pillars. However, isn’t the government trying to erase “freedom” from them? There is no way that people will tolerate such a thing. However the government considers the reaction from the public cumbersome and is already heading toward a socialist economy. They are trying to divide the nation and collect more supporters to win the upcoming elections. The skyrocketing real estate prices are an indisputable sign that their policy failed, but the government is just not admitting it. “Let’s knock the prices down!” is all they are saying. Milton Friedman, a Nobel Prize-winning economist once said that “the idea that the government can give benefits to the poor by sacrificing the rich is a pure myth.” He mentioned that it will only become a “feast that fattens the powerful and makes the weak difficult.” This is exactly us. The government is full of grandiloquent language, saying they are on the side of the socially vulnerable and the working class but has only caused pain to them. The Moon administration sustains itself through populism and not through normal policies. They are not thinking far ahead and shaking the fundamental frame of a nation since they rush to collect more votes for the next election. Even if they seize victory next year it’s no different than some gamblers cheering their victory over a bridge game on a sinking Titanic ship.

You were the minister of government legislation under President Lee Myung-bak. Could that be the reason why you see the current administration so negatively?

Some might consider me a hard-right conservative, but I am only a “constitutional liberalist” who wants to save my basic rights and constitutionalism. Not only did I point out unconstitutional aspects in President Roh’s decision to move the capital, I’ve also criticized many times unconstitutional decisions from President Lee. I was not subjected to political leanings. The Moon administration hits all the marks of an “imperial presidency.” Judging by their act these days, they are like a group of people who are willing to do anything to extend their power, and on that note, I will continue raising my voice, even if it threatens my life.

The nation needs to consider the current situation with a cool head. If we look at the last story included in Sima Qian’s story of the rich in the Chunqiu [spring and autumn] period of China, “wealth” is considered as an innate desire of human beings. It also criticizes the virtues taught in Confucianism as hypocritical. If a person was unable to create a minimum amount of property for him or herself up to a certain age, that’s not dignified, its just incompetent. How can someone so incompetent manage an organization? Korean people have a uniquely heightened awareness of fairness. On the upside, it promotes a “can-do-it” mentality, but people are very susceptible to political ploys. The current administration is prompting people’s sense of deprivation skillfully. Since it brings in more votes, they are unforgiving about their actions. I have yet to give up my last hope for the president, however, I would like to ask the president where he is headed to and if that direction is really toward a “free democracy” and the “free market system.” If so, I am willing to give support. But, the truth is, I am worried we might end up living in a totally different system that’s been corrupted unknowingly while we are lost in the nation’s applause.