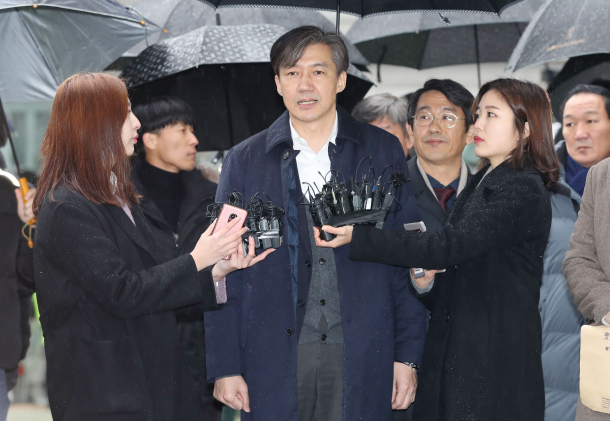 Former Justice Minister Cho Kuk, center, answers questions from reporters at the Seoul Eastern District Court on Thursday, as he attended a court hearing that will decide whether an arrest warrant should be issued for him over his suspected role in ending an inspection into bribery allegations involving a former Busan vice mayor. [YONHAP]

Former Justice Minister Cho Kuk on Thursday attended a court hearing that will decide whether to arrest him over his suspected role in ending an inspection into bribery allegations involving a former Busan vice mayor.

Earlier this week, prosecutors filed for an arrest warrant for Cho, former senior presidential secretary for civil affairs, on charges of abuse of authority in connection with the bribery case of now-arrested Yoo Jae-soo.

Cho appeared at the Seoul Eastern District Court at around 10:05 a.m. The result is expected late Thursday night.

“I’ve been enduring prosecutors’ endless probe targeting my whole family. I do not agree with the content of the writ filed by prosecutors,” Cho told reporters upon arriving at the court. “I will fully explain my stance at the hearing. I hope that a judgment will be made thoroughly based on legal principles, and I believe it will be,” he added.

The hearing comes as Cho is separately under a prosecution investigation into whether he played a role in alleged financial irregularities and academic privilege involving his family.

The prosecution called in Cho twice this month for its probe into Yoo, who was indicted and detained for accepting bribes worth 49.5 million won ($42,600) during his term at the state financial regulator.

While Yoo was under surveillance by the Blue House’s special inspection team in 2017, supervised by then civil affairs office chief Cho, he avoided punishment despite suspected bribery. In 2018, Yoo became Busan’s vice mayor. The development raised suspicions that some presidential officials may have engaged in a cover-up of the bribery case.

Cho claimed through his attorneys that “the ultimate political responsibility is on me” after the first questioning in mid-December. His remarks have been interpreted as insisting that he has no legal responsibility.

If the arrest warrant is issued, state prosecutors’ investigations are expected to gain traction, with the possibility of summoning ruling party and Blue House officials.

But if the court rejects the warrant, the prosecution will likely face a setback over its strong push for the probe. Earlier this month, prosecutors executed a court-issued search warrant for the presidential office in relation to Yoo’s case.

After serving as the justice minister for a month, Cho resigned from the post in mid-October amid controversy about whether he was suitable for the Cabinet post.

President Moon Jae-in appointed Cho as justice minister in August on his commitment to reforming the prosecution.