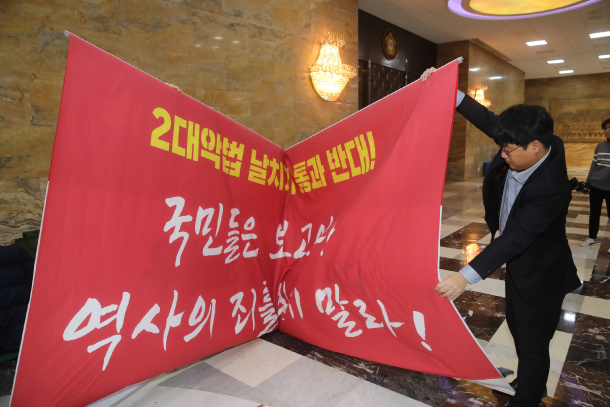 An LKP official removes a sign from the hallway of the National Assembly’s main lobby in the morning on Thursday, after a filibuster of 50 hours and 10 minutes against a bill to introduce a new general election system ended at midnight. [KIM KYUNG-ROK]

The ruling party plans to hold a plenary session today to vote on contentious bills including a new legislative election system, as lawmakers from both ruling and opposition parties ended their filibuster after 50 hours and 10 minutes.

“We will make a request to hold a plenary session tomorrow at the latest,” Rep. Lee In-young, floor leader of the Democratic Party (DP), said Thursday.

“The extraordinary session of the National Assembly began today. As soon as it opens, we will resolutely pass the election law revision bill, prosecution reform bills and other outstanding bills on livelihood issues.”

Lee said he will ask the National Assembly leadership to open a plenary session no later than today after Speaker Moon Hee-sang and Deputy Speaker Joo Seung-yong recover as they had to moderate a plenary session for more than 50 hours without any rest during the filibuster.

Lee said the bills to be voted on at the upcoming session include an election law revision plan and urged the main opposition Liberty Korea Party (LKP) to participate in the voting.

According to the current bill, submitted for voting on Monday, the number of single-member constituency seats and proportional representation (PR) seats in the 300-member legislature remain the same at 253 and 47.

Of the 47 PR seats, 30 are to be apportioned using a new calculation method in which parties that fail to win enough constituency seats that correspond to their nationwide support margin could be compensated with PR seats.

Smaller parties would thus be more likely to expand their seat share in the National Assembly, while the two major parties - the DP and LKP - will likely gain fewer proportional representatives.

The LKP started a filibuster against the bill at 9:49 p.m. on Monday, but the debate automatically ended at midnight Wednesday as the extraordinary session ended at the end of the day.

Although the LKP initiated the filibuster, lawmakers of the DP, Bareunmirae and Justice parties also took turns to express their opinions. A total of 15 lawmakers spoke during the filibuster of 50 hours and 10 minutes.

If the voting takes place, the bill will likely be passed. The DP’s legislative alliance with four other opposition parties has secured over 148 votes, which is the requirement to pass the bill.

The DP also wants to vote on about 20 bills linked to the budget plan as well as other contentious bills to establish a new investigative agency for senior public servants and weaken the prosecution’s investigative powers and delegate them to the police. Three bills concerning the operation of kindergartens are also expected to be voted on.

In order to disable the LKP’s filibuster plan, the DP and four opposition parties will end the current extraordinary session on Sunday, after the election law revision bill is passed. Under the National Assembly Act, a filibuster automatically ends when a legislative session ends. They will start a new session Monday for two or three days.

If they use the same tactic to hold a series of brief extraordinary sessions to counter the LKP’s filibuster, all contentious bills would be passed by mid-January.

Meanwhile, the LKP said Thursday that it has taken legal steps to challenge Speaker Moon’s operation of the National Assembly. The LKP said it filed for an injunction at the Constitutional Court to question the legitimacy of his decisions on Monday to reject the LKP’s request to filibuster a motion to schedule an extraordinary session and introduce the election law revision bill.

“Moon refused to allow a filibuster, obstructing the only means of protest allowed to protect the minority in the legislature,” the LKP said. “He also abruptly introduced the election law reform bill as the fourth item, although it was originally scheduled to be introduced as the 27th item.”

The LKP said it will also ask the Constitutional Court to adjudicate on the competence dispute. “The court must speedily consider the petition and grant the injunction to prevent an irreversible violation of parliamentary democracy and an act of destruction against the constitution,” the LKP said.

The LKP said it already asked the Supreme Prosecutors’ Office on Wednesday to launch an investigation into Moon’s abuse of power. “His latest decisions to introduce the election law revision bill and block the filibuster request are illegal,” the LKP said.