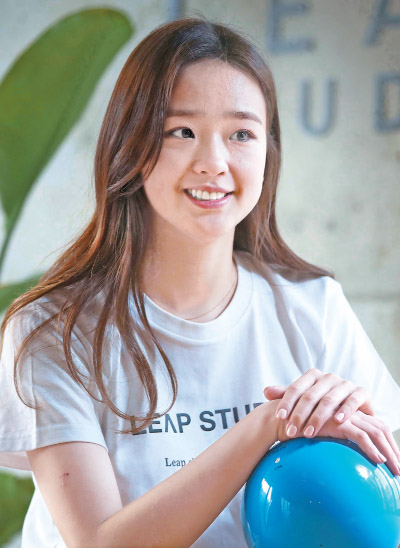 Rather than performing on the gymnastics floor, Son Yeon-jae now hopes to develop the sport by teaching young rhythmic gymnasts and host tournaments. [OH JONG-TAEK]

Two years after she announced her retirement from rhythmic gymnastics, Son Yeon-jae is back in the studio. But rather than being on the gymnastics floor, this time, she’s taking a place on the sidelines in a bid to help develop the sport in Korea.

“In March this year, I opened Leap Studio, where I teach rhythmic gymnastics,” Son said. “The name of the studio, leap, was created to help teach the junior gymnasts leap in their careers. Since there are a lot of kindergartens and elementary schools in this area, there are a lot of children here to learn.”

Son is a living legend in rhythmic gymnastics in Asia. When she made her debut on the senior stage, Son won bronze at the Guangzhou Asian Games in November 2010. After finishing fifth in the all-around women’s individual at the 2012 London Olympics, she started to get international recognition.

At the 2014 Incheon Asian Games, Son became the first Korean rhythmic gymnast to win gold in the women’s individual all-around. But that wasn’t the end as she went on to win three titles at the 2015 Gwangju Summer Universiade. Then, at the 2016 Rio Olympics, Son’s last international event before her retirement, she finished fourth in the all-around, the best finish ever by an Asian rhythmic gymnast.

When Son announced her retirement from rhythmic gymnastics in March 2017, she had a lot of thoughts regarding her career, as she was only 22 at the time. There were rumors about Son becoming a TV personality, but she avoided being on the television as she said, “I don’t have that talent.”

Due to this, Son finally decided to step up and help bring back the popularity of the sport in Korea by opening a rhythmic gymnastics academy and also hosted a junior event.

“Back when I was an athlete, I visited Eastern European countries, powerhouses for rhythmic gymnastics,” Son said. “When I visited, retired athletes were opening academies and hosted tournaments for young gymnasts. That left quite an impression on me. This increased the popularity of rhythmic gymnastics and also found elite gymnasts.”

From this experience, Son opened her own academy called Leap Studio and hosted the Leap Challenge Cup, an international junior tournament for ages 5 to 15.

“When I hosted the tournament for the first time last year, I had to spend quite a lot of my money because we couldn’t really find a sponsor,” Son said. “This year, we got help from a lot of people.”

Although the Leap Challenge Cup was hosted only twice, it has become very popular both in Korea and internationally. Over the past two editions of the tournament, rhythmic gymnasts from China, Japan, Kazakhstan, Hong Kong, Malaysia and Singapore participated at Son’s tournament.

But it’s not only the tournament that she’s focusing on developing. Currently, Leap Studio has a little over 50 students. Although she currently focuses on younger students, Son hopes to make her academy bigger by opening an adult class.

“I’m not just operating a studio,” Son said. “I’m creating a program for different age groups, and I teach the elementary students myself. In preparation for the Leap Challenge Cup, I’ve had meetings with investors.”

Despite Son’s achievement as Asia’s best rhythmic gymnast, throughout her career, she suffered from negative comments online from the fans. But to the younger athletes who are being cyberbullied, Son’s advice is that they shouldn’t bear the psychological pain athletes suffer from the comments.

“When I was a gymnast, I thought it was something I had to bear,” Son said. “But that’s not the case anymore. If younger athletes are being cyberbullied, I don’t want to tell them to bear it. The culture of cyberbullying has to change.”

Although Son has moved away from competing herself and is focusing on her business and advocating against cyberbullying, she has remained in contact with her competitors like Margarita Mamun and Yana Kudryavtseva, both of Russia, who have also started new chapters in their lives.

“I talk to them sometimes so I knew about their marriages and kids,” Son said. “It’s amazing to think that they’ve become mothers because they’re younger than me. I still have a lot of work to do. Since this is my first time in business, there are difficulties, but I also feel proud. I will host the Leap Challenge Cup until it reaches its 50th edition. Once I get there, I believe that there will be an athlete from our academy competing at the Olympics.”