Making another great escape: In ‘Ashfall,’ Ha Jung-woo shows that a little humor helps in the face of disaster

Making another great escape: In ‘Ashfall,’ Ha Jung-woo shows that a little humor helps in the face of disaster 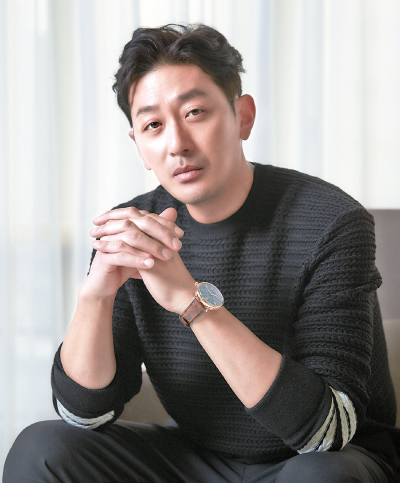 Over the course of his 15-year career, actor Ha Jung-woo has found himself in several precarious situations.

Ha has played many roles over the years, but his characters often find themselves having to tackle various catastrophic situations - stuck in a blocked tunnel for days with only two bottles of water and a birthday cake in “Tunnel” (2016); injured and trapped inside a secret underground bunker beneath the demilitarized zone in “Take Point” (2018); and now trying to stop a volcano from erupting and destroying the Korean Peninsula in “Ashfall.”

But this time, his character, a South Korean agent, is not confronting the situation alone. He forms a grudging alliance with a double agent portrayed by actor Lee Byung-hun, and over the course of the film, they become close friends as it becomes increasingly clear that it is unlikely that they both will make it out alive.

Those who have seen the film may be confused as to whether “Ashfall” is a buddy comedy or a disaster film, but Ha says that humor is often needed in disastrous situations.

“It was same for ‘Tunnel’ as well - there is a need to input the humor that naturally arises out of such circumstances,” Ha said in a recent interview at a cafe in Samcheong-dong, central Seoul. “I admit that my character [in ‘Ashfall’] is a bit more comical compared to my previous ones, but I thought that Jo In-chang was someone that could be [more goofy].

“There was much room for comedy in the script, and I thought that it was okay to have those moments. Even in Shakespeare’s tragedies, for instance, there are similar scenes,” Ha said. 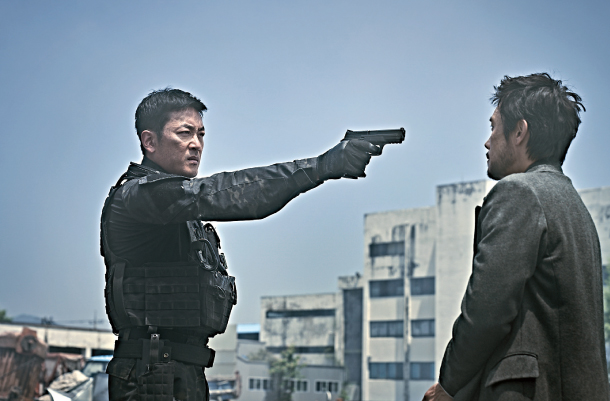 According to the actor, there were more squabbles between Ha and Lee that didn’t make the final cut of the movie.

“I don’t think anything can be resolved in the face of disasters by being afraid,” he said. “In ‘The Day After Tomorrow’ (2004), Manhattan is frozen, and the survivors are lighting fires and raiding vending machines for food. While that can be painful for them, from a outside point of view, it might be seen as a romantic or relaxed moment. I think our film just tried to express those type of moments more actively [than other films about an apocalypse].”

While shooting scenes with Lee was fun, the set was not, Ha noted.

“It was different from ‘Tunnel’ because [in the former], we only had to prepare the set for inside of a car, and we used all kinds of flour, such as bean, mixed grain and black sesame, but for ‘Ashfall,’ we had more trouble because we had to set up a whole field,” Ha said. “Plus, particles of volcanic ash are bigger than dust, so [the ash] was made of pulp [instead of flour] and the actors could actually see them floating around the set. The pulp would get in our noses, and we had some trouble getting it all out after the shoot ended.”

Nonetheless, the chemistry between Ha and Lee was “very much satisfactory,” according to the actor.

“Lee is an actor who just gets the feel of it,” Ha described. “For instance, there is this scene where Lee goes outside to take a leak and I’m handcuffed inside a car. We have one of our spats there, but we actually shot the scene separately. Lee shot the scene first, and I saw that he added much more than what was written in the script. I responded to him after I watched his clip, and that’s how that scene was created.”

Unlike rest of the cast, Ha is familiar with working with computer-generated imagery or CGI technology, and he admitted that pretending to face a volcano explosion was much easier than having a sword fight with imaginary demons in the “Along With the Gods” series (2017-2018) while keeping a straight face.

Surprisingly though, Ha picked his scenes with Bae Suzy as the most difficult part of the film. Ha and Bae play a couple who call each other by cute nicknames.

“I usually work with male actors so it’s somehow more awkward when I’m with female actors,” Ha admitted. “And the scenes we do as a couple are embarrassing, but I still thought our chemistry was great. It’s only that I’m not really good at portraying such lovey-dovey moments. People who have seen the film have told me that they saw my ears turn red [during the scene].”

Although Ha has pulled off roles in rom-coms and serious characters like the Count in “The Handmaiden” (2016), the iconic roles which the public remembers him the most for are characters who have been through a lot or are from the lowest levels of the social hierarchy, such as in “The Yellow Sea” (2010). Ha also said that those types of characters are more interesting for him to play than others.

“For more dignified characters, I guess the roles narrow the range of acting I can do compared to rougher ones who don’t even have a job or a home,” Ha said. “I like to portray the latter which are closer to the reality we’re living in.

“But to be frank, I can’t always work on films that are to my taste. Nowadays, films are more project-centered, and there are huge investments that follow [the film], so I may not always take on scripts that suit my taste. So that is definitely a limit, which is why I like to quench my thirst for films through participating in production and or directing. That’s how I approach films more freely from a fresh perspective, as I did in ‘A Single Rider’ (2017) and ‘The Closet’ [coming next year].”