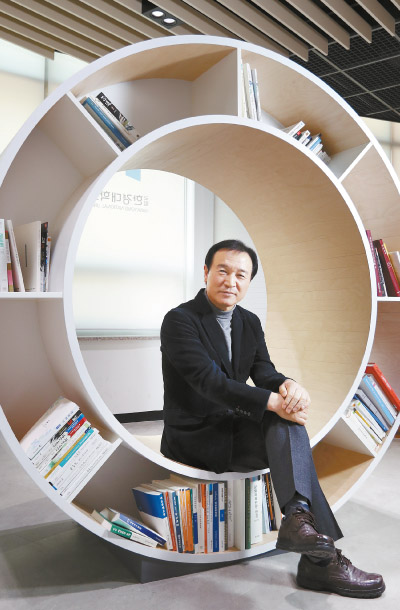 Lim Tae-hee, 63, president of Hankyong National University, talks about his plans to make the school one of the top 30 universities in Korea by 2030. [SHIN IN-SEOP]

Despite its small size, a university located in the city of Anseong, Gyeonggi, has a competitive edge over other four-year universities in the realm of agriculture and life science and the environment.

Hankyong National University, which started as an agricultural school in 1939, has a great affinity toward agricultural education.

“As soon as I became president in October 2017, I made our school’s slogan ‘a university that forges the way’ as it implies which direction our school has to go in the era of the fourth industrial revolution,” said Lim Tae-hee, 63, president of Hankyong National University.

Although the running of a university is a totally unrelated field for Lim, who was a former lawmaker and presidential chief of staff, he radiated enthusiasm for his goal to make the school one of the top 30 universities in Korea by 2030.

Lim emphasized that the school’s goal is to become a university that forges a path and represents Gyeonggi. In order to achieve the goal, the school aims to foster three types of convergent talents: challenging intellectuals, fusion professionals and communicating members of society.

The school has three steps in order to achieve its goal by 2030. The first step, which runs from 2019 to 2021, is to establish a foundation for sustainable growth. The second step from 2022 to 2025 sets the spread of innovation for enhanced operations as a goal, while the third step is to establish an organizational culture to sustain innovation that is set to run from 2026 to 2030.

“If we make the best use of AI and big data, automation equipment, early detection of blights and analyzing people’s preferences become possible,” Lim said. “Hankyong National University will include these kinds of innovative agricultural methods into our education curriculum.”

Lim showed his passion toward a merger with Korea National University of Welfare in Pyeongtaek, Gyeonggi, so that the school will be able to improve its research skills in the quality of old people’s lives.

“An aging population has become a burden to the current generation in which there are less than 300,000 babies born annually,” Lim said. “It is very important for older people to grow older with healthy minds.”

Fine dust is also an issue that Lim wants to focus on. The city of Anseong is heavily polluted. It once recorded the highest concentration of fine dust across the country. In order to prepare a countermeasure, Hankyong National University received about 24 billion won ($21 million) from the government and started their research on fine dust.

The JoongAng Sunday recently sat down with Lim to talk about his specific plans for Hankyong National University.

Q. It’s been over two years since you started to lead Hankyong National University. How do you feel so far?

A. Many people around me said the position of a university president is one of the so-called 3D jobs meaning “dirty, dangerous and difficult.” However, it is a way more reasonable and rational position than working in politics or as a public official. I realized some problems of the Ministry of Education while I worked as the president of a university. It is difficult to run schools autonomously as the government evaluates us on the same criteria as other four-year universities. Just like how high schools’ education became standardized due to the current university admissions system, the government’s standardized criterion worsens the gap among university rankings.

People say that national universities have less freedom of movement than private universities. What are your thoughts?

I want to set an example that can change people’s perceptions of national universities [that they have less freedom of movement]. That was what I pledged before I was selected as president. I’m working with my employees to make that happen.

You said Hankyong National University’s goal is to become a school that forges a path. What kind of path do you want to forge, specifically?

The paths I want to forge include a merger with Korea National University of Welfare on agriculture and life science that is centered on AI in smart farming and a specialization in the environmental sector including on the issue of fine dust. In order to achieve this, challenges and creative thinking are essential.

The concept of AI agriculture sounds interesting. Can you explain more about this?

Hankyong National University has a competitive edge over other four-year universities with its plant seeds and research in biological gas. In particular, our plant life and environmental science Professor Kim Ta-whan has a personal collection of around 1,400 seeds. Furthermore, we invited Professor Min Seung-Kyu to be our school’s chair professor in order to improve research on smart farming. Min, who was a former vice minister of agriculture, food and rural affairs, has been devoting himself to the development of smart farming by running Korea Venture Agriculture College in South Chungcheong.

Is it true that a team that included Professor Min secured a spot in the finals of the Autonomous Greenhouses International Challenge 2019?

Professor Min’s team called DigiLog won second place in the preliminary round for the second edition of the Autonomous Greenhouses International Challenge 2019, which was co-hosted by Wageningen University & Research in the Netherlands and China’s internet-based platform company Tencent, and successfully became one of the five finalists. The team DigiLog, a portmanteau for digital and analog, was named by Lee O-young, chair professor of Ewha Womans University in western Seoul.

How did the finals of the Autonomous Greenhouses International Challenge work?

The finalists were required to produce a cherry tomato crop within six months inside a greenhouse in Wageningen University remotely starting Dec. 19. The five teams had to make choices with respect to the control settings in order to control the crop production and quality growth remotely. Their AI technology decides everything for them including how often the tomato should be watered, the amount of time for sunlight and fertilizer. Just how Go master Lee Se-dol competed with AI, five teams driven by AI need to compete with a human farmer from the Netherlands. Wageningen University & Research compared the results between the five teams and the human farmer including their net profit and qualities. [In the first edition of the Autonomous Greenhouses International Challenge held in 2018, team Sonoma won first place as their net profit on cucumbers was 14 percent higher than the next nearest competitor, the human, who had 20 years of experience in farming.]

You once mentioned that older people have to grow older with healthy minds. Can you elaborate on that concept?

We all should smile. But we should live a healthy life in order to smile. No one can smile if they don’t have a job. Having a job is important. The further steps relate to culture and human relationships; these are the keywords for an aging society.

What kinds of studies are taught at Hankyong National University’s School of Wellness Convergence Science and Industry?

There are departments on the clothing industry, child and family welfare, nutrition and culinary science and wellness sports science. Students will be able to experience convergence in nutrition, fashion, social welfare and sports as they enroll at the School of Wellness Convergence Science and Industry.

What are the reasons behind your plan to merge with Korea National University of Welfare?

A merger between universities is inevitable due to the rapid reduction in the student population. The reason why universities failed to merge with others until now was because they had been only focusing on restructuring and size expansion. Unlike them, Hankyong National University is a new model that amplifies synergy effects. Korea National University of Welfare is a small-sized school that accepts only 211 students annually. However, under the policy of the Ministry of Education, if two four-year universities decide to merge into one school, they should reduce their quota by 40 percent. In the case of a merger between a four-year university and a community college, they should also reduce the quota by 20 percent. This kind of standardized criteria ruins Korean universities.

Many university presidents have complaints about the policies of the Ministry of Education. What are your thoughts?

The Ministry of Education should allow freedom for universities to a certain extent except a few basic regulations. However, they currently limit everything in advance.

What do you think about the Ministry of Education’s control over the university admissions system?

It was a reckless decision to change the college admissions system after former Justice Minister Cho Kuk’s daughter was embroiled in an admissions scandal. The system of early admissions has many advantages though. Students who enroll in universities through early admissions are more adaptable and are more satisfied than those who entered schools through general admissions. It applies to most Korean universities except very few colleges that are ranked at the top. The Ministry of Education will have to suffer when explaining their decision in the future.

What is Hankyong National University’s plan for general admissions for 2020?

We plan to accept students by colleges instead of departments starting in 2020. Students will be able to decide their majors as soon as they become sophomores. We newly made this system in order to foster leaders who have comprehensive understanding in diverse fields. A total of 385 students will be accepted during our admissions application period. Students will be selected according to their scores on the College Scholastic Ability Test except several special departments that require performances tests.

The research on fine dust sounds very interesting. Can you explain more about it?

Our skills on analyzing the pollution levels of food and the quality of water and soil are unequaled. In order to improve our skills in the sector of fine dust, we aim to develop infrastructure to install along roadsides that can reduce 10 to 30 percent of fine dust. If we utilize big data on the seasons well, we can easily predict the direction of the wind. One of our major plans is to make a wind tracker.

[Yes.] It is urgent for Korea to forge a map platform for fine dust in foreign countries. Lockheed Martin has a Doppler lidar technology [light detection and ranging system]. Our joint research will generate a significant synergy effect.