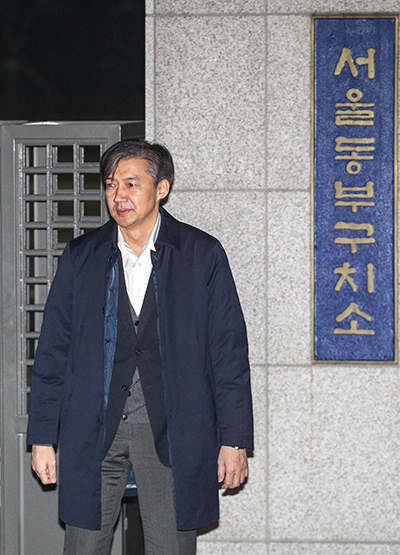 Former Justice Minister Cho Kuk leaves a detention center in eastern Seoul, where he awaited a decision on the prosecution's request to arrest him on charges of abuse of authority, on Friday. [YONHAP]

Former Justice Minister Cho Kuk managed to avoid pretrial detention on Friday, as a local court turned down the prosecution’s request for an arrest warrant to investigate his alleged abuse of power during his service at the Blue House.

Judge Kwon Deok-jin of the Seoul Eastern District Court announced his decision to reject the prosecutors’ request to take Cho into custody at 1 a.m. on Friday, saying Cho is not a flight risk and there is no possibility of evidence destruction, although the prosecution has proven the criminal charges against the former justice minister.

The Seoul Eastern District Prosecutors’ Office requested the arrest warrant against Cho on Monday on suspicions he abused his power in 2017 when he was serving as presidential senior secretary for civil affairs by curtailing a Blue House probe of Yoo Jae-soo, Busan’s former mayor for economic affairs and an associate of President Moon Jae-in. Cho, who resigned after a short and scandal-plagued tenure as justice minister in October, was questioned twice earlier this month in the Yoo probe, and prosecutors subsequently obtained Prosecutor General Yoon Seok-youl’s approval to seek his arrest.

The court held the warrant hearing for four hours and 20 minutes on Thursday, and Cho awaited the decision after pleading his case at the Seoul Eastern Detention Center.

“The prosecutors have proven criminal charges against Cho, although the suspect is denying some aspects of the charges,” Judge Kwon said in his verdict on Friday. “But there is no concern for evidence destruction at this time because the prosecution’s probe has progressed significantly.”

Kwon cited that Cho didn’t seem to commit the alleged crimes for his private gain as one of his grounds to turn down the warrant request.

Kwon also said he decided to turn down the request because Cho’s wife, Chung Kyung-sim, is being tried under detention for a separate case. In Korea, it has been customary that a married couple is not detained at the same time.

While keeping him out of detention, Kwon made clear that Cho’s charges are serious and heinous. “The suspect’s abuse of power to end the inspection into Yoo caused the rule of law, a basis of our society, to regress,” Kwon said. “He also disrupted fair operation of state affairs.”

After the decision was announced, Cho immediately left the detention center without answering any questions from reporters.

Cho has been claiming that “the ultimate political responsibility” is on him, indicating that he has no legal responsibility. According to sources close to the case, Cho continued to argue that he is responsible for the “political decision,” but that is not a crime. Cho argued that he did not shut down the inspection on Yoo. He said he had decided to inform the Finance Services Commission about the suspicions surrounding Yoo, a state financial regulator at the time, to take necessary action.

While Cho avoided detention, the prosecutors managed to score a small victory given Judge Kwon’s verdict that they have proven serious criminal charges against Cho.

The Blue House welcomed the court’s decision. “The decision shows that the prosecution had gone too far to seek the detention warrant,” presidential spokeswoman Ko Min-jung said Friday. “We’ve made clear repeatedly that the office of the senior presidential secretary for civil affairs, although it does not have investigative authority, had conducted some [investigative] operations based on political judgments. The prosecution was using the abuse of power charge to seek the detention warrant, and the court’s final decision on this case will clearly define the scope of the office’s authority.”

The prosecution said it will think about reapplying for a warrant, but speculations grew that Cho would be indicted without physical detention since the court said prosecutors have proven enough suspicions.

While the ruling Democratic Party welcomed the court’s decision, the opposition Liberty Korea Party (LKP) and Bareunmirae Party expressed frustration. “In front of endless evidences, Cho is still denying his crime, but the court said there was no concern for evidence destruction,” said Rep. Jun Hee-kyung, spokeswoman of the LKP. “Who can possibly accept this?”

The public, particularly conservatives, also deplored that Cho managed to stay outside jail. For hours on Friday, “Kwon Deok-jin Out” has been listed as the most searched words on major portal site Naver.