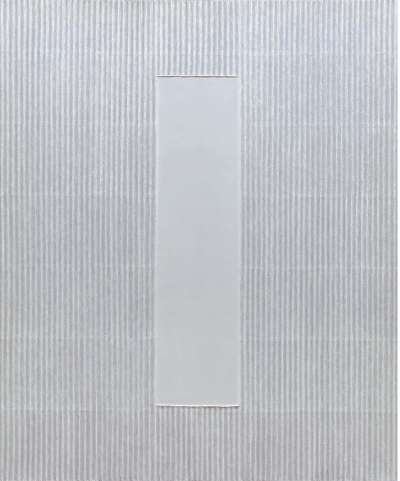 BUSAN - The true beauty of the work of abstract artist Park Seo-bo is hard to feel unless seen up close in person. Now, there’s a place to do just that in Busan - the Johyun Gallery in Haeundae and Dalmaji in Busan.

Born in 1931, Park began his artistic career in the 1950s with repeated patterns of pencil lines on canvas at a time when abstract art had not been properly introduced to Korea. He moved onto using hanji [Korean traditional paper] in the process and began experimenting with his famed straight-line patterns in 1991. Since the depth of the paper is not properly visible on the screen, it’s best you see the work in person to fully grasp his art.

Across two galleries situated in eastern Busan, Johyun Gallery presents Park’s 12th solo exhibition with the gallery since 1991 - a feat that was possible through the “special relationship between the gallery and Park,” according to Jung Jae-ho, director of Johyun Gallery and Gallery2.

“No other gallery in the country has had a Park Seo-bo solo exhibition more than four times,” Jung said.

“This exhibition features Park’s later works from 1991 to 2018, during which he stuck hanji on a canvas and used his fingers to make a 3-D pattern to experiment with the materiality of paper and the physicality of his body. He created black and white projects first but moved onto more vivid colors later.”

The earlier works - mostly black and some white - are on display at the Dalmaji branch, while the brighter colored canvases are hung up at the Haeundae branch. Park began using brighter hues in 2000 when he looked at the colorful leaves of autumn trees shining in the sun. He has since been trying to take colors from nature to translate that beauty onto the canvas, according to the gallery.

“He has never rested for a minute during his 70 years, and we hope that this exhibition is a chance for people to see how he changes into the future too,” Jung said.

The exhibition runs until Feb. 16.