Daniel Boyd’s works are more than meets the eye: Aboriginal artist pushes against history written in the British colonial era

Daniel Boyd’s works are more than meets the eye: Aboriginal artist pushes against history written in the British colonial era 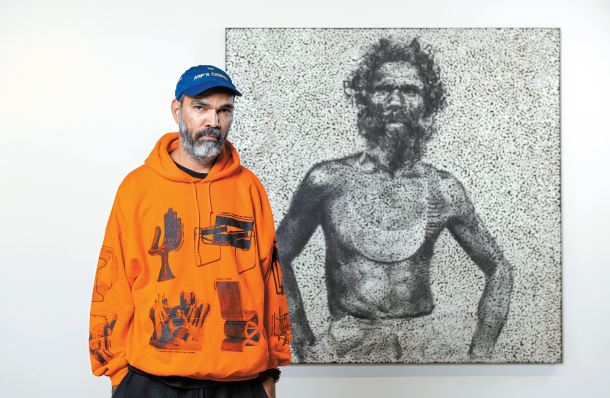 Sydney-based artist Daniel Boyd stands next to his work “Untitled (YMKSMRWAKP)” (2019) at Kukje Gallery in Busan at the opening of his solo exhibition “Recalcitrant Radiance,”. [KUKJE GALLERY]

BUSAN - Looking at Daniel Boyd’s work from afar, it’s quite clear what the black-and-white figures on his works are - even if it’s an abstract pattern with no particular shape. As you step closer and closer to the work from a distance, you can see that between the white dots are black spaces, like the space between the stars in the night sky. But do not mistake what looks incomplete for sloppiness because it’s the very space between the dots that completes his work and his world of art - a world where people fill in the missing gaps with the knowledge they know, and what builds up over time is history.

“It is about knowledge or understanding of historical experience that have been lost through memory,” said Boyd.

“So the black space in between the dots is about acknowledging that we never fully comprehend the past and that we can never fully comprehend the future. It is also making the unknown, misinterpreted or misunderstood, visible in the painting. […] It is about how each individual has a right to their own understanding of their place in the universe.”

When Boyd met with local press earlier this month for the opening of his solo exhibition “Recalcitrant Radiance” at Kukje Gallery in Busan, he began by explaining his aboriginal heritage that made him focus on how Australian history was written by the dominant British voice. “My experience, my art that I make starts with questions I have about where I am placed within the whole,” he said. 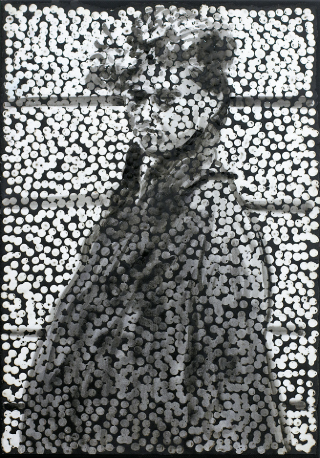 Boyd uses dots to create black spaces on the canvas to symbolize the ignorance in people’s perceptions, such as through “Untitled (WWBMDIS)” (2019). [KUKJE GALLERY]

In answering his questions in the context of the greater Australian history, Boyd used old photographs of Australia shot during the British colonial era to recreate the image to visualize the ignorant perspective that wrote an oppressive history. By using blots of glue on linen, Boyd left black spaces on the canvas to create the plurality of his work which symbolizes both the lopsided perspective of a stronger entity, as well as the need for people to accept the beauty in difference. He started using the technique in 2009 and was chosen to participate in a group exhibition for the 56th Venice Biennale in 2015.

According to Boyd, the way humans begin to process the things they come across for the first time is through the knowledge they’ve accumulated beforehand. Simply put: You understand the world based on the knowledge you already have. So when two parties come across each other for the first time but one entity is much stronger than the other, that encounter is recorded strictly in the eyes of the one with the bigger say. That’s how the dominant history is recorded and also how British forces first came in contact with the aborigines living in “New South Wales.”

“When the British came, they had a dominant lens that they viewed, or projected through - they projected their knowledge onto the landscape,” Boyd said, explaining his work “Untitled (YMKSMRWAKP)” (2019). The painting was taken from a picture of a Yugara man, an ancestor of Boyd’s, taken around the 1880s. According to Boyd, he was named King Sandy by the British rulers - a method used by the British to control the aboriginal people and have someone in between the two cultures.

“What I am interested in is the representation of people, historically, and understanding that the lens that they were viewed through, it was from this dominant Eurocentric historical narrative. And what I’m doing by making a painting about an ancestor of mine is... augmenting the understanding of this image and allowing an extension of that understanding,” he said.

By taking an image from the past and recreating it in the 21st century, Boyd explained that he is “introducing it to the cannon of art” to shift the understanding of what the image means. So no longer is the picture of King Sandy an accurate portrayal of a man from New South Wales, but it is evidence of history’s bias and prejudice.

“Throughout history, they have been on the periphery, so usually on the edge of [a] painting. So putting them at the center of the work is about shifting or augmenting that understanding of [the] history of art,” said Boyd.

Other works are similarly taken from Australian history. Even the geometrical shapes in some works are from actual images of sand drawings from the 19th-century era. They were drawn by slaves who were forced to work at plantations in Australia and recorded by rulers as anthropological documentation of the aboriginal people.

“I am interested in how the sand drawing, how it is understood in its original context, how it enters academia through anthropology and then how it comes back to me,” he said.

At the end of the day, what’s important for Boyd is that the viewers take home their own conclusions and experiences that are not dictated by the artist. Be prepared fill in the blank spaces with your own mind.

The exhibition runs until Feb. 29.