Cooking shows get viewers in on the action: Popular food programs take away the mystery of where people’s food comes from

Cooking shows get viewers in on the action: Popular food programs take away the mystery of where people’s food comes from 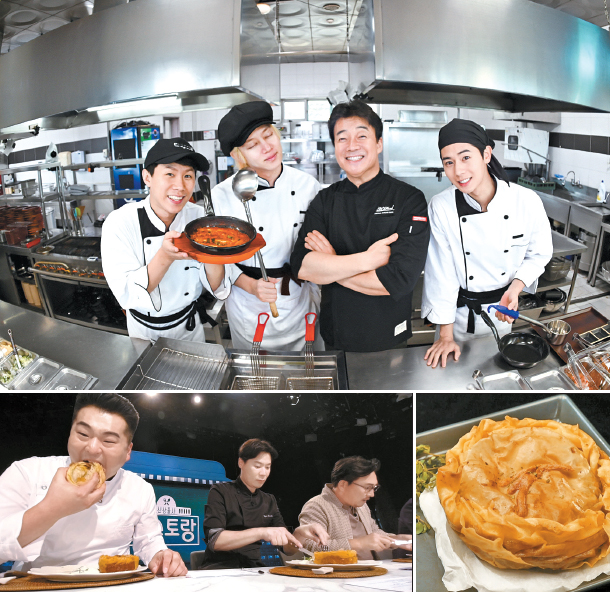 Top: The hosts of the SBS show “Delicious Rendezvous” create new dishes using regional specialties. Food expert and popular TV celebrity Paik Jong-won, second from right, uses unpopular ingredients so that the show can be helpful for local farmers. Above left: The judges of “Star’s Top Recipe at Fun-Staurant” on KBS2 taste a meat pie, above right, created by one of the show’s celebrity contestants. [SBS, KBS]

Local television was filled with food shows for a while over the past few years, and most of the programming was focused on the act of eating as much food as possible. But local broadcasters have recently turned their eyes to a more fundamental topic: where the food on your plate comes from.

By shifting their focus, the networks try to add twists to the cookie-cutter format of their food shows and win back the hearts of viewers who have grown sick of watching too many similar shows.

One such show is “Star’s Top Recipe at Fun-Staurant” on KBS2.

One of the show’s hosts is comedian Lee Young-ja, who is enjoying a second heyday largely thanks to her popular mukbang videos, but the show is mostly focused on local ingredients.

In each episode, an ingredient of the week is unveiled. Six celebrities come up with their own recipes using the week’s ingredient, be it Korean rice or local wheat.

Although the contenders use the same key ingredient, their outcomes vary. During the week that Korean wheat was the main ingredient, one star created gnocchi pasta while another made a meat pie.

Judges from the food industry evaluate the celebrities’ dishes during the Friday night show. The winning dish becomes available the next day at branches of the CU convenience store nationwide.

The concept was a hit, especially among those in their 20s and 30s and regular customers of convenience stores.

After the first episode aired, the winning dish, a noodle with a peanut butter sauce created by comedian Lee Kyung-kyu, sold out on the first day of its release and became the best-selling ready-to-eat meal in the history of the convenience store chain.

Another winning dish on the show was a meat pie created by singer and composer Don Spike.

Most of such ready-to-eat meals available at convenience stores have a fairly short shelf life, and the stores have a daily limit on the number of items that can be sold. When supply failed to meet the demand, some tech-minded consumers pre-ordered the meat pie through the store’s app and later picked up the pie at the store.

The noodles with the peanut sauce and the meat pie are inspired by dishes from Taiwan and South Africa, and some consumers were eager to share that information along with a photo on social media.

Kim Jeong-hun, a judge on the show and the head of the product development team at CU, said, “People in their 20s and 30s are open to new products because of their experience from language exchange programs or backpacking trips. They love to taste dishes with various flavors.

“There is about one month of preparation between the scheduled air date [of the show] and the release of the actual products. Our priority is reproducing the recipe as close to the original as possible,” Kim added.

Hwang Seong-hun, the producer of “Star’s Top Recipe at Fun-Staurant” said, “We chose pork as the third ingredient after seeing a lot of local pig farms hit hard by the spread of African swine fever.

“We will keep searching and using timely ingredients. In addition to that, we are continuously updating the products that are already released so that they can be consumed steadily,” Hwang added.

“Star’s Top Recipe at Fun-Staurant” has regular hosts, but the show is generating significant buzz by casting celebrities like Jung Hye-young and Lee Jung-hyun, who hardly appear on TV shows, as one-time guests.

Another TV show, “Delicious Rendezvous” on SBS, finds inspiration from regional specialties across the nation.

The show aired its pilot during the Chuseok holiday and became a regular show starting this month.

In the first episode, the show’s main host Paik Jong-won, a food expert, entrepreneur and popular TV celebrity, cooked several dishes using a local fish called yangmiri. The saltwater fish is only harvested between November and January in the sea near Gangneung, Gangwon.

As the fish is available for only a few months around Gangneung, it hasn’t been a very popular dish among consumers who are unfamiliar with its taste.

Paik made some yangmiri dishes on the show, and afterwards, the Okgye Expressway Rest Area located on the Donghae Expressway near Gangneung began to sell the cuisine.

E-mart, which sponsors the show, is also selling the fish at branches of the discount chain store nationwide.

Making the best use of local foods was an idea Paik had been thinking of for two years.

He made some attempts to execute the concept on his private YouTube channel after he saw the prices of onions hitting rock bottom due to a supply surplus earlier this year.

Paik introduced several ways of cooking onions at home through his YouTube channel, and his videos actually helped increase the sales of onions.

Lee Gwan-won, the producer of “Delicious Rendezvous” said, “It doesn’t have to be an expressway rest area. We’re willing to go anywhere, such as airports, train stations and bus terminals, as long as the places attract a lot of people. We’ll introduce other seasonal, local ingredients region by region in the future.”

“Food shows are everywhere on TV and YouTube. What matters now is finding out the meaning of the food we’re making and selling. ‘Delicious Rendezvous’ is likely to boost the local economy and help local farmers,” said Jeong.

“Since ‘Star’s Top Recipe at Fun-Staurant’ donates some of its proceeds by selling winning dishes to undernourished children, the network can work for a good cause [through the show].”

Jeong Jae-hoon, a pharmacist who also writes food columns, said “People inside the food industry nowadays want to taste regional characteristics in the food they eat. In that sense, shows [that put an emphasis on a food’s origin] are keeping up with the trend.”

He continued, “Samlip released 24 different flavors of hoppang this year alone, and the fillings vary from those made with some nuts to a spicy red pepper paste sauce.”

Hoppang is a type of steamed bread filled with red bean paste, but Samlip, a local bakery brand, adds varieties to its seasonal bread by filling it with diverse fillings.

“I see more young people are becoming open to something new. They are shifting from neophobics to neophiliacs,” Jeong added.